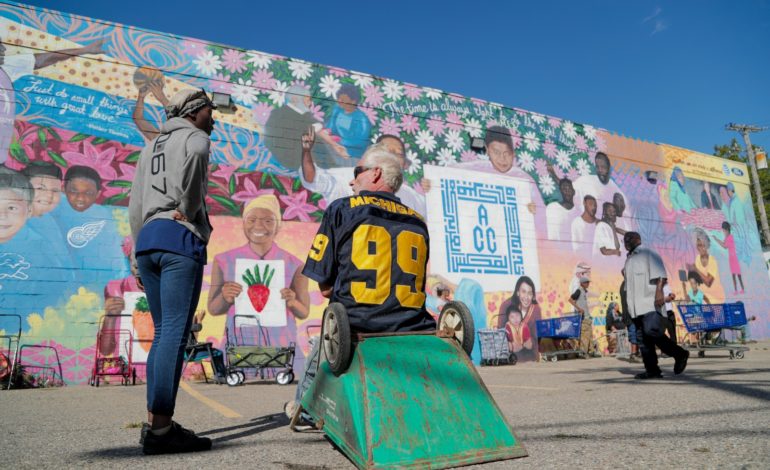 Food recipients wait outside of an ACC food pantry on Seven Mile road in what's known as Chaldean Town. The Seven Mile Project hopes to bring economic renewal in the once abandoned neighborhood. All Photos: Imad Muhammed/The Arab American News

DETROIT – A usually quiet neighborhood on Seven Mile Road near John R appeared bustling with life on a pleasant, sunny Tuesday morning as a team of volunteers worked hard to organize a bimonthly food pantry.

By 11 a.m., a large crowd of the area needy had convened on the four-building complex used by the Arab American and Chaldean Council (ACC) as part of a neighborhood revitalization project the organization began in 1995.

The food pantry is just one ACC service in this Detroit neighborhood.

ACC, which enables the implementation of social services through its now large and complexly interrelated service network across Southeast Michigan, recently celebrated 40 years in the state.

The food pantry partners with several local companies for an active and strong volunteer base. Forgotten Harvest picks up food from various sources, such as chain grocery stores in the area and its own farms.

Large Forgotten Harvest trucks haul fresh fruit and vegetables and other groceries by the pallet-load every second and fourth Tuesday. Volunteer teams sort food items into packages to distribute to a line of individuals and families that depend on them for food security through the month.

“We get from 28 to 31,000 pounds of food each distribution,” volunteer coordinator and ACC service specialist Fred Batayeh told The Arab American News. “That’s food for 300 families on average per give away.”

An operation that size requires a communication and logistics system that relies on the dedication of both ACC staff and the many volunteers that make the pantry days a reality for area Detroiters.

As a testament to the effectiveness of the volunteer program, when a pallet jack malfunction delayed the pantry that morning, Batayeh worked hard to resolve the situation by mobilizing his team members from across the campus.

The particular Seven Mile neighborhood is an area of choice for the ACC because of its proximity to a large Chaldean population. The area itself is known as Chaldean Town due to a century of migration to the area. ACC’s services extend to any and all residents of the area, however.

“We serve everyone,” Batayeh said. “Down here on Seven Mile, we serve a mostly mainstream clientele.

“We have offices in all three counties. These counties now have a new wave of people that have migrated to (them). ACC has a done a great job making sure that our offices and our employees mirror the clientele that we serve. We have a really good mix of people.”

The Seven Mile Project is an ongoing effort to inject economic activity into the once abandoned area. ACC hopes to revitalize and develop the neighborhood in three overlapping phases.

This includes the ownership and development of commercial and residential properties to create a dynamic and recognizable Detroit neighborhood, much like adjacent recently developed neighborhoods in other parts of the city.

The Seven Mile Project is an ongoing effort to inject economic activity into the once abandoned area. ACC hopes to revitalize and develop the neighborhood in three overlapping phases.

Development doesn’t always favor existing area residents and most often brings with it threats of displacement and gentrification through rising property costs and a change in neighborhood character. Batayeh was keen to point out that ACC planned to build on already existing relationships and outreach with the area’s clients. This means keeping the spirit of neighborhood ownership and input intact.

“These are the people that have kept us here,” he said. “People know this is their gymnasium, their food drive.”

ACC volunteer Gloria Trammell once found herself in the line of people depending on the pantry for groceries. She has been involved in the other side of the operation for five years and has also been charged with running orientations for new volunteers.

“I used to come and receive food from the ACC,” she said. “I used to get in the line and get a number like everyone else.

“I transitioned one day when I realized they needed help. I was born and raised in Detroit. It was very hard for us. I have six brothers and five sisters. We were on food stamps and my mother had never had a job.”

Trammell has seen first-hand the effects of the food program on those who rely on it. Many have to make the hard choice between paying rent and utilities and have enough healthy food for the month.

One recipient, who lives 15 miles away from the pantry, said the food program made a crucial difference in her life. A recent arrival, she had also become aware of the campus’s behavioral and addiction therapy program and was considering signing up for those services.

A view from the center: Dr. Haifa Fakhouri reflects on ACC’s 40 year history

ACC President and CEO Dr. Haifa Fakhouri spoke about the organization’s long history ahead of a 40th anniversary awards gala at the Renaissance Ballroom in Detroit on September 28.

“When I was working with the United Nations in the mid 70s and early 80s, I saw problems facing refugees coming through refugee pipelines to come to the U.S.,” Fakhouri said. “As someone from Michigan, I was concerned about the future of the refugees.

“They came to Michigan because of its institutions. They related to other members of the community. At that time, we did not have a professional organization dealing with the needs of new immigrants.” Thanks to seed money from various donors, ACC started as one-person office in 1979, in the International Institute in Detroit, a site still known as an immigrant hub, and saw exponential growth in the next 10 years. It has 12 outreach centers throughout Metro Detroit, providing counseling, healthcare, employment training and job placement, translation, interpretation, immigration and youth services.

“We started to assess the community’s needs as we moved along with building the structure of ACC,” Fakhouri said. “We worked with the community in different areas, from the social to the psychological to language and employment and intercultural relationship with the major institutions in Michigan.”

ACC also runs a major refugee medial program that screens refugees before they go through the permanent residency process.

“Since we primarily utilize government funding, we end up saving the government money by doing the services ourselves since we know the community and know the clients,” Fakhouri said.

Optimistic projections show an influx of refugees to Michigan once the so-called Muslim ban is finally lifted.

“Michigan is number four on the national map for receiving refugees,” Fakhouri said. “People may not be aware of a second migration to our state, but after Arab refugees have been resettled in other places, they often turn to Michigan because of our Arab community.”

Fakhouri and the ACC are ready for this new wave and hope to continue its work creating a healthy and dignified future for the people of Southeast Michigan.