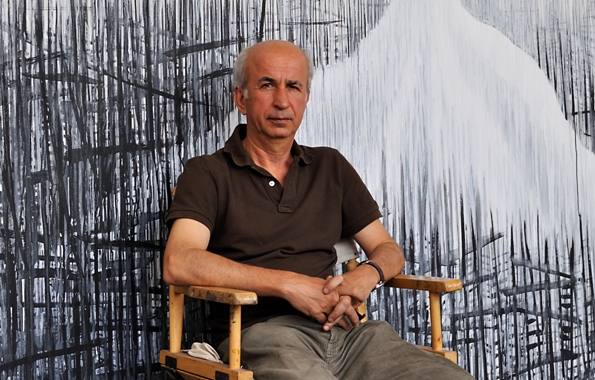 Artist Walid Siti at his art exhibition, "The Black Tower."

MINNEAPOLIS, MN — The Arab World consists of 22 different countries and boasts far more diversity of viewpoints, opinions, ethnicities and other aspects than it is often given credit for in the media, especially in the world of art.

Now, a new fall exhibition at the Minnesota Museum of American Art is hoping to showcase aspects of that diversity, and the imagination of Arabs and Arab Americans, partnering with a St. Paul-based Arab Arts organization to present “History is Not Here: Art and the Arab Imaginary.”

“We live in a culture that pigeon-holes us. It’s a burden our community bears,” said Lana Barkawi, executive and artistic director of Mizna, which promotes Arab American culture through programming and its art/literary journal.

As Mizna celebrates its 20th anniversary, the exhibition is being promoted across the region as a way to examine various social, cultural and political viewpoints on Arab Americans and Arab culture.

Russ White, the editor of MPLSArt.com, was impressed by the exhibit, a breath of fresh air compared with stereotypical, monolithic portrayals of Arabs and Arab Americans.

“The curators offer no Arab monolith, no singular voice, but instead a chorus of wildly different styles, subjects and media. There may be no history here, but there is humor, vibrancy, sensuality, urgency and, above all, individuality.”

Controversial geopolitical themes, a staple of the Arab World narrative, are widely present in the exhibit, however.

Included is work by Basel Abbas and Ruanne Abou-Rahme, artists based in both Palestine and New York, who work with the topic of “alternative histories.”

In their exhibition, they use dried flowers and handwritten notes to create fictional narratives, reframing histories and challenging the ways that Palestine’s history has been portrayed in “And yet my mask is powerful (Fragments 1-3)(2016).”

They also take on the issue of how art galleries acquire their works, recreating Neolithic masks which were stolen from the West Bank and now are part of a private Israeli collection, using 3D technology.

“It’s a questioning of museum studies and how artifacts are acquired,” one of the show’s curators, Maymanah Farhat, said. “How do you take an object in a museum we have no access to, and give it another narrative?”

Walid Siti, who was born in Iraqi-Kurdistan and now lives in London, features a series of drawings called “The Black Tower” in the exhibit, which calls to mind images of the Tower of Babel. His drawings show ways that historical buildings have been appropriated into a Western art style over the years.

Another work that also utilizes 3D printed models is Ala Younis’ “Plan (fem.) for Greater Baghdad”, which uses photographs, copies of newspaper articles and letters to highlight the roles of female artists, architects and others who helped bring a stadium to fruition in Baghdad in 1980. The model of the stadium is surrounded by female figures while Younis narrates the true stories surrounding its creation that have been erased from the history books.

The exhibit opened this month and runs through January 5 at the Minnesota Museum of Modern Art at 350 Robert Street North in St. Paul.

For more information or to buy tickets, visit the organization’s website at https://mmaa.org.