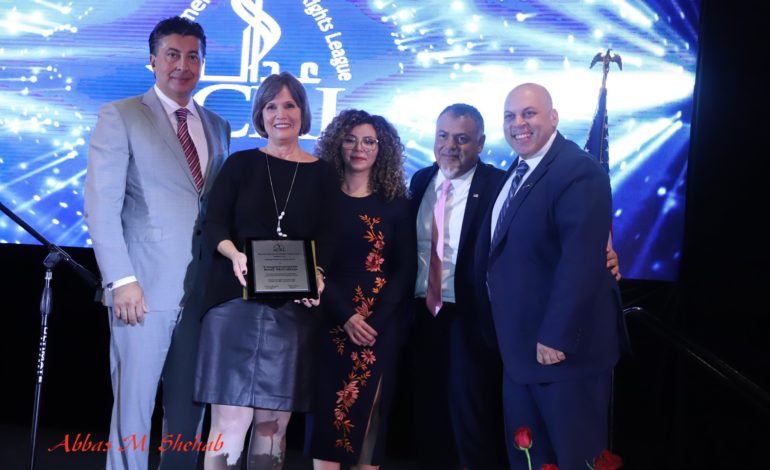 Locally, the Courage in Public Service Award was given to Fadwa Hammoud, who became the nation’s first Muslim American solicitor general in January.

Hammoud, a Dearborn resident who has been put in charge of prosecuting those responsible for the Flint Water Crisis, spoke about the importance of unity in the face of shared challenges.

“Thank you for bringing us together for a common cause this evening,” Hammoud said, thanking her husband, Ali Hammoud, for his support, as well as her colleagues, including Wayne County Prosecutor Kym Worthy, who was among those in attendance, and Attorney General Dana Nessel.

“This is our greatest advantage,” Hammoud said. “This is the answer to the manufactured fear that tells us that our difference is our destiny.

“This is the strength that we must draw upon in the fight to defend our rights and our liberties from constant attack.”

The Civil Rights Achievement Award was given to the Council on American-Islamic Relations of Michigan. The organization has been active during a time when reports of discrimination against Muslim Americans and immigrants have been rising.

The ACRL and CAIR-MI have worked together on numerous, major cases, including the push for transparency and the protection of innocent people from being put on the government’s “no fly” watch list. The award was accepted by Amy Doukoure of CAIR-MI, who pledged that the organization will continue fighting for the rights of Arab and Muslim Americans.

Reverend Wendell Anthony, an ACRL board member and president of the Detroit Branch NAACP, also spoke, encouraging the diverse audience to speak up for the voiceless and to honor the memory of Dr. Martin Luther King, Jr., evoking Dr. King’s quote, “In the end, we will remember not the words of our enemies, but the silence of our friends.”

The keynote speaker for the evening was U.S. Rep. Betty McCollum (D-MN), who introduced the pending House Bill 2407 that would disallow Israel from using any of the billions of dollars in military funding it receives from the United States each year to pay for the detention, interrogation or torture of Palestinian children living under occupation by the Israeli military.

“Congresswoman McCollum has an impeccable civil rights record and has been a consistent progressive vote,” the ACRL program read.

McCollum, the current vice chair of the U.S. Defense Subcommittee, did not address Dingell’s vote, but called her a “very respected leader in Congress” and praised both her work and that of U.S. Rep. Rashida Tlaib (D-Detroit), who also was in attendance.

McCollum’s speech focused on the fight for equal rights, the importance of staying vigilant and holding government accountable. Her words drew multiple rounds of thunderous applause from the audience.

She also spoke at length about her experiences in pushing for Palestinian rights and recalled the first time she read the Palestinian Anti-Terrorism Act of 2006, which proposed cutting off aid to residents of occupied Palestine who were already gravely struggling.

“I assumed this would be unacceptable to my colleagues,” she said. “Instead I was one of two members who voted against this extreme bill.”

“Within an hour of my vote, my office receive a phone call from an AIPAC representative and I was told that ‘your support for terrorists will have consequences,’” she said.

“They went on to say I would be taken out in the next election. That very day I sent a letter to AIPAC. I told them AIPAC was not welcome in my office until I received a written apology.”

No apology ever came, McCollumn continued, but the letter was leaked to the media and AIPAC denied “everything,” she said.

After the AIPAC incident, McCollum was able to connect with pro-Arab and pro-Palestine groups across the country and began educating herself on the realities of the Arab World in various trips, including to Palestine.

Keeping with the theme of unity on the evening, she spoke out against divisive politics that harm civil rights.

McCollum said she noticed a “terrible symmetry” between the stances of President Trump and Israeli Prime Minister Benjamin Netanyahu and vowed to continue fighting on behalf of Palestinians and civil rights in America among immigrants and Arab Americans.

“I never got a written apology, but I’ve never backed down,” she said. “I’ve been working to advance Palestinian rights ever since then.”