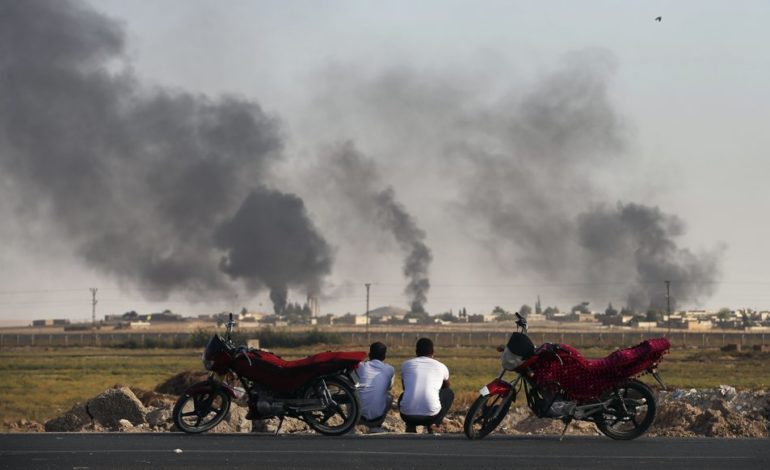 NORTHEAST SYRIA – Turkey, under President Recep Tayyip Erdogan, began its assault on Kurdish-held northeastern Syria on Wednesday after President Trump withdrew U.S. troops from the region, with bombs coming down on Turkish border towns on Thursday.

News agencies report that Turkey’s military is pushing deeper into Syrian territory east of the Euphrates River. Syrian Kurdish forces have replied with rockets fired across the border on to small towns in Southern Turkey, after Turkey began air strikes and artillery pounded Syrian Kurdish targets overnight and in the morning.

Numerous injuries and deaths have been reported in Turkey. Uncertainty in the Syria’s Kurdish held territories after the U.S.’ departure has caused tens of thousands of civilians to flee.

Heavy clashes between Turkish troops and the Kurdish-led Syrian Democratic Forces (SDF) militia have been reported in villages along the border.

President Trump has threatened Turkey with sanctions if it doesn’t play by the rules and has asked for an agreement between the two waring parties.

The Turkish military has hit 181 Kurdish militia targets with its air force and artillery since the start of the operation into northeast Syria, the Turkish defense ministry said.

Troops entered Syria at four points, two of them close to Tal Abyad and two close to Ras al-Ain further east, according to Turkish media reports.

Turkey has said it would create a safe zone in northern Syria to which it wants to expel Syrian refugees from Turkey and resettle them.

Turkey has the largest refugee population in the world, and the presence of Syrians in the country has increasingly led to animosity from Turks who blame them for crime, unemployment and the dilution of Turkish culture.

The biggest fear for the U.S. and its allies is that Turkey’s takeover of Kurdish-controlled areas could see the release of some of the 15,000 ISIS fighters previously captured by the Kurds and their allies.

On Thursday, a divided U.N. Security Council failed to agree on the offensive in the Syrian region. AP reports that European countries have asked for a halt to military action while Syrian ally Russia calling for “restraint” and “direct dialogue” between the two countries.

The five European council members who called the closed meeting would have liked its 15 members to agree on a statement on the Turkish offensive, launched after President Trump suddenly withdrew U.S. forces from the volatile northeast.

The U.S. has insisted that it has not abandoned the Kurds in the area and has called for a protection of civilians and diplomatic measures on Turkey’s part.

U.S. Ambassador to the United Nations Kelly Craft told reporters that Trump “has made abundantly clear” that the United States “has not in any way” endorsed Turkey’s decision to mount a military incursion in northeast Syria.

She said the president has emphasized to Turkey’s government that it bears “full responsibility” for protecting the Kurds and religious minorities, and for ensuring that ISIS militants remain in prison and the extremist group doesn’t reconstitute itself.

As Kurdish forces have called the U.S.’ departure from the region a betrayal, the Syrian government has welcomed the unrest in the region, seeing an opportunity to bring the country’s Kurds back into its national umbrella.

House Republicans to seek sanctions on Turkey over Kurd offensive Twenty-nine of President Trump’s fellow Republicans in the U.S. House of Representatives announced on Thursday they would introduce legislation to impose sanctions against Turkey, underscoring lawmakers unhappiness about its assault on Kurdish forces in Syria.

A day after Republicans and Democrats announced similar legislation in the Senate, the lawmakers — including Republican Leader Kevin McCarthy, Republican Whip Steve Scalise and other party leaders — said they wanted a strong response to Ankara’s aggression.

“President Erdogan and his regime must face serious consequences for mercilessly attacking our Kurdish allies in northern Syria,” Republican Representative Liz Cheney, chairwoman of the House Republican Conference, said in a statement.

It was not immediately clear how the legislation would fare in the House of Representatives, which is controlled by Democrats.

In a rare break from Trump, some of his fellow Republicans have sharply criticized the president’s decision.

Senator Lindsey Graham, a co-sponsor of the Senate sanctions package, announced on Wednesday, said it was made “completely against everybody else’s advice.”

The House Republicans behind Thursday’s announcements stressed that their intention was to strike back at Ankara in statements that did not criticize Trump.

On Thursday, Israeli Prime Minister Benjamin Netanyahu condemned Turkey’s military incursion against a Kurdish militia in northeast Syria and cautioned about the possibility of ethnic cleansing.

“Israel strongly condemns the Turkish invasion of the Kurdish areas in Syria and warns against the ethnic cleansing of the Kurds by Turkey and its proxies,” Netanyahu wrote on Twitter. “Israel is prepared to extend humanitarian assistance to the gallant Kurdish people.”