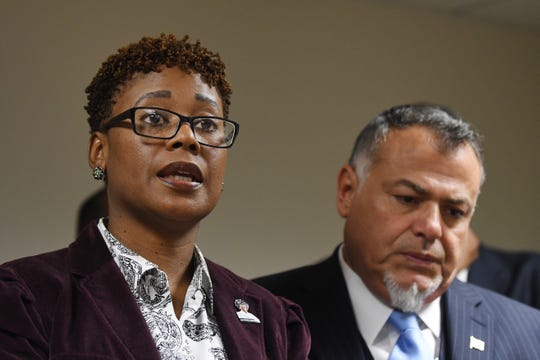 DETROIT — Rhonda Powell, the former director of the Macomb County Department of Health and Community Services, is suing County Executive Mark Hackel and Deputy County Executive John Paul Rea in a whistleblower lawsuit alleging that her firing occurred in retaliation for her efforts to investigate employee complaints of racial discrimination, the Detroit Free Press reported.

Powell was the county’s highest ranking African American employee as Health and Community Services director. She revealed during an Oct. 8 press conference with her attorney, Nabih Ayad, at the Penobscot Building in Detroit that she’s suing Hackel and Rea in Macomb County Circuit Court.

Her lawsuit is seeking $5 million in damages. She also filed an inquiry with the U.S. Equal Employment Opportunity Commission about her termination on September 5, Ayad said.

Powell is a defendant in a separate whistleblower lawsuit filed in federal court in June against her and the county, the Free Press reported.

That lawsuit was filed by Ernest Cawvey, who says Powell and the county retaliated against him over an investigation that questioned the time sheets of three employees who were friends of Powell’s.

A Brighton resident, Cawvey was director of Macomb Community Action and reported to Powell until he was “abruptly terminated” on March 18, the report said. A jury trial is set for July 2020 in his lawsuit.

Powell claims in her own whistleblower lawsuit that she was terminated after reaching out to the Michigan Department of Civil Rights regarding county employee complaints of racially discriminatory behavior at work that were not addressed.

“As soon as I reached out to the Michigan Department of Civil Rights, I was terminated by the deputy county executive,” Powell said at the news conference. “But, at the same time, I was also offered hush money by the HR director in exchange for my silence. It is my belief, however, that real leaders protect the vulnerable and not prey on them.”