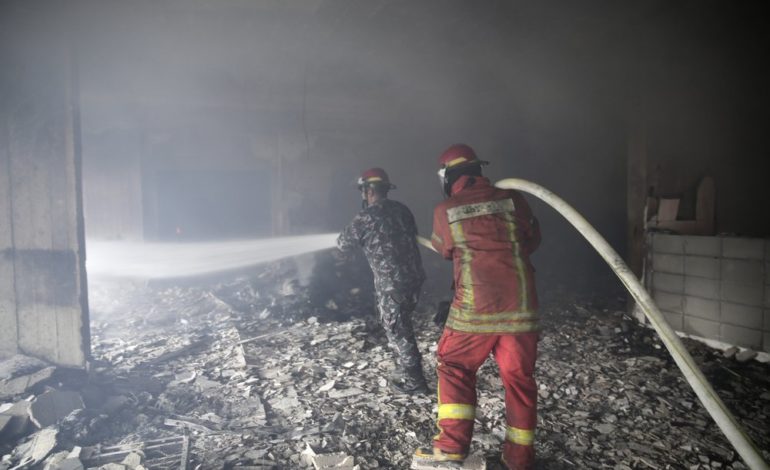 Lebanese fire fighters in a building in the town of Damour, just south of Beirut, that was burnt in strong wildfires overnight on Tuesday, October 15. Beirut resident Ghida El Masri rushed to join the rescue mission as soon as she became aware of its devastation. Photo: AP Photo/Hassan Ammar

Described by officials as the worst wild fires to have hit the country in decades, the fires were heavily concentrated in the Chouf and Metn regions, in the sprawling Mount Lebanon mountain range east and southeast of the country’s capital.

Fires burned through dense foliage in the towns of Mechref and Damour in Chouf, gaining strength from strong winds and unseasonably high temperatures.

According to Aljazeera, The Lebanese Red Cross announced that it had treated more than 70 people at a field hospital in Damour, mostly for smoke inhalation, minor burns and other light injuries.

Fire crews grew overwhelmed by the scale and ferocity of the fire. Many criticized their government’s inability to handle the disaster, which some researchers in Lebanon have connected to human construction and sprawl in the dense region.

The streets were deserted. It was very dramatic, sad and it was clear that a huge number of people had left their homes immediately. — Volunteer Ghida El Masri

Three aircrafts especially designed to fight fire sat idle on the ground in Beirut, after years of neglect had rendered them incapable of taking part in the firefighting mission.

Instead, Lebanese Civil Defense teams were reportedly fighting the fire into Tuesday with riot vehicles equipped with water cannons.

To make up for this lack, the government is enlisting international aid from neighboring countries. Jordan, Cyprus and Greece sent aircrafts to help the Lebanese army with firefighting operations.

Lebanon’s Prime Minister Saad Hariri said his government will open an investigation into the fires and said that if they turn out to be intentional, those behind them will “pay the price.”

Ghida El Masri told The Arab American News from Beirut that she heard news of the fires, which began shortly after midnight on Monday, and that she knew they were spreading fast and unpredictably.

“I left my work at 3:00 p.m. (on Tuesday) and drove all the way from Beirut to Mechref, which is located in Chouf area,” she said. “The streets were deserted. It was very dramatic, sad and it was clear that a huge number of people had left their homes immediately.”

El Masri said that by Tuesday evening, fire fighters from all over Lebanon had converged on the mountainous region to join forces with rescue mission in order to rescue residents and contain the huge flames growing rapidly from south to north.

“In Mechref, you could see nothing except redness from in the background, flames on the sides of the street,” she said of her harrowing experience. “It was tough. We were many people from different regions and sects, all working together.” Fire reaches the backyard of a house in Mechref. Photo: EPA

Volunteers like El Masri worked hard to pack and distribute food and water to those effected, some of whom were now homeless. They even had to fight fires themselves near residential streets as Civil Defense efforts proved insufficient.

A valley near the town could be seen engulfed in a growing fire with no way to traverse the valley in order to extinguish the flames.

Around 7:30 p.m., an unexpected thunderstorm brought much needed rain to the valley, saving what was left of the sacred mountain region and its beauty. Blazes billow after fires broke out around the village of Meshref in Lebanon’s Shouf mountains, southeast of the capital Beirut, on October 15. Flames devoured large swaths of land in several Lebanese and Syrian regions.  Photo: Joseph Eid/AFP

“The fires have caused irreparable damage to Lebanon’s nature as well as its residents, including American citizens who reside in Lebanon,” Dingell said. “When your friend’s house is on fire you don’t ask what caused the fire. Instead you do all you can to help. That is the current situation we’re facing.

“As a member of Congress with a large Lebanese American constituency, this letter is to request you take urgent action to address this situation and that any assistance, resources and aid available be provided to the fullest extent possible,” she added.