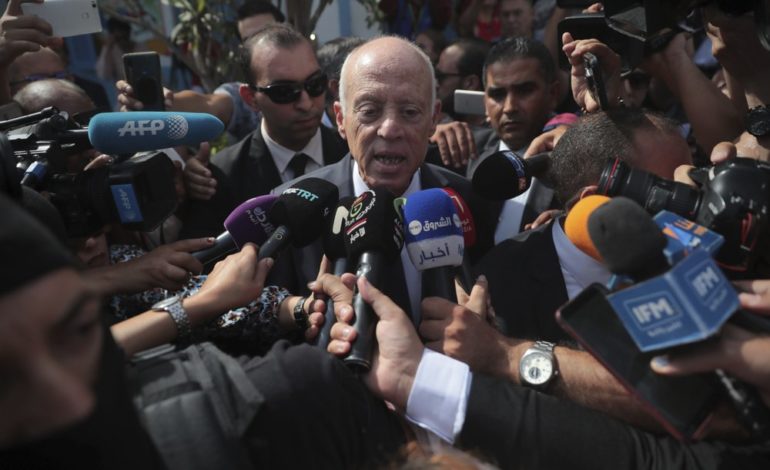 In a news conference, commission head Nabil Baffoun said the results were definitive since no appeal by opposition had been made to contest them.

The commission reported that Saied, who hasn’t held elected office before, received 72.71 percent of the vote. His opponent, media mogul Nabil Karoui, got 27.29 percent.

The commission said that Saied got a majority of the votes in each of the 33 electoral districts. He exceeded 90 percent in six traditionally very conservative southern districts. Kais Saied has promised to overhaul the country’s governing structure to give more power to young people and local governments.

The 61-year-old Saied is an independent outsider but has support from moderate Islamist party Ennahdha, which won Tunisia’s parliamentary election last week.

He has promised to overhaul the country’s governing structure to give more power to young people and local governments.

Karoui, 56, told supporters Sunday the race wasn’t over because his legal team would explore options. He was arrested Aug. 23 in a corruption investigation and released with only two days left to campaign.

French President Emmanuel Macron congratulated Saied for his election in a phone call Monday and wished him “success for Tunisia.”

Macron stressed the Tunisian people’s “democratic mobilization” over the past several weeks. He told Saied that he intends to pursue and enhance the partnership between the two countries.

Egyptian President Abdel-Fattah el-Sissi congratulated the Tunisian people and the elected president in a written statement.

Parliament is expected to soon set a date for an extraordinary session during which the new president will be sworn in and formally start his five-year mandate.