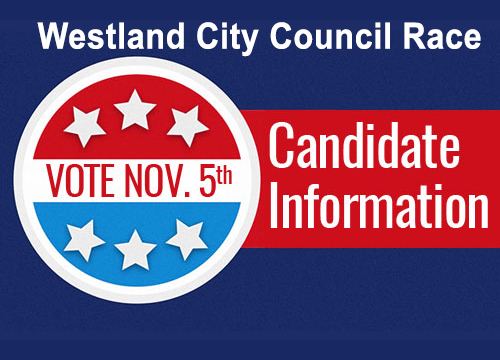 Only Godbout, the current City Council president, and Londeau are incumbents in the race.

Four candidates get elected to Westland’s City Council every two years. The top three vote getters get a four year term and the fourth place finisher gets a two year term.

At the first meeting in January, every other year, the seven-member Council votes for and nominates a president and a president pro tempore.

City Clerk Richard LeBlanc is also up for reelection and is running unopposed.

It is the 10th largest city and 12th largest municipality in Michigan. According to the 2010 census, there were 84,094 people, 35,886 households and 21,289 families residing in the city. The census also enumerated that 75.8 percent of the city was White.

Several key issues affecting the city have made news in the run up to the November elections, though economic development and improving safety and city services appears to be the number one issue for most candidates.

“Two main issues that I hear from residents are recycling and public safety,” Gilbert told The Arab American News. “I’ve addressed both of those issues.”

Gilbert has consulted with city council members from other cities to come up with solutions toward efficient recycling methods. He has a plan for increasing public safety that is unique to the state of Michigan: Community paramedics or CPs. CPs in Westland, or any city that files with the state’s legislature, will visit and check up on seniors and other residents for followups, prescription drop offs and other services, with the city in turn billing insurance companies and revenues going towards hiring more public safety officers.

Dallas, Texas was able to raise more than $500,000 in the first six months after introducing CPs.

“I am excited to have AAPAC’s endorsement because it testifies to my commitment to diversity in my community,” said Gilbert, a U.S. Marine Corps veteran who owns a professional investigation agency in the city. “I’ve owned my business for almost 16 years and have provided services for various Arab American businesses and individuals.

“This is what excites me about Westland,” he added. “This year we have increased cultural diversity in the city through employment than ever before. I think this why AAPAC has jumped on board in the city of Westland.”

Godbout said this loss in revenue to the city’s general fund has made maintaining crucial city services like fire, police and trash pickup evermore challenging.

“We’ve been able to keep a balanced budget,” he added. “We look at the budget in two-year increments and actually have a five-year forecast when we do the budget process. That way we can see where we are and where we need to be, moving forward.”

Godbout was appointed to City Council in 2000 and then won a special election to attain a two-year open seat. He’s had four year seats since that time.

“We need to be able to provide good services to our residents,” he said about his vision for City Council going forward. “We need to work on improving economic development in some prime areas that need it. We need to continue to look for avenues to foster this growth and attract businesses to come and take advantage of these areas.” The city has recently attempted to align its marijuana use and business laws with state laws after Michigan residents voted yes on a proposal to legalize the purchase, possession and use of marijuana for recreational purposes.

The City Council went into the exploration stage for the issue in July in a study session.

So far, city officials have not considered the ballot initiative for the November election. Green has expressed disappointment that officials and other Council members have not thrown their support behind the initiative.

Green said a few months back that she would be announcing details of community meetings and petition drives for the initiative in the near future and that she was working with lawyers to draft the petition and its details.

No new updates regarding her petition efforts have come out in recent weeks, though Green has said members of the community with whom she has talked overwhelmingly support electing Council members by district.