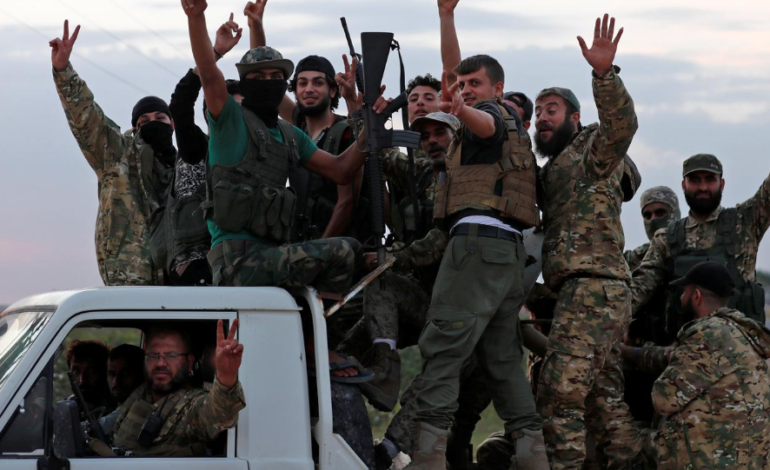 Turkey-backed Syrian rebel fighters drive on top of a truck to cross into Syria, near the border town of Akcakale in Sanliurfa province, Turkey, October 17. REUTERS/Murad Sezer

ANKARA — A five-day cease-fire has been agreed upon in northeast Syria to allow for the withdrawal of Kurdish forces, Vice President Pence said on Thursday.

“Today the United States and Turkey have agreed to a cease-fire in Syria,” Pence told a news conference after more than four hours of talks at the presidential palace in Ankara, Reuters reported after speaking with Turkish President Tayyip Erdogan.

Pence had flown to the country to call for an end to Turkey’s military excursion called Operation Peace Spring, during which the country had been aiming to clear Syrian Kurdish fighters from a mile deep “safe zone” along the border.

“The Turkish side will pause Operation Peace Spring in order to allow for the withdrawal of YPG forces from the safe zone for 120 hours,” Pence said.

The term YPG stands for People’s Protection Units when translated.

General Mazloum Abdi, commander of the Syrian Democratic Forces, said the SDF is ready to abide by the cease-fire and will do all that is necessary to achieve it, according to Majdoleen Hassan, the SDF’s co-chair.

Further sanctions will not be imposed on Turkey as part of the agreement, Pence said.

But Turkish Foreign Minister Mevlut Cavusoglu said the agreement should not be considered a cease-fire.

“We will pause; this is not a cease-fire,” he said, according to CNN. “A cease-fire can only be between two legitimate entities.”

Also, according to CNN, a senior unnamed U.S. official said that the deal is “essentially validating” what Turkey did.

“This is essentially the U.S. validating what Turkey did and allowing them to annex a portion of Syria and displace the Kurdish population,” the official said.

The official also said that Turkey ended up winning the agreement. Vice President Mike Pence meets with Turkish President Recep Tayyip Erdogan at the Presidential Palace for talks on the Kurds and Syria, Thursday, Oct. 17, in Ankara, Turkey. – Photo by AP

“This is what Turkey wanted and what POTUS green-lighted,” the official said. “I do think one reason Turkey agreed to it is because the Kurds have put up more of a resistance and they could not advance south any further as a result. If we don’t impose sanctions then Turkey wins big time.”

President Trump, speaking from the tarmac at Naval Air Station Joint Reserve Base in Forth Worth, called the U.S.-announced agreement an “incredible outcome” that saved lives.

“ISIS is totally under control and we’re continuing to capture more,” Trump later said at a ribbon cutting ceremony for a factory in Texas, defending his Middle East policy.

Also as terms of the agreement, the U.S. convinced the Syrian Kurds/SDF to dismantle their defensive fortifications and pull troops from the border to appease Turkey.

The U.S. has also conducted joint patrols and shared intelligence with the Turkish military.

The Kurdish forces that once allied with the U.S. in the fight against ISIS will now withdraw over the coming days, James Jeffrey, the U.S. Envoy for Syria, said.

“The Turkish army has seized a great deal of territory in a very short period of time,” Jeffrey told reporters traveling with Secretary of State Mike Pompeo.

Jeffrey had the following to say when asked when Syria decided not to call the agreement a cease-fire:

“We use the word cease-fire,” he said. “The Turks do not because it’s not in the agreement. What we mean is, and we define this very carefully, a cease-fire is no forward movement of troops on the ground and no military action other than self-defense.”