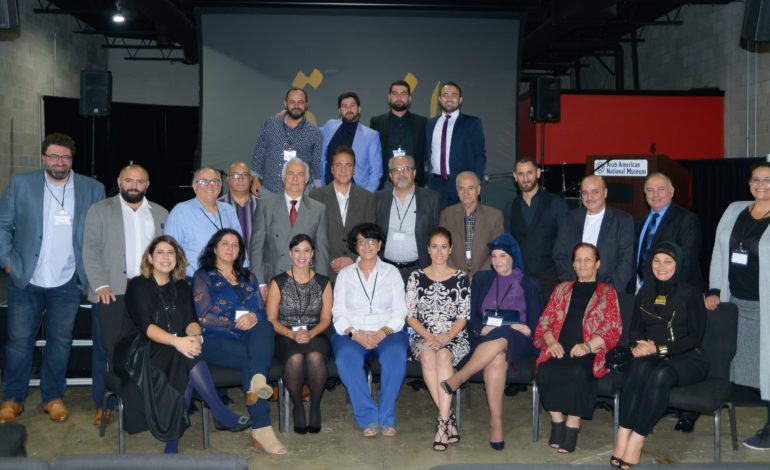 DEARBORN — Members of the greater Dearborn area public met for a rationalist meeting of the minds last Wednesday in the Annex of the Arab American Museum on Michigan Avenue at the first annual Alnadwa Free Thinking Society Dinner.

Honorees and speakers covered a wide array of topics relating to scientific rationalist thinking, free expression, cooperation and betterment of society and above all, the promotion of free thinking and creativity.

By dinner time, a large crowd of spectators, organization members and visitors gathered to hear extended speeches from community notables like Aoun Jaber, adjunct professor of Arabic language in the Department of Near Eastern Studies at Wayne State University; Sukoon magazine Publisher and Editor-in-Chief Rewa Zeinati, who read from her poem “The F-Word”, and educator Wissam Charafeddine.

Though scientific rationalism and free thinking were at the core of the evening’s discussion, Alnadwa has less in common with modern day American and European atheist and agnostic intellectual tradition, though some parallels can be made.

Instead, it seems to build on a vast and rich history of scientific thought and intellectual tradition in the Arab world. Speakers seemed to wrestle with questions of modernizing this tradition and refocusing free thinking in the Arab world within a more globalized framework.

“We are meeting today in the name of the ‘free thinking society’ in an effort to inject new energy into our society to activate a movement against inertia,” Abbas Al Haj-Ahmed said. “A movement that is trying to project constructive thinking with practical activism.”

“I am honored and pleased to speak to you on the occasion of the first anniversary of the organization of the Alnadwa free thinking Society and to be a witness to its birth to join other active associations on the cultural level,” Abuali said.

She addressed the importance of understanding culture, language and art as part of a broader mechanism of society and questioned the need to separate it from the material facts of technology and science that grounds cultural development.

She also reminded attendees of the crucial role the Arabic language plays as the “steady source of (Arabic) culture.”

“We are meeting today in the name of the ‘free thinking society’ in an effort to inject new energy into our society to activate a movement against inertia,” Haj-Ahmed said, “a movement that is trying to project constructive thinking with practical activism.”

He spoke eloquently of the need for modernizing thought, within the Arab diaspora and beyond.

“Between the concerns of our countries, our societies and our policies, and the revolution of the global information companies, the elixir of conflict appears in one place,” he said. “In the mind. And to innovate, this mind must be free.”

Haj-Ahmed emphasized Arab American contributions and a need for progress in the field of scientific and intellectual production, building on the enlightenment of “Copernicus, Tesla and Elon Musk.

“A mark that will be made by our community with all its diversity in Dearborn and its neighboring areas,” he said.

Charafeddine said the Free Thinking Society’s work was “all about freedom in searching for truth and a better life.

“It is freedom to cherish the beautiful and wise from our heritage and culture and reject that which is harmful or sublime,” he said.

“The struggle between logic, reason and empiricism against authority, tradition and dogma is as old as humanity itself,” he added. “Throughout history, forming your own ideas and opinions rather than accepting those of other people without sufficient evidence was not a popular idea in totalitarian societies.

“You cannot subjugate humanity to slavery, inequality and oppression of minorities and women if you allow free thinking.”

He emphasized that the organization believed in the separation of religion from state, of defending those persecuted for their secular beliefs and championing peoples resistance against tyranny and apartheid, citing Palestine as a symbol for this struggle.

Alnadwa member Dr. Abbas Youssef posted on the organization’s website recently that his organization “requires members to form opinions on the basis of reason, independently of tradition, authority or established belief.”

“Freethinkers are naturalistic,” he said. “Truth is the degree to which a statement corresponds with reality. Reality is limited to that which is directly perceivable through our natural senses or indirectly ascertained through the proper use of reason.”

He also clarified that the organization sought to create a space for conversation without prejudice towards those who may hold beliefs in a higher power as much as those who do not.

“Alnadwa will be a safe place for individuals to express their opinions and beliefs without prejudice, labeling, or fear of being persecuted or categorized as an outcast,” he added.

It grew clear from the evening’s event, which ended in an impromptu dabke circle facilitated by a performance by Ziad Nasr and Arab Music Band, that the organizers urged local Arab Americans to think for themselves and not allow dogmatic thinking and stifling traditions to undermine their own free thinking.

It is also apparent that the organization is not anti-religious in a political sense, but does promote thinking on a rational basis and outside of the confines of a religious framework.

More information about the organization can be found at https://www.alnadwa.org