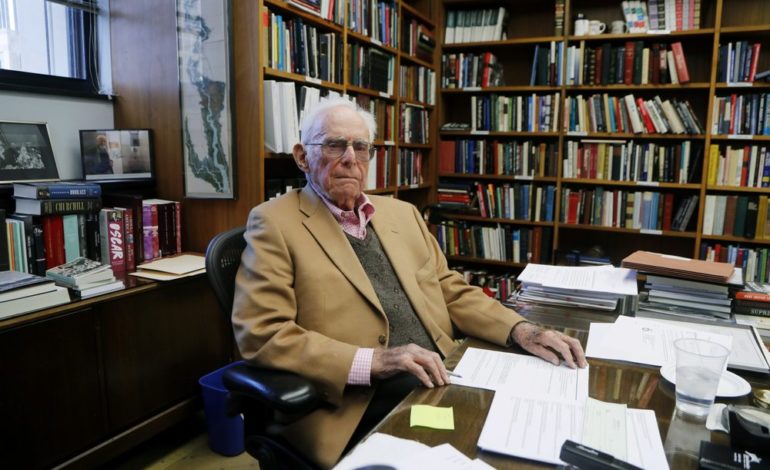 U.S. District Judge Avern Cohn in his office in Detroit. The judge acknowledged that prison time was unfair for the harmless transfer of money to families in a war-torn country in desperate need. Photo: AP/Carlos Osorio

DETROIT – U.S. District Judge Avern Cohn refused to send to prison a group of Detroit-area men who transferred millions of dollars to Yemen without registering as a money transfer business.

Cohn refused such sentencing, even though legal guidelines called for a few or more of the men to see prison time.

The group of men reportedly sent about $90 million over a seven year period to the war torn country that has suffered a dire humanitarian crisis, a crippled economy and food and health care shortages.

Federal prosecutors charged nine people since 2018 in an investigation of the wire transfers, claiming the bank accounts had been open for shell business to conceal the ownership of the money and to evade income taxes. The men plead guilty to failing to register money transfer businesses or making false to statement to agents.

Cohn declined to send the men to prison, reasoning that Yemen’s financial system is a mess and that its people desperately needed help.

“Only people without compassion” would object to the light sentences, the 95-year-old judge told The Associated Press.

“As I’ve been here longer,” Cohn said, “I’ve come to the realization that the rules are flexible — at least to me.”

AP reports that Fahd Samaha moved $13 million to Yemen, charging his costumers only 1 percent for his services.

“There were no victims. … He used the extra money to live and take care of his family,” said Samaha’s attorney, Jalal Dallo.

The judge told another man, Hazem Saleh, who faced five years in custody for handling $22.6 million, that it would be unfair to “shed the traditions and practices of your homeland.”

When the cases were assigned to Cohn, he said at a September hearing that conditions in Yemen were “horrendous” and that it would be unfair to send the men to prison, noting that many belonged to conservative families where wives don’t often work outside the home.

As judges don’t have to follow sentencing guidelines, Cohn declined prison time for the men and instead put six under supervised release, a form of probation. Three others await sentencing.

One man, Ahmed Al-Howshabi, told the judge that he sincerely did not understand the rules and regulations behind operating such a money transfer business. Indeed, prosecutors’ own investigation showed no evidence that the scheme was anything more than sending money to relatives in Yemen and possibly avoid taxes.