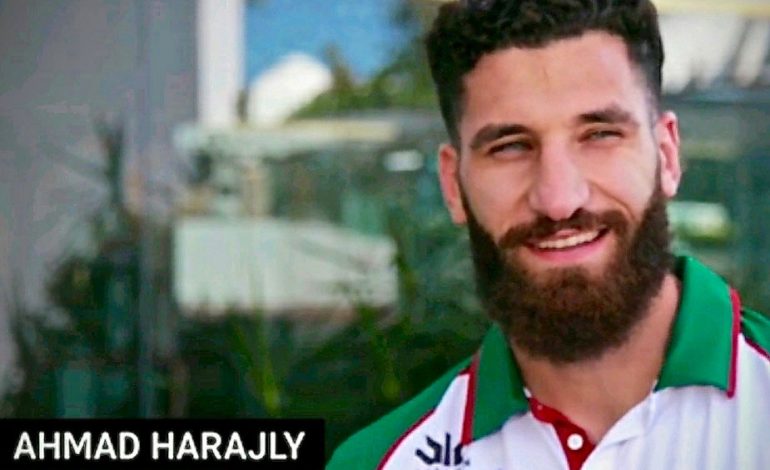 DEARBORN — Michigan sports can often seem dominated by college and pro football, baseball and basketball leagues, overlooking others that have international interest and are no less athletically demanding.

Sports in the Arab American communities in Metro Detroit are no exception to this bias. For instance, not many may know of a rising rugby star, competing on the international stage, who grew up in Dearborn and attended one of its main high schools.

Meet Ahmad Harajly. The 25-year-old Lebanese American has recently made history and broken new ground in a sport not often associated with Dearborn or the Middle East in general, representing the Lebanese Rugby League team at the Rugby League World Cup 9s in Sydney, Australia.

The Lebanese Rugby League, comprised of all Australian Lebanese players except for new recruit Harajly, is based in Sydney.

More of note, however, is his stellar performance during this October’s competition, shocking the rugby world along with his new Lebanese teammates and brethren, to deliver crushing defeats to some of the sport’s giants, France and England.

Ahmad Harajly was born and raised on the east side of Dearborn and attended Dearborn High School.

“I grew up playing pick-up football at Ford Woods park all my childhood,” he told The Arab American News this week.

Though a passion for contact sports remained, rugby piqued his interest and became a viable option when he learned of a unified local team called the Dearborn Silverbacks coached by Pat Khalaf. He put football aside and joined the team in 2011, his junior year of high school.

When asked what he enjoyed about rugby over taking the more traditional football route, he explained that rugby’s international format really appealed to him.

“A lot of top athletic players in the Dearborn community want to pursue scholarships and get sucked into football,” he said. “I always tell people, especially those of the younger generation, that they should consider sports that have global recognition, carry world cups and have an Olympic presence.”

Though unfamiliar with the sport at first, Harajly became an avid follower of rugby and saw it as a missing link in his life.

“Pursuing rugby after this experience became a no brainer,” he said. “The game becomes  part of your life.”

After graduation, Harajly sought opportunity with the reputable and respected Detroit Local Tradesmen team. His on-field acumen caught the eyes of a national team scout at a Midwest championship game.

In 2015, he became one of 50 players selected to try out at the Olympic Training Center in Chula Vista, California. His national rugby career began at that point. His first game representing the U.S. was in Wellington, New Zealand against France in an HSBC 7s world tournament, a variant of rugby union in which teams are made up of seven players playing seven minute halves. He also played against Japan, South Africa and Fiji in the tournament.

“People were skeptical about Lebanon even being in (World Cup 9s) pool,” Harajly said. “They questioned our credibility but we brushed off the criticism and went out there to play the best rugby we could.”

There are two types of rugby played internationally: Union and league. Each has its particular difference in rules and play. Union rugby has a massive international following, though league rugby fares well in England and Australia.

During Harajly’s two-year stint with USA Rugby, in which he was notable for being the only Lebanese player on the national team, he spent a year with Major League Rugby. He still remains on contract with New England as a reserve.

After getting wind of a Lebanon rugby team playing internationally at the Rugby League World Cup in 2017, Harajly knew that he couldn’t pass up an opportunity to represent his heritage in the sport he loved.

“The Lebanon team’s performance in that tournament caught my attention,” he said. “I reached out to them with my resume, expressing an interest in playing for Lebanon. Less than two months later, they told me they were excited to have me represent Lebanon.”

Harajly found himself with his new Australian-Lebanese teammates in a pool with France, England and Wales at the World Cup 9s shortly after.

“People were skeptical about Lebanon even being in that pool,” he said. “They questioned our credibility but we brushed off the criticism and went out there to play the best rugby we could.”

The rest is history, of course. The Lebanon team’s determination paid off in spades, defeating France 12-8, with Harajly making two crucial conversions. England, the second best league team in the world and filled with experienced players, came with full force but lost to Lebanon 16-13. Harajly scored six points total and was instrumental securing possession in high ball plays in both games.

A shoulder injury versus England cost him a go at Wales, a game that Lebanon ended up losing. The team lost out to England for the knock-out round because of England’s higher point differential. Ahmad Harajly comes off the field after an injury during the round two Rugby League World Cup 9s match between England and Lebanon at Bankwest Stadium on October 19, 2019 in Sydney, Australia. – Photo courtesy of Ahmad Harajly

Harajly is proud of his team’s achievements, putting Lebanon athletics on the map.

“Meeting my Lebanese Australian teammates was amazing, sharing our many differences in lifestyle living in the States to Australia,” he said. “But what was amazing was that our homes and communities were identical in every way.

“I felt at home for the short time I was in Sydney. Nothing greater than being around your people of culture especially when you’re half way across the world.”

Harajly resides in Dearborn. After recovery, he will remain active in both union and league rugby. Lebanon can expect him to represent the country again in the 2021 Rugby League World Cup.