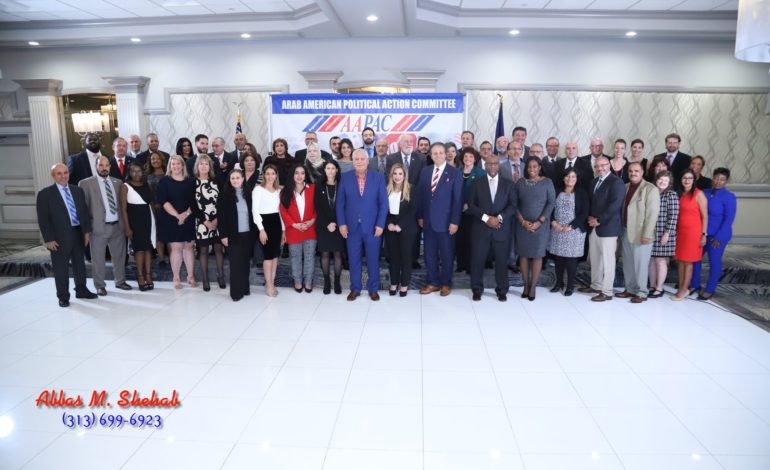 AAPAC members are joined by community members and allies at the 22nd Annual Dinner at Byblos Banquet Hall in Dearborn on Wednesday. The 2019 AAPAC endorsees were announced at the event. All photos: Imad Muhammed/The Arab American News

The usual fanfare and excitement of an AAPAC gala was mixed with serious discussions and passionate calls for solidarity and community-wide efforts to dispel myths about minorities in the country. Its work includes fighting racism and Islamophobia, showing continued strength in solidarity with the people of Palestine and continued commitment to work within the bounds of the American political machinery to create meaningful change.

Besides the who’s who of Arab American civil society members, politicians, business leaders and activists, notables from Michigan’s greater civil, legal and political world were present and gave comments about their long running partnership with AAPAC, further raising the spirit of cooperation and goodwill through the evening’s proceedings.

19th District Court Magistrate and former AAPAC Vice President Ali Hammoud served as master of ceremonies, but was aided by many other AAPAC members who took turns introducing the speakers.

“We gather here, in common cause, to celebrate 22 years of an organization that was first of its kind to bring greater value and awareness to the Arab American community about the value of civic engagement and public service,” Hammoud said.

“We serve under the belief that its important for all communities to organize and engage,” he added. “We are only as good as our collective effort.”

AAPAC President and 20th District Court Magistrate Mona Fadlallah  thanked the community for its continued support of the committee.

She spoke about the stringent and thorough discussion that the organization’s members hold before endorsing issues and candidates. AAPAC’s members consist of a wide array of community members, from public officials to students, professionals and business owners.

“Every member’s input is relevant, regardless of their political stance, age or gender,” she said. “Even non-AAPAC community members are always encouraged to attend AAPAC discussions and presentations regarding proposals or candidates.”

He introduced one of the evening’s honored guests, Dan Lemisch, who served in various positions in the U.S. Attorney’s office for 19 years before retiring to join a private law firm in 2018.

Lemisch spoke about the urgent need for upholding civil rights laws in a country ripe with incidences of discrimination and racist attacks, sometimes coming out of the highest levels of government itself.

“Two of my favorite cases I ever worked on affected this community and I am most proud of them,” he said. “One involved a group that wanted to build an Islamic center in Pittsfield Township.

“Another involved a group that wanted to build a mosque in Sterling Heights. The city fathers and zoning commissions in both of those communities denied their requests. They came up with reasons like the number of parking spaces compared to the number of people using the buildings, creating traffic problems. In Sterling Heights, they said the height of the minarets would be too tall… The truth in these cases, as our investigation showed, was that there were more parking spaces compared to the rest of the neighborhood and the heights of minarets were lower than the churches in the area.”

AAPAC endorsements for 2019 were then announced. AAPAC members deliberated and conducted interviews and research before voting on the following candidates and issues:

Both Michigan Solicitor General Fadwa Hammoud and The Arab American News Publisher Osama Siblani threw their support behind DPS’s BRICS Bond, the only item on the ballot for Dearborn on November 5. Each spoke of the importance of setting priorities for a major school district in need of crucial infrastructure improvements, safety and security.

Siblani introduced Michigan Attorney General Dana Nessel and reminded attendees that AAPAC believed in her as a viable candidate when many underestimated her resolve and wrote her off.

“Were it not for AAPAC and this community in general, I would not be attorney general of the state of Michigan,” Nessel said. “The fact of the matter is, had you not supported me, the person in this position would have been a man that was endorsed by not one, but two anti-Arab American hate groups.”

She said the Arab American Community cared about many of the same issues that affected everyone else in the state, insisting that the environment, consumer protection, utilities and resource protection were a priority for everyone.

“Each and every time the Trump administration has promulgated a rule or an order to harm immigrant communities, we have fought back and have filed lawsuit after lawsuit,” she said, adding that she is proud of this legacy of fighting the president in the legal realm.

A further Community Service Award went to local comedian, Palestinian American activist and University of Mercy School of Law adjunct professor Amer Zahr, who capped off the evening’s list of speakers shortly before dinner with an acerbic call to keep the Palestinian cause at the forefront of Arab American political conversations.

“Our love for Palestine is not something we need to place on the back burner,” he said, speaking to the need for solidarity with the occupied people even if it means breaking with and standing up to friends and allies in power. “It’s at the center of every Arab’s heart.

“It is time to place Palestine at the tip of our tongues,” he added.