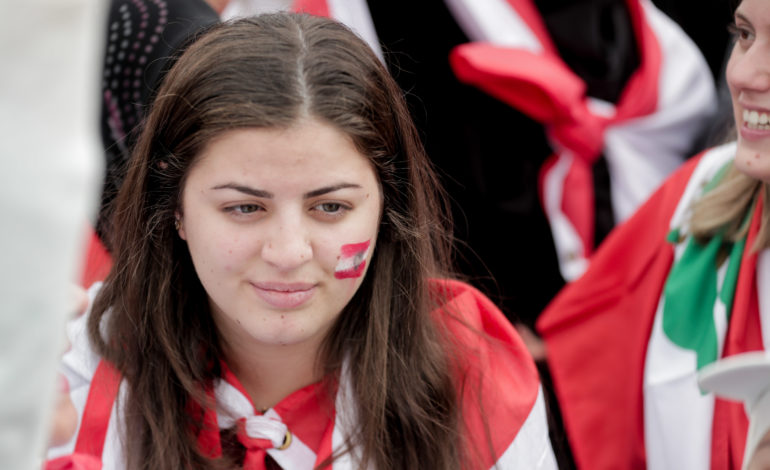 DEARBORN/ANN ARBOR —Protesters from Michigan to California and everywhere in between have rallied in support of demonstrators in Lebanon this past week, sending the message that large-scale change is needed now, and long overdue.

On Wednesday at the University of Michigan, a crowd of nearly 200 people chanted, “The people want the government to step down!” and “We stand with the people of Lebanon”, among other slogans, sending a clear message of support and solidarity in a protest organized by students.

They also played songs, including the Lebanese national anthem.

Hundreds also gathered at Dearborn’s Henry Ford Centennial Library on Sunday, unfurling large Lebanese flags, beating drums and singing songs in support of Lebanon, a country a large portion of them emigrated from in recent decades.

“The purpose of it was to stand in solidarity with the Lebanese people that have been suffering,” said Lebanese American protester Marwan Faraj, 46 of Dearborn, who attended Sunday’s rally.

“We stood in solidarity to support the Lebanese people in this revolution that probably will take some time, but will eventually help their lifestyle for the better.”

Faraj referenced the economic problems that have been plaguing the country for many years.

While many of the protesters in Lebanon lack trust that the reforms they want will be enacted, most, including protesters in Michigan like Faraj, simply want to shake up the stagnant political status quo that has been suffocating the country for years.

“There are a lot of people that feel the Lebanese people’s pain, and all came out to show their solid support for their motherland that’s been suffering from this economic problem for years and years now.”

Protesters in Lebanon are demanding “the downfall of the regime” according to a report from Reuters on Thursday, using the same tagline as 2011’s “Arab Spring” that toppled leaders of four separate countries in the Middle East.

In Lebanon, the country’s closely-aligned, sectarian government will be difficult to oust in the same fashion, but the main parties could agree to a reshuffling that would leave Prime Minister Saad al-Hariri in office but replace other ministers with “technocrats” better qualified to enact badly needed reforms. Such a solution, which has been discussed, would need the support of all of the country’s main parties and also must conform with sectarian power-sharing quotas among Christian and Muslim sects.

The current round of protests first began on October 17 and are the largest of their kind since March 2005, CNN World reported. Protesters originally took to the streets in defiance of a proposed tax on the widely-used messaging service WhatsApp, on which government officials relented.

Now, they are calling for the replacement of the entire political elite in the country as well as for additional reforms and improvements.

Last month saw large-scale gasoline shortages and ATM outages in the country. Lebanon’s poor and marginalized are among those leading the charge for this new round of protests. Currently, the income of the lower 50 percent of the population combined is equal to that of the top 0.1 percent, and Lebanese citizens are tired of waiting for support.

“The fact that you can come together now and say, ‘Yeah we can do these reforms only is proof of how corrupt you really are because never did them before,’” one protester in Beirut, Dayna Ayash, told CNN World. “It just goes to show that you had this power and you never exerted it, except to fill your own pockets.”

Bashar Hallak, a Lebanese American who participated in and helped organize Wednesday’s rally in Ann Arbor, said people came from as far away as Ohio, as well as Dearborn, to join in support. Lebanese media also covered it. “It was great,” Hallak said. “Not only Lebanese people but a lot of people from the Arab community came to show support and stand in solidarity. There was a lot of unity as well.”

Other U.S. protests have taken place in Boston, New York, Cleveland, Los Angeles, Dallas and many other cities and college campuses nationwide.

Hala Abirustom, 23, of Westwood, Massachusetts, said that the economic crisis is so serious overseas that even the best education does not guarantee employment.

“I can’t go back home because nobody can find a job, even the people who have masters, PhDs, like nobody has a job,” she said, adding that the country’s media have censored the protests.

“They’re cutting out the Internet,” she said. “In Lebanon, you put on the news, we’re not on TV. They’re trying to hide this from the world.”

In continued support of protesters overseas, a second Dearborn protest will take place at the Henry Ford Centennial Library at 16301 Michigan Avenue in Dearborn on Sunday, October 27 at 11 a.m.

The protest will be open for all to freely express their political views in support of the revolutionary movement of the Lebanese people, a release from the organizers said.