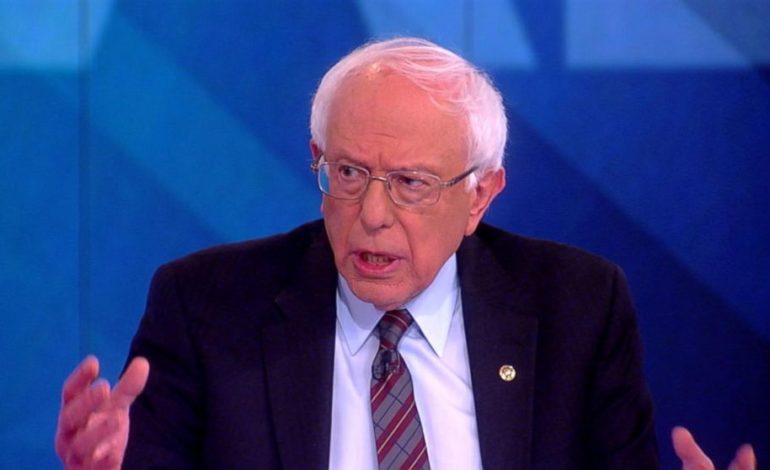 Bernie Sanders, a canddiate in the 2020 presidential election. Photo via ABC News

WASHINGTON, D.C. — United States presidential hopeful Bernie Sanders (I-VT) spoke out against the misuse of U.S. military aid by Israel at a conference on Monday, calling for major change should he be elected president.

“At a time when we spend $3.8 billion on military aid to Israel, we have the right to say to the Israeli government that the United States of America and our taxpayers and our people believe in human rights, we believe in democracy, we will not accept authoritarianism or racism and we demand that the Israeli government sit down with the Palestinian people and negotiate an agreement that works for all parties,” Sanders said at a conference hosted by J Street, an advocacy group whose stated mission is to help end the Arab-Israeli and Israeli-Palestinian conflicts, according to a report from The Hill.

“I would use the leverage, $3.8 billion is a lot of money, and we cannot give it carte blanche to the Israeli government or to any government at all,” he added. “We have the right to demand respect for human rights and democracy.”

The current agreement includes a record $38 million slated to be delivered by the U.S. to Israel over the next ten years. Critics have long decried the agreement because of Israel’s internationally illegal blockade on the Gaza Strip and occupation of the West Bank, which includes expelling tens of thousands of people from their homes.

Sanders specifically mentioned the plight of the people of Gaza in his speech.

“If you want military aid, you’re going to have to fundamentally change your relationship with the people of Gaza,” he said. “In fact, I think it is fair to think that some of that $3.8 billion should go to humanitarian aid to Gaza.”

The senator from Vermont has also said that Israeli Prime Minister Benjamin Netanyahu leads “an extreme right-wing government with many racist tendencies” in regards to its tendencies toward Palestinians in the occupied territories.

Four other 2020 Democratic candidates also spoke at the J Street conference. South Bend, Indiana Mayor Pete Puttigieg and former Housing and Urban Development Secretary Julián Castro expressed openness to conditioning aid so that U.S. assets would not be used for building or annexing settlements in the West Bank.

Senators Amy Klobuchar (D-MN) and Michael Bennet (D-CO) refrained from saying they would place any conditions on aid to Israel, the article said.