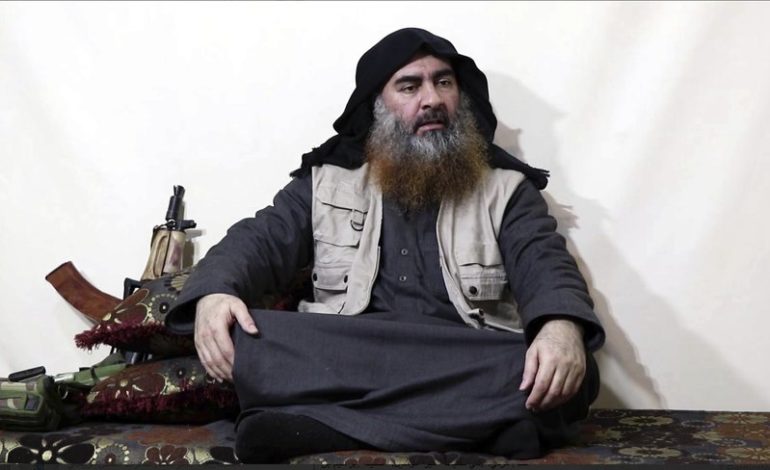 Freeze frame from a video posted on a militant website April 29, purports to show the leader of the ISIS group, Abu Bakr al-Baghdadi, being interviewed by his group's Al-Furqan media outlet. A U.S. official warned that the group has a “deep bench” of militants who could rise to the top to replace al-Baghdadi. Courtesy: AP

WASHINGTON, D.C. — A U.S. counterterrorism official spoke at a House hearing on global national security threats on Wednesday to tell members of congress that a new leader of ISIS will eventually emerge, following the killing of Abu al-Baghdadi in last weekend’s raid.

AP reports that National Counterterrorism Center Acting Director Russell Travers said that though the killing of the ISIS leader by U.S. forces in Syria on Saturday was a “significant” development, the group has a “deep bench” of militants who could rise to the top to replace al-Baghdadi.

When asked by members of congress how Baghdadi’s killing would affect outcomes of future planned attacks by the group, Travers downplayed the impact.

“I actually don’t think it will have much impact,” he said. “If there were significant attacks that were in the planning, that planning will continue. It won’t have that much effect.”

Travers illuminated that ISIS had at least 14,000 fighters in Syria and Iraq, up from when it struggled to maintain its stronghold on its two key regions.

“That’s an important number,” he said. “Because five, six years ago, when ISIS was at its low point, they were down under 1,000. To us, this tells us the insurgency has a lot of options.”

President Trump took to television on Sunday to announce that Abu Bakr al-Baghdadi died in a U.S. special forces raid in northwest Syria.

Baghdadi fled into a dead-end tunnel with his three children where he detonated a suicide vest, killing himself and his children.

The U.S. had offered a $25 million reward for Baghdadi’s capture.

Trump thanked Russia, Turkey, Syria and Iraq for their support in the raid, though the Russian defense ministry said it was not aware of any such assistance.

Information about the tip that led U.S. forces and its aids to locate and kill Baghdadi came out shortly after Trump’s announcement. The process by how the administration disseminated details of the operation to party leaders on the Democratic side of the aisle was criticized by House Speaker Nancy Pelosi (D-CA).

It was revealed on Monday that according to a senior Iraqi intelligence official, an Iraqi aide to al-Baghdadi was killed in western Iraq by a U.S. airstrike a few months back. The official said the aide’s wife was arrested in the operation and handed over by the Americans to Iraqi authorities.

The official said the wife was instrumental as a key source of information on al-Baghdadi’s location and that the Iraqis ultimately passed along information she provided on his coordinates to the United States.

A second Iraqi security official said al-Baghdadi’s brother-in-law was recently arrested by the Iraqis and also helped with information about al-Baghdadi’s whereabouts.