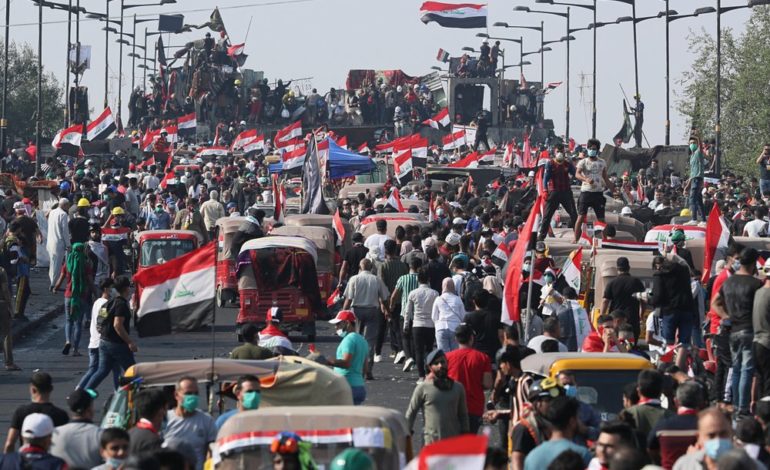 Anti-government protesters gather on the Joumhouriya Bridge leading to the Green Zone during a demonstration in Baghdad on Thursday, October 31. - Photo by AP

DETROIT – A sea-change in Iraqi governance looms as tens of thousands of Iraqis across ethnic and sectarian divides have taken to the streets to demand their right towards prosperity and self-determination.

Prominent support towards the ousting of Prime Minister Adel Abdul Mahdi will likely not be enough to quell the fury behind the throngs that have taken over Baghdad’s Tahrir Sqaure.

Iraqis’ struggles against international escapades in their country and their mistrust of their own ruling elite who cozy up to powerful interests like the United States and Iran has parallels to recent developments in Lebanon and even far flung Chile.

Monitors have reported that more than 250 people have been killed in clashes with security forces and paramilitary groups since protests began on October 1 and eventually swelled into the worst mass unrest in Iraq since the 2003 fall of Saddam Hussein.

Despite Iraq’s vast oil wealth, many Iraqis live under extreme economic constraints and lack of access to clean water, electricity, health care and education. Jobs are hard to come by.

Iraqi President Barham Salih has said that Mahdi had previously agreed to submit a resignation if Iraq’s various political blocs decided on an “acceptable” replacement. Mahdi wants Shi’a cleric Moqtada al-Sadr, one of his main supporters, to agree with Sadr’s rival Hadi al-Amiri on a replacement.

Iraqis on the street instead want a complete overhaul of the governing system in their country, a change that would get rid of governance based on sectarian power-sharing.

Iraqis in Michigan largely stand in solidarity with the people of their homelands, though many differ in the tactics needed to bring about lasting change. This difference itself reflects the complex reality in which many Iraqis find themselves fighting for decency, openness and fairness.

Nabby Yono is the vice president of the Arab American and Chaldean Council (ACC) in Michigan.

“There has been turbulence in the country for the past 16 years,” he told The Arab American News this week. “Iraq has been going from bad to worse.”

The protests began with people revolting on a smaller, more contained level with the scales tipping to produce a critical mass of protest, met with both acquiescence from its political leaders and violent push back from its security forces. Like many Iraqi expats, Yono has been in constant communication with Iraqis on the ground and keeps track of the situation through a mix of social and news media.

“The Internet was recently interrupted in Iraq, which has its effects on communication,” he said.

Yono is adamant that a separation between religious authority and the state are essential at this critical juncture.

“Religious authority dictates who does what in Iraq,” he said. “The great influence of Iran is also very deep.

“This has to be removed. Iraq has great leaders coming out of great people. They can rule among themselves without the influence of outside forces like Iran, Turkey and the U.S.”

He said that though the Chaldean community in Metro Detroit is affected by political turmoil in Iraq, people have their own way of dealing with the news. He doesn’t believe, however, that demonstrations like those outside of the Iraqi consulate in Washington D.C. can do much to change things around at home.

“(Iraqi expats) are pretty much handcuffed,” he said. “Whether you’re an Iraqi in Australia or Egypt, there’s not much you can do besides show solidarity and pray for a positive outcome.”

Indeed, the religious influence in Iraqi government is real and alive. Prime Minister Mahdi himself came out of a compromise between powerful factions polarized around two large Shi’a blocs led by Sadr and Amiri.

Some Iraqi Michiganders, like Iraqi National TV’s Jafar Almosawi, have faith that religious leaders can yet again come up with a practical solution to the crisis within Iraq’s leadership cadre.

“People are now looking to what Ayotallah (Ali) al-Sistani will say during his Jumu’ah sermon,” he said. “We have hope. Everyone is looking forward to what will become of Iraq and these discussions will be positive for our future.”

Almosawi insisted that corruption remains the key hurdle to prosperity in Iraq.

“People needs rights,” he said. “The government comes up with excuses like budgetary shortfalls when asked to fulfill basic needs of its people.

“Iraqis are looking for a more streamlined system that does away with sectarian lines. What we demand is a presidential system that is representative of all. We need advice and wisdom from religious leaders to support our constitution. Leaders like Sistani are good leaders. We need to urge them to support positive democratic reform.”