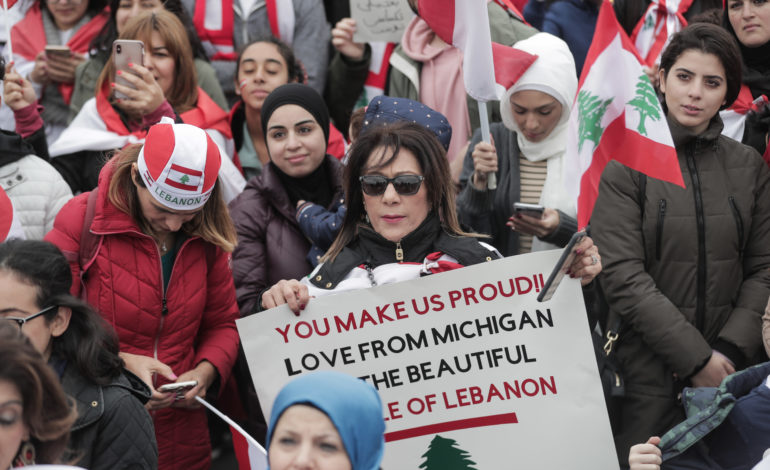 Protestors gather in Dearborn for a demonstration this past Sunday in support of the Lebanese uprising. -Photo by Imad Mohamad/The Arab American News

DEARBORN — Protests in support of the uprising in Lebanon continued this past weekend in Dearborn, with nearly 500 people showing up to rally for reforms and the resignation of government officials in front of the Henry Ford Centennial Library and Dearborn Police on Sunday, October 27.

The protest followed a pair of similar events in the week prior at locations in Ann Arbor and Dearborn, keeping in lock step with demonstrations across the United States and the world, which ultimately helped lead to Lebanese Prime Minister Saad al-Hariri’s resignation on Wednesday.

While Lebanese politics have been ruled by members of the old guard and the political elite over the past three decades, many Lebanese Americans young and old now realize that a change is long overdue.

“It was a peaceful demonstration that represented the young generation of Lebanese people here, their slogan was aiming to improve the government,” said Dr. Aoun Jaber, 67, a Lebanese American who attended the Sunday’s rally.

“They have so many demands, including changing the election laws, so that they’ll have better representation in the parliament.”

Mariam Akanan, 24, who moved here from southern Lebanon three years ago, also attended the demonstration. She came out to show her support for a “revolution” many years in the making.

“I think as someone who is Lebanese, the least I can do from oceans away is to stand in solidarity with my own people and show my support,” she said.

“What’s happening there is an exclamation of years and years of repression by the system; I think the new generation is realizing that there’s no other way for us to change unless we protest and demand solid change and plans.”

Akanan said that the country’s sectarian and religious-based political system, which divides power and key government positions between Sunni Muslims, Shi’a Muslims, Christians and Druze, is one of the biggest hindrances to a smoother and more reliable government for all Lebanese citizens.

“That being said, this cannot just change in one day and one night,” she said. “It’s a long process of systematic change and cultural change in the country.”

She also said she would like to see change in the country’s religion-influenced judicial system, which she said is not fair to women.

Sunday’s demonstration in Dearborn was a successful one according to participant Ali Zeineddine, 35, who was born and raised in Lebanon and hopes to see the country thrive in the coming years.

“It was absolutely successful, we sent a message to help our people in Lebanon,” he said, adding that he hoped to see major changes in the country’s leadership.

“If you have a CEO of the company and they’re not doing good, they replace them,” he said. “For the past 30 years in our government, we have had the same leaders and we still have nothing, we’re going in the hole deeper and deeper.”

Now that Hariri has stepped down, time will tell if Lebanon can move forward in a constructive way that is amicable for its diverse population, which has been hungry for change for decades.

Akanan and many others said they believe that now is the perfect time for the youth to step up and have a bigger say in leading the country into the next decade and beyond.

“I think this is a historic moment for the Lebanese people,” she said. “They have spent days protesting and this shows that this is something new…We’re done with the current people who have been there for more than 30 years. It’s time to let the youth, the new generation take the lead.”