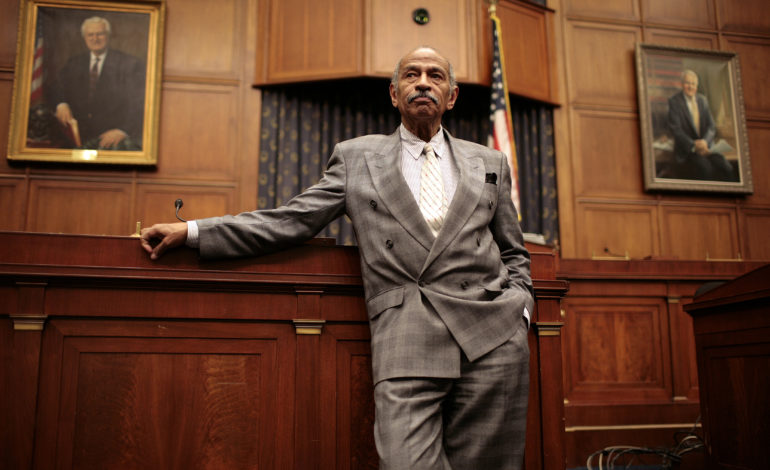 DETROIT —During his five decades in Congress, former U.S. Rep. John Conyers, who died Sunday at age 90, played a major impact in both local and national politics.

In the wake of his passing, those who knew him and/or worked with him spoke out about him and his accomplishments.

“John Conyers lived to serve Detroit, his community and his country, and in doing so helped to build a better world around him,” said Michigan Democratic Party Chairwoman Lavora Barnes. “His commitment to social justice, economic opportunity and the empowerment of his people created immediate change for the better and opened the doors of progress for generations to come.”

A longtime friend of the Arab American community, pioneering civil servant and advocate for social justice, Conyers spent decades advocating on behalf of African Americans and other minorities during his time in Congress.

He could often be seen at events around Dearborn in the local Arab American community, speaking on and with local community members and leaders about the key issues of the day.

“America lost a great patriot and we lost a great friend,” said Nabih Ayad, founder of the Arab American Civil Rights League. “He will be missed. His legacy will live on to inspire generations to come. Our prayers go out to his family.”

In January 2013, Conyers took to the floor of the Michigan House of Representatives to introduce the Rehab and Ahmed Amer Foster Care Improvement Act, a bill named after the Dearborn couple, which was eventually signed by then-Governor Granholm into law.

The act granted enhanced preferences to family members in adoption cases, especially in regards to culture and religion.

Conyers was also a founding member of the Congressional Black Caucus and remained active in the civil rights movement for decades after first being elected in 1964 by a margin of 108 votes.

“John Conyers was a civil rights champion who served Michigan and the people of Detroit for decades,” said U.S. Rep. Debbie Dingell (D-Dearborn). “The fights John Conyers fought will be remembered for generations. I am deeply saddened by his passing. May God bring his family comfort during this difficult time.”

Wayne County Executive Warren Evans said Conyers will especially be remembered for the critical role he played in the modern civil rights movement.

“With heavy hearts we mourn the loss of a civil rights champion who unapologetically stood up for what he believed was right,” Evans said in a statement.

“The fight for equality and civil rights in this country is never ending, and few fought as hard or as successfully as Congressman John Conyers. We owe much of the progress made in the modern civil rights movement to Congressman Conyers. He left an indelible mark on Detroit and this country and his leadership will not be forgotten. Our thoughts and prayers go out to the Conyers family and all who mourn this tremendous loss.”

Just days after Martin Luther King was assassinated in 1968, Conyers introduced legislation to create a holiday honoring the civil rights leader. He pursued the matter for 15 years until President Reagan signed it into law in 1983.

Civil rights legend Rosa Parks, who famously refused to give up her seat to a White passenger on a Montgomery, Alabama bus in 1955, also worked on his Detroit staff for more than two decades before retiring in 1988.

“From being summoned to his Congressional offices in Detroit and Washington at a moment’s notice, to always taking my meeting requests, to conversing with him in the hallways where our children went to school, Congressman John Conyers was a true Detroit icon and consummate civil servant,” she said. “He never hesitated or ignored calls for help, solicitations for advice or pleas for resources over the years. I will always remember him for how he lived, worked, helped and preserved.”

U.S. Rep. Rashida Tlaib (D-Detroit), who succeeded Conyers in Washington, D.C., called him a “fighter” for justice in a statement.

“When I was elected to succeed Congressman Conyers, I knew that I would be following a legacy of a man who fought for the people, fought for his district and never wavered in the fight for jobs, justice and peace,” she said. “Congressman Conyers was a fighter and he now joins the ancestors. May he rest in peace as we continue the fight he fought for so long.”

“Congressman John Conyers was a lifelong Detroiter who was deeply committed to the city and to those he represented,” she said in a statement.

“His impact on our state, whether by spearheading reforms in criminal justice and voting rights in Congress or through his lifetime of civil rights activism, will not be forgotten. I extend my deepest condolences to Congressman Conyers’ family for their loss.”

He took office in 1965 and became both the longest serving African American in Congress and the dean of the U.S. House of Representatives over the course of his five-decade career.

He stepped down in 2017, due to sexual harassment accusations.

In November 2017, the House Ethics Committee said it was investigating allegations of sexual harassment against Conyers, who said his office had resolved a harassment case with a payment but no admission of guilt.

The allegations arose as Congress reviewed how to handle sexual harassment complaints that followed a string of similar accusations against prominent figures in the U.S. media, Hollywood and politics. Conyers stepped down on Dec. 5, 2017, although he said the harassment allegations were “not true.”

Conyers had also been doggedly critical of the U.S. drive to launch the Iraq war, calling in 2005 for Congress to censure President Bush and Vice President Cheney for misleading lawmakers and the American people.

A funeral service for Conyers will take place on Monday at 11 a.m. at Detroit’s Greater Grace Temple, his wife, Monica Conyers, said Tuesday.

Greater Grace is located at 23500 W. Seven Mile in Detroit. Several elected officials past and present are expected to be in attendance, including former President Clinton.