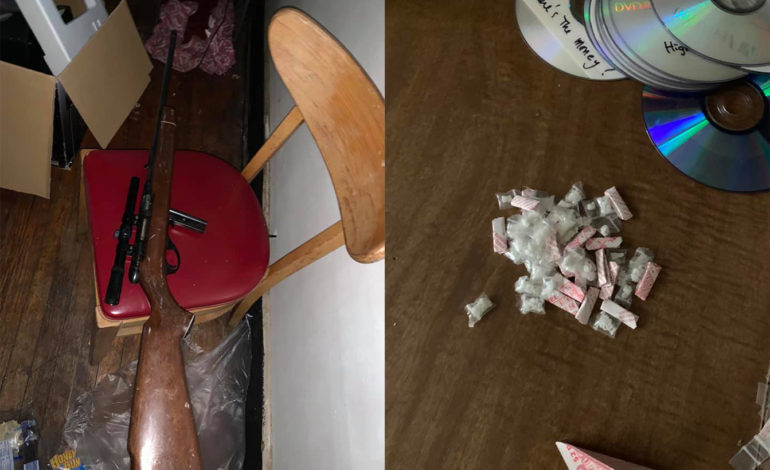 Police confiscated a rifle, drugs and other items from a home after a warrant was executed on Thursday by the Wayne County Sheriff's Department on a drug house whose clientele included young Arab Americans from Dearborn. Photo courtesy: Mike Jaafar/Wayne County Sheriff

DEARBORN – A drug house in Detroit near the city’s border with Dearborn that had a known Arab American clientele was raided on Thursday by the Wayne County Sheriff’s Office.

As drug overdoses prove to be a public health epidemic in the Arab American community, with recent tragedies showing Dearborn and Dearborn Heights to be particularly affected in recent months, the investigation and eventual arrest in the raid is itself connected to a family member’s grief over a young one’s struggle with addiction.

The house is located in the area of Livernois and Tireman Avenue. Items confiscated were:

The sheriff’s department was also able to rescue a puppy.

Wayne County Sheriff Benny Napoleon took to Facebook Thursday afternoon to laud the drug bust as an achievement in the office’s battle against the epidemic.

“Thanks to a concerned mother who was a victim of this nonsense we were able to shut them down,” he said. “Not in my county!” One of the central figures in the investigation was the sheriff’s Office Chief of Operations Mike Jaafar.

“Two weeks ago, I received a tip from a concerned relative of a Dearborn adult male, a younger adult male,” he told The Arab American News. “He had been Ubering over to this area, which we eventually investigated.

The mother soon gathered that this was a drug house and gave the sheriff’s department the information. The sheriff’s narcotic division discovered traffic in and out of the house, which led them to believe there was drug activity.

“Our investigation revealed that this was a drug house,” Jaafar said. “A lot of the clientele were young adults coming in from across the county, specific to Dearborn.”

Though the clientele itself was diverse it included young Arab Americans who resided in Dearborn. A small puppy was also recovered in the raid

A search warrant was executed on Thursday.

Jaafar said an African American woman was arrested for running the drug house. Her name is being kept from the public at this time. This was the only arrest made on Thursday.

She was charged with felony possession with intent to deliver and possession of a firearm.

Jaafar is acutely aware of the implications and connections of Thursday’s successful bust to recent tragedies in his communities. He seemed proud of the work of his department and its continuing efforts to prevent such tragedies.

“The original tip came from a mother that was concerned about a child in the family who had overdosed,” he said. “She was in panic and reached out for help, not knowing who to turn to.

“I calmed her down and reassured her. She gave me the information, which is how the investigation started. We do this on a regular basis. This is one incident that touched the Dearborn area.”