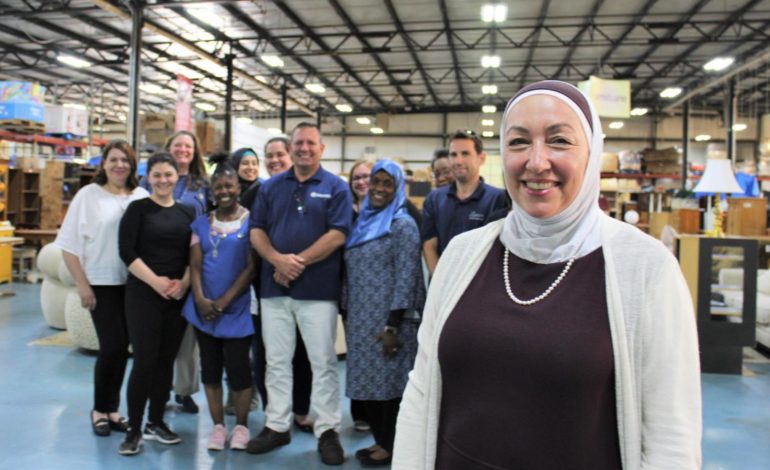 INKSTER ⁠— Najah Bazzy, the CEO and founder of the local nonprofit Zaman International, has been named a 2019 Top 10 CNN Hero.

The announcement was made October 30 on the cable network’s “New Day by Anderson Cooper” show, which showcased the impact Bazzy has brought to hundreds of thousands of women and children living in poverty in the Metro Detroit area.

Bazzy watched the segment live, surrounded by more than 30 staff members and supporters, at the Hope for Humanity Center in Inkster.

The CNN Heroes campaign, which has won both Peabody and Emmy Awards, celebrates individuals who are making extraordinary contributions to help improve the lives of others. Cooper will be joined again this year by Kelly Ripa as co-host of the 13th annual CNN Heroes: An All-Star Tribute awards show, which will celebrate all Top 10 honorees, including Bazzy.

The special will air on Sunday, December 8 at 8 p.m. EST, live from the American Museum of Natural History in New York City.

Those who wish to support Bazzy may vote up to 10 times a day on CNNHeroes.com’s website through Tuesday, December 3 at 11:59 p.m. PST.

“This journey has always been about how we spend our time in the stewardship of others,” Bazzy said, according to a press release. “By raising our profile and funds needed to continue our mission, I truly believe we can break the cycle of poverty and alleviate suffering.”

Bazzy has a background as a nurse and began Zaman in 1996 after providing clinical, spiritual and cultural support to the family of a 3-month-old Iraqi American immigrant. She became shocked by the sparse living conditions the baby was forced to endure, which included a picnic cooler instead of a refrigerator and a laundry basket piled high with towels used as a bed.

She said she was devastated by what she saw and vowed to never let it happen again on her watch, leading to the founding of the charity, which has served more than 2 million people and has undertaken projects in 25 different countries.

Other top 10 nominees include a founder of a shelter for domestic violence victims, a man who provides RVs for people who lost their homes in storms to live in and a woman who created a center for people grieving for the loss of loved ones.

To learn more about Bazzy’s story and Zaman’s programs, visit her CNN Heroes link at //bit.ly/cnnheronajah.

You can also see the full video of nominees below: