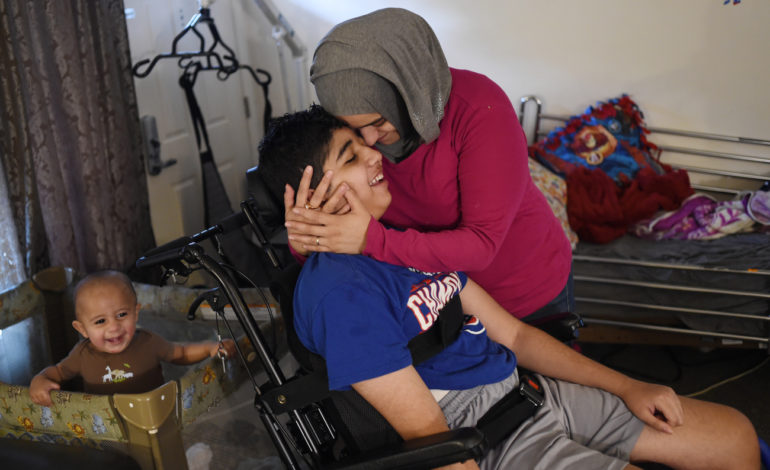 Azeza Kasham embracing her son Hiatham Breadiy as her youngest son Thayer, 1, stands in his playpen on Monday, June 19, 2017. Breadiy, who died last week, suffered from a rare form of epilepsy know as Lafora Progressive Myoclonus Epilepsy, which caused him to have 50-60 micro seizures a day. - Photo courtesy of the Ann Arbor News

ANN ARBOR – Arab American teen Haitham Breadiy, who was diagnosed with Lafora body disease, passed away last week at the age of 17, his family confirmed.

Azeza Kasham, Haitham’s mother, told The Arab American News that her son passed away in his sleep at home.

“He was unresponsive,” Kasham said. “We called an ambulance and they tried to keep his heart beating but couldn’t. The night prior he was fine. He went to physical therapy and even walked a little.” The Ann Arbor teen lived a normal life before his condition suddenly deteriorated in a period of about three months in 2017, as he lost the ability to walk or speak in complete sentences.

In January, Haitham had surgery to implant a vagus nerve stimulation device, which sends mild pulses of electronic energy to the brain to lessen seizure activity.

Haitham’s death is devastating to the family, Kasham said. They had been struggling to face the cost of his treatment and now face his funeral expenses.

As the sole care provider for Haitham and her younger children, Kasham was forced to stop working. Her husband, Elayyan Breadiy, who is recently in remission from Hodkins lymphoma, works full-time as a janitor for the University of Michigan.