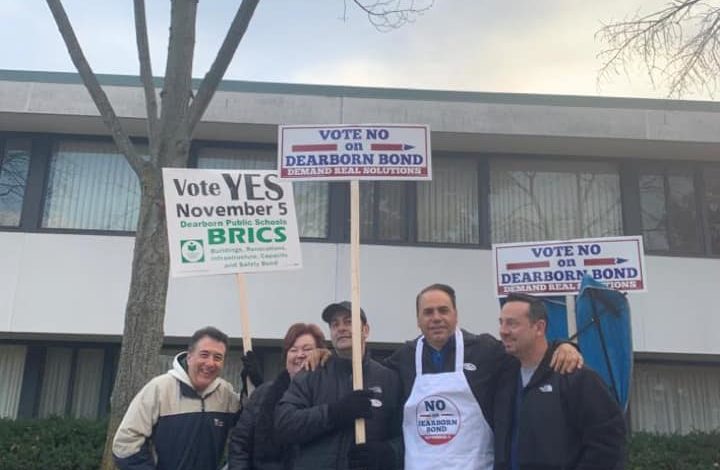 Supporters and opponents of the Dearborn Public Schools BRICS bond manned the polls on a cold Election Day.

DEARBORN — A hotly discussed and debated race to improve the infrastructure of schools in Dearborn failed on Tuesday, leaving the Dearborn Public Schools District’s top educators wondering how to move forward without what they said were much-needed funds and the opposition committee emboldened to find new solutions without the “divisive politics” seen in the past.

The proposal, dubbed BRICS for the area it would target, buildings, renovations, infrastructure, capacity and safety; sought to levy 1.67 mills in 2020, then 3.7 mills annually to repay a $240 million bond over no more than 20 years.

Proponents of the bond proposal said it wouldn’t constitute a net increase in taxes, while many opponents said the district would be better off constructing new buildings as opposed to improving the existing ones.

While opponents of the bill are celebrating, numerous long-time Dearborn educators, including Dearborn Public Schools Board Treasurer and Trustee Mary Lane, who has served the district for two decades, have been left wondering how the system will be able to maintain its current standards. “I’m just very disheartened over it,” Lane said. “Dearborn Public Schools has been transparent throughout this, (but) public schools and public education has been under attack for a very long time.”

Lane said that she believed “the ripple effects will be felt for awhile” and that scheduled improvements, such as new carpeting and new roofs, would have to be put on hold.

She called on those opposing the bond to work on presenting a new plan to Dearborn voters to see what other improvements can be made before the schools end up falling behind. She said that from her research, the lowest-taxed communities are the ones that are the least developed, and she would like to see Dearborn pledge more support for education going forward.

“’We can do better’ was their slogan; I call on them to do better now,” she said. “I am disheartened, but we will go on.”

“We’re going to have to come up with a plan to bring the community back together and look at it,” he said. “A lot of people on the ‘no’ side want to sit at the table and come up with other solutions; the bottom line is we still have aging facilities that need an update and it’s not going to go away.”

Maleyko said the district may have to make some tough decisions, including potentially taking some money out of its operational budget. He thanked those who voted and those who supported the bond as well.

“Obviously we’re disappointed it didn’t pass, but by the same token it’s the reality,” he said. “We’ve got to move forward to make things work for our students; that’s what we’ve always done and that’s what we’ll do.”

Dr. Radwaan Saad, a Dearborn-based dentist, released a statement following the election results on behalf of members of the committee opposing the bond.

“On behalf of Dearborn Parents for Better Schools, we thank all of the Dearborn and Dearborn Heights residents who came out to vote,” he said.

“With voter turnout almost triple of that expected, the voters spoke loud and clear, demanding transparency, accountability and real solutions for our schools both short-term and long-term.”

The statement also said that the goal now is to find solutions outside of the city’s traditional political approach.

The committee commended Maleyko and his team for including them in the discussion and the positive dialogue they shared, and said they hoped to bring ideas together to create a plan that benefits students and teachers alike.

“We demand solutions free of the divisive politics that have plagued our city and schools for too long,” Saad said. “The work will now begin to ensure that the residents, school board and administration work collectively to find progressive and fiscally sound solutions for the challenges facing our schools.

“It is important for the community to understand both sides agree on many issues and working towards a common goal.”