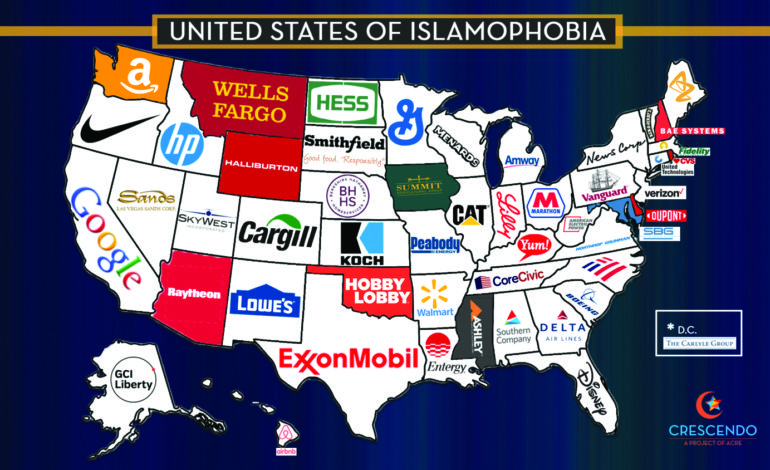 How corporations in every state spread anti-Muslim hate

CHICAGO — The Action Center on Race and the Economy (ACRE), in collaboration with Crescendo and the Public Accountability Initiative, released a report this week that looks at the role that Big Tech platforms, Wall Street firms and right-wing media corporations have played in fanning the flames of White supremacy and anti-Muslim bigotry in the United States and abroad.

The tragedy in Christchurch, New Zealand, in which a White supremacist gunman killed 50 Muslims while simulcasting on Facebook Live has pushed sociologists and other researchers to investigate the relationship between promulgation of hateful ideology over powerful media, tech and finance networks.

Saqib Bhatti, co-executive director of ACRE, said the tragedy sparked his organization to start looking at this broader relationship.

“We started looking at the role corporations are playing in enabling anti-Muslim violence and extremism,” he told The Arab American News. “We originally intended this to be a smaller study, but soon realized there was a lot of substance there. “We realized that anti-Muslim bigotry is on the rise because corporations like Google, Amazon and Fidelity have made an active decision that they’re okay with White supremacy as long as they can make money off of it.”

The report suggests that big tech companies like Facebook, Twitter, Google and Amazon directly profit from racism and violent bigotry by providing a platform to White supremacist groups, attracting other groups to engage with content and use the companies’ algorithm to further spread propaganda.

These companies have state-of-the-art resources to clamp down on activity if they want to. Their cost-benefit analysis is that they would rather make money off this particular type of content. — Saqib Bhatti, co-executive director of ACRE

It argues that Google-owned YouTube plays a key role in exposing young minds to White supremacist ideology through its “autoplay” function that enables quick access to recommended content that can take a user down the rabbit hole of racist ideology.

Facebook lets anti-Muslim groups conduct fundraising efforts on its platforms, while Amazon directly funds hate by donating money to anti-Muslim organization like the Middle East Forum and the investigative Project on Terrorism.

“These companies have state-of-the-art resources to clamp down on activity if they want to,” Bhatti said. “Their cost-benefit analysis is that they would rather make money off this particular type of content.”

While its may appear that hate-groups have found a way to slip through loopholes in tech companies rules and regulation structures and have exploited proprietary algorithms to their own end, Bhatti argues that the situation is quite the opposite.

“Facebook, in fact, has found a way to write its rules which makes these things okay,” he said. “If one looks at their fact checkers for instance, one finds the Daily Caller, one of the biggest purveyors of fake information, particularly with White supremacist and anti-Muslim bias.

“The bigger, overarching point is that these different platforms boast neutrality and try to give off this idea they merely provide a space for people to share their opinions. The truth is that these companies are not neutral. Their rules are crafted in such a way that actually creates these loopholes that are meant to be exploited.”

Recently, a Twitter executive admitted that if it eliminated anti-Muslim content from its website the same way it has successfully eliminated ISIS-related content, it would alienate a lot more users and that any algorithm designed to catch White supremacist content would crowd out too many Republican lawmakers.

Bhatti pointed out that these major social media platforms have the ability to stamp out other troubling content, like child pornography, because they have made an effective effort. The companies fail to go after White supremacist content with the same amount of rigor.

The report recommends that the corporations must make amends for their past actions and invest the profits they have made from propagating bigotry to the communities that have faced violence, discrimination, and harassment as a result of their actions and that they must involve Muslim, Arab, South Asian and Black communities in developing policies that will ensure that these injustices are not repeated in the future.

It calls corporations like Google, Fidelity and News Corp the “unindicted co-conspirators of the Christchurch shooter” and that they should be held accountable for “profiting off a global fascist movement built on bigotry and fear.”