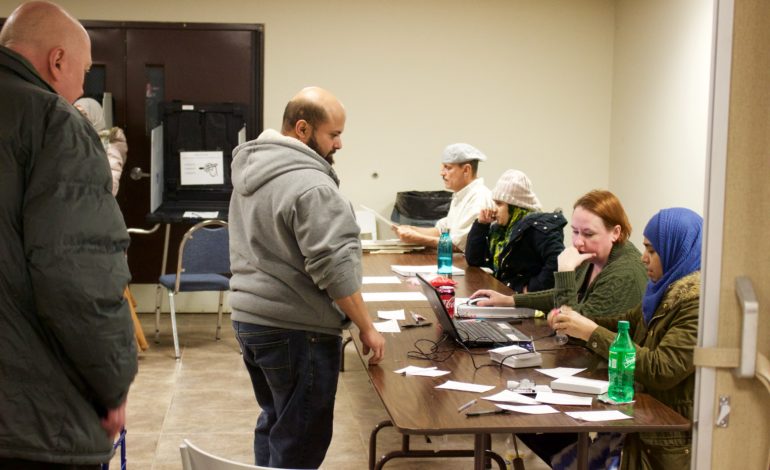 Election officials help voters at a precinct in a senior living facility on Holbrook Road in Hamtramck on Election Night, Tuesday, November 5. In an unpredictable election, three new members join the ranks of the City Council. All photos: Hassan Abbas/The Arab American News

HAMTRAMCK – With City Councilman Saad Almasmari losing his seat in Tuesday’s general election, all three incumbents will now be replaced by three new faces. One, of course, belongs to a well-known Hamtramck politico.

Young, well-spoken and tenacious, Nayeem Leon Choudhury’s second go at a City Council seat proved wildly successful in an otherwise low turn-out on Election Night. Choudhury clocked in at 1,380 votes, with 737 residents voting on Election Day and 643 by absentee vote. His final percentage, 21.31 percent, surpassed other winners Mohammed Hassan and Mohammed M. Alsomiri, who were almost neck and neck.

Controversial Hamtramck politico Hassan, who has previously served on the Council and even ran unsuccessfully against popular mayor Karen Majewski, got 1,209 votes at 18.67 percent. Of those, 638 were absentee votes.

Alsomiri owns one of the biggest commercial properties on Joseph Campau Avenue in Hamtramck. He received 1,133 votes at 17.50 percent, 533 of which were absentee, making him the top Yemeni pick. Not surprising, given Alsomiri’s big win during the August primaries. The Arab American News reached out to Choudhury on Thursday. He sent over a gracious message to his supporters:

“Dear community, thank you all for your genuine support and (for) giving me the opportunity to serve you,” he said. “(Thank you for) your participation, contribution to my campaign and all the hard work, volunteering and sincere support.

“I am honored to receive this support. May Allah the God bless our city, Hamtramck.”

Alsomiri was at Ibrahim Aljahim’s preliminary hearing at the 31st District Court on Thursday. He said he was truly honored to have won on Tuesday and was excited to begin serving his city in January.

Hassan was outside the Hamtramck High School on Tuesday, hours before the 8 p.m. voting deadline. He appeared confident and said he had high hopes for this election. His hopes came to fruition, even with many dismissing his promise to rid the city’s residents of their income taxes, a promise that could very well be hard to keep. After August’s primaries, candidate Carrie Beth Lasley seemed poised to snag a seat on the City Council. Experienced, qualified and determined, she came with both guns blazing, daring other candidates on her social media, assuring transparency and fiscal pragmatism if voters went her way.

She earned 847 votes, 329 of which were absentee, putting her below perhaps the night’s biggest upset, Almasmari, who came in fourth with 1,086 votes. Whispers of voting fraud could be heard in many corners, with the city’s mayor joining the chorus of voices accusing candidates of outright buying blank ballots. Unlikely alliances were made between some candidates in the lead up to Election Night. Alsomiri, Almasmari and Hassan missed a Yemeni American Political Action Committee (YAPAC) candidate forum, though this apparent snub had little effect on Hassan’s election night results. Alsomiri later came to YAPAC with an apology, which the group accepted, just in time for Election Day.

All three top vote getters won big in absentee voting. No evidence of an actual conspiracy to buy votes has yet to surface. A 2017 investigation into voter fraud, in which the Michigan State Police was called in to detain suspects, seems to have yielded no solid conclusions.

Veteran Hamtramck Review journalist Charles “Chip” Sercombe said on Thursday that his instinct on Election Night was that the city would see three new faces. He said he wasn’t too surprised by the results:

“Nayeem was out there campaigning hard and Alsomiri is fairly well known in his community,” he said. “I’m not sure why Alsomiri ran. He seems to have a lot on his plate, with his real estate business. He might be in over his head, but I’m always optimistic.”

On a cold Tuesday, two precincts in a senior living facility on Holbrook Street showed some signs of voting activity in the late evening. Mohammed M. Alsomiri came in third and earned a seat on the Council

Election official Pamela Short, who had administered the two precincts at the facility all day, said she saw steady turn out throughout the day and that the numbers were typical enough for a small election.

She also said that most people in the facility usually voted absentee.

At Hamtramck High School, which houses three precincts, candidate Choudhury’s brother and campaign manager Fazal said he had confidence in his brother’s platform and ability to do the job right.

His hard work and enthusiasm for his brother paid off that night. The new council members will take their seats on January 1.