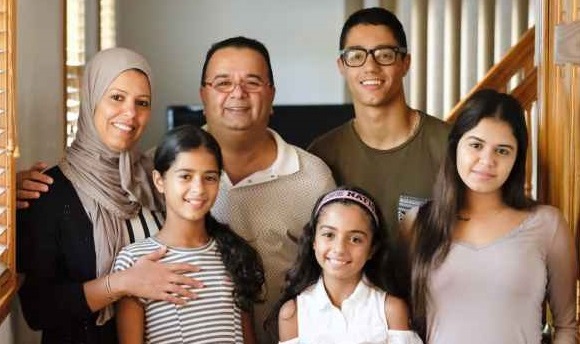 The Alasaad family, including parents Nadia and Ghassan (first two from left). Photo via ACLU Massachusetts

BOSTON — A federal court in Boston ruled in favor of the American Civil Liberties Union (ACLU), Electronic Frontier Foundation (EFF) and the ACLU of Massachusetts on behalf of 11 travelers on Tuesday.

The court ruled that suspicionless searches of travelers’ electronic devices by federal agents at airports and other U.S. ports of entry are unconstitutional.

The ruling came in a lawsuit, Alasaad v. McAleenan, which included an Arab American couple, Ghassan and Nadia Alasaad, as plaintiffs.

“By putting an end to the government’s ability to conduct suspicionless fishing expeditions, the court reaffirms that the border is not a lawless place and that we don’t lose our privacy rights when we travel.”

The Alasaads and their children were returning from a vacation in Quebec in July 2017, where their 11-year-old daughter had become sick. Customs and Border Protection (CBP) officers questioned the father and searched through his unlocked phone, detaining the family for hours.

After five hours, Ms. Alasaad was ordered by an officer to provide the password to her locked phone. The family objected, in part because Ms. Alasaad is a Muslim who wears a headscarf in public and had photos in her phone of herself without it, the ACLU of Massachusetts said.

The Alasaads were forced to wait for a female officer to check through her phone after their original objection. They left about six hours after initially being detained and received their phones about 15 days later.

Mr. Alasaad later attempted to access videos of his daughter’s graduation, but the phone displayed the message, “Sorry, this media doesn’t exist on your internal storage.”

“This is a great day for travelers who now can cross the international border without fear that the government will, in the absence of any suspicion, ransack the extraordinarily sensitive information we all carry in our electronic devices,” said Sophia Cope, EFF senior staff attorney.

The district court order will put an end to Customs and Border Control and Immigrated and Customs Enforcement asserted authority to search and seize travelers’ devices for purposes not in line with the enforcement of immigration and customs laws.

Border officers must now demonstrate individualized suspicion of illegal contraband before they can search a traveler’s device, the EFF said in a blog post.