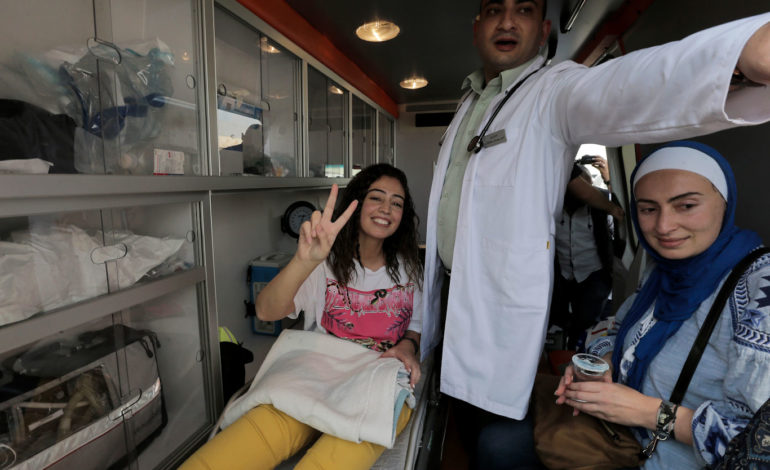 The release on November 6 of two Jordanian nationals, Heba al-Labadi and Abdul Rahman Mi’ri, from Israeli prisons was a bittersweet moment. The pair were finally reunited with their families after harrowing experiences in Israel. Sadly, thousands of Palestinian prisoners are still denied their freedom, still subjected to all sorts of hardships at the hands of their Israeli jailers.

Despite the jubilant return of the two prisoners, celebrated in Jordan, Palestine and throughout the Arab world, several compelling questions remain unanswered: Why were they held in the first place? Why were they released and what can their experience teach Palestinians under Israeli occupation?

Throughout the whole ordeal, Israel failed to produce any evidence to indict Labadi and Mi’ri for any wrongdoing. In fact, it was this lack of evidence that made Israel hold the two Jordanian nationals in administrative detention, without any judicial process whatsoever.

Oddly, days before the release of the two Jordanians, an official Israeli government statement praised the special relationship between Amman and Tel Aviv, describing it as “a cornerstone of stability in the Middle East.”

The reality is that the relationship between the two countries has hit rock bottom in recent years, especially following President Trump’s advent to the White House and the subsequent, systematic dismantling of the “peace process” by Trump and the Israeli government.

Not only did Washington and Tel Aviv demolish the region’s political status quo, one in which Jordan featured as a key player, top U.S. diplomats also tried to barter with King Abdullah II so that Jordan would settle millions of Palestinian refugees in the country in exchange for large sums of money.

On October 21, 2018, Jordan went even further, by rejecting an Israeli offer to renew a 25-year lease on two enclaves in the Jordan Valley, Al-Baqura and Al-Ghamar. The government’s decision was a response to protests by Jordanians and elected parliamentarians, who insist on Jordan’s complete sovereignty over all of its territories.

This particular issue goes back years. Jordan and Israel signed a peace treaty in 1994. An additional annex in the treaty allowed Israel to lease part of the Jordan Valley for 25 years. A quarter of a century later, the Jordan-Israel Peace Treaty failed to achieve any degree of meaningful normalization between both countries, especially as neighboring Palestine remains under Israeli occupation. The stumbling block of that coveted normalization was — and remains — the Jordanian people, who strongly rejected a renewed Israeli lease over Jordanian territories.

Israeli negotiators must have been surprised by Jordan’s refusal to accommodate Israeli interests. With the U.S. removing itself, at least publicly, from the brewing conflict, Israel resorted to its typical bullying by holding two Jordanians hostage, hoping to force the government to reconsider its decision regarding the Jordan Valley.

The Israeli strategy backfired. The arrest of Labadi — who started a hunger strike that lasted for more than 40 days — and Mi’ri, a cancer survivor, was a major PR disaster for Israel. Not only did the tactic fail to deliver any results, it further galvanized the Jordanian people and government regarding the decision to reclaim Al-Baqura and al-Ghamar.

Labadi and Mi’ri were released on November 6. The following day, the Jordanian government informed Israel that its farmers will be banned from entering Al-Baqura area. This way, Jordan retrieved its citizens and its territories within the course of 24 hours.

Three main reasons allowed Jordan to prevail in its confrontation with Israel. First, the steadfastness of the prisoners themselves; second, the unity and mobilization of the Jordanian street, civil society organizations and elected legislators and third, the Jordanian government responding positively to the unified voice of the street.

This compels the question: What is the Palestinian strategy regarding the nearly 5,000 Palestinian prisoners held unlawfully in Israel?

While the prisoners themselves continue to serve as a model of unity and courage, the other factors fundamental to any meaningful strategy aimed at releasing all Palestinian prisoners remain absent.

Although factionalism continues to undermine the Palestinian fight for freedom, prisoners are fighting the same common enemy. The famed “National Conciliation Document”, composed by the unified leadership of Palestinian prisoners in Israeli jails in 2006, is considered the most articulate vision for Palestinian unity and liberation.

For ordinary Palestinians, the prisoners remain an emotive subject, but political disunity is making it nearly impossible for the energies of the Palestinian street to be harnessed in a politically meaningful way. Despite much lip service paid to freeing the prisoners, efforts aimed at achieving this goal are hopelessly splintered and agonizingly factionalized.

As for the Palestinian leadership, the strategy championed by Palestinian Authority leader Mahmoud Abbas is more focused on propping up Abbas’ own image than alleviating the suffering of the prisoners and their families. Brazenly, Abbas exploits the emotional aspect of the prisoners’ tragedy to gain political capital, while punishing the families of Palestinian prisoners in order to pursue his own self-serving political agenda.

“Even if I had only one penny, I would’ve given it to the families of the martyrs, prisoners and heroes,” Abbas said in a theatrical way during his United Nations General Assembly speech last September.

Abbas, of course, has more than one penny. In fact, he has withheld badly needed funds from the families of the “martyrs, prisoners and heroes.” In April 2018, Abbas cut the salaries of government employees in Gaza, along with the money received by the families of Gaza prisoners held inside Israeli jails.

Heba al-Labadi and Abdul Rahman Mi’ri were released because of their own resolve, coupled with strong solidarity exhibited by ordinary Jordanians. These two factors allowed the Jordanian government to publicly challenge Israel, leading to the unconditional release of the two Jordanian prisoners.

Meanwhile, thousands of Palestinian prisoners, including 500 administrative detainees, continue to languish in Israeli prisons. Without united and sustained popular, non-factional mobilization, along with the full backing of the Palestinian leadership, the prisoners are likely to carry on with their fight, alone and unaided.