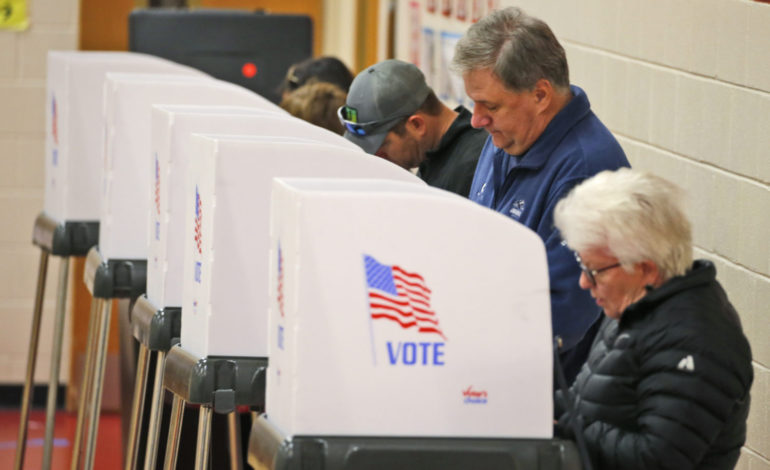 Voters cast their ballots at a polling station in Richmond, Va., Tuesday, Nov. 5.

Many Virginians recently celebrated as both houses of the Virginia legislature came under Democratic Party control. In the past 30 years, the state has shifted from being a conservative Republican state to a liberal Democratic stronghold exemplified by the recent elections. Political analysts attribute this profound change to demographic changes characterized by increased immigration, suburbanization and higher paying jobs – all factors that favor Democrats.

For Arab Americans who consist of both Christians and Muslims, the policies of the Trump administration had a significant impact on their political alignment. The Trump administration’s Muslim travel ban and its strong support of a racist government in Israel solidified their opposition to the Republican Party, which stood behind President Trump’s divisive policies and rhetoric.

In recent years, many Arab Americans ran for public office such as Rashida Tlaib and Ilhan Omar, who won their Democratic party primaries in 2018 and were elected to the House of Representatives. In addition, Ammar Campa and Rush Darwish, both of Palestinian heritage, are also running for Congress. In Virginia, Dr. Ibraheem Samirah, another Arab American, won last year’s special primary election to fill a vacant seat in the House of Delegates. He ran against three other Democrats and won by a landslide. In the November 5 general election, he ran unopposed.

According to a study by the Arab American Institute in 2014, it is estimated that the population of Arab Americans in Virginia to be 169,587 people. This number is certainly higher today and is estimated to be at least 200,000. Although they constitute about 2 percent of the total Virginia population, their concentration in various areas such as Fairfax County and their ability to mobilize during elections have certainly made them a force to be reckoned with.

As we know in Government 101, Americans can influence elections and the overall political process when they are organized into interest groups. One such group is New Dominion PAC (herein, NDPAC) formed in 2001, which evolved in a manner that made it the predominant political voice of the Arab American community in Virginia. In their most recent Candidates Night event, 39 candidates attended to seek the Arab American vote and the support of NDPAC. As a measure of their political success, NDPAC endorsed 19 candidates in the latest election and all 19 were elected into office.

NDPAC has been quite successful in raising funds and dispensing funds to various campaigns. They have also provided additional political resources such as volunteers for phone banking, door knocking and various social media tools to get the Arab American vote out. Moreover, they have an extensive data base of Arab American voters and can target these voters by state and federal electoral districts.

In addition to their success in recent elections, NDPAC was instrumental in defeating a 2016 attempt by certain members of the Virginia legislature who sought to push through an anti-BDS bill. This bill, if passed, would have penalized individuals and businesses for exercising their right to boycott, which is protected under the First Amendment right of Freedom of Speech. Because of the intense lobbying efforts of NDPAC, the bill failed in the committee system. One important condition that NDPAC requires from candidates to receive their endorsement is a specific commitment that they would oppose any anti-BDS legislation. Considering the recent election results, it is now unlikely that any such bill will be introduced in the Virginia legislature.

At the federal level, NDPAC also lobbied against such bills and organized several face to face meetings with elected officials such as Sen. Tim Kaine (D-VA), U.S. Rep. Don Beyer (D-VA) and U.S. Rep. Jennifer Wexton (D-VA), all of whom also committed to oppose anti-BDS legislation despite intense pressure from AIPAC and other pro-Israel lobby groups. Next year will be the presidential elections and NDPAC board members have already positioned themselves in leadership roles in various Democratic presidential primary campaigns.

The political empowerment of Arab Americans in Virginia is truly a success story that can be a model for Arab American communities in other states. When organized into groups such as NDPAC with resources and a focused intelligent strategy, they certainly can become a powerful voice to be heard and respected in the policy-making halls of state and federal government.