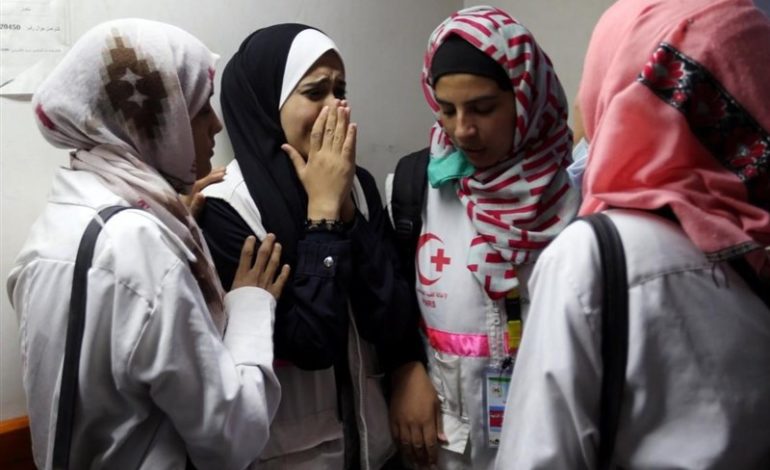 An Israeli attack on Gaza was imminent and not because of any provocations by Palestinian groups in the besieged, impoverished Gaza Strip. The Israeli military escalation was foreseeable because it factors neatly in Israel’s contentious political scene. The war was not a question of “if”, but “when.”

The answer came on November 12, when the Israeli military launched a major strike against Gaza, killing an Islamic Jihad commander, Bahaa Abu al-Ata, along with his wife, Asma.

More strikes followed, targeting what the Israeli military described as Islamic Jihad installations. However, the identities of the victims, along with damning social media footage, pictures and eyewitness accounts, indicate that civilians and civilian infrastructure were bombed and destroyed as well.

As of November 14, when a truce was announced, 32 Palestinians have been killed and over 80 wounded in the Israeli aggression.

What truly frustrates any meaningful discussion on the horrific situation in Gaza is the feeble response, whether by international organizations that exist with the sole purpose of ensuring world peace or by Western mainstream media that ceaselessly celebrates its own accuracy and impartiality.

A most disappointing response to the Israeli violence was offered by Nickolay Mladenov, the United Nations special coordinator for the Middle East Peace Process.

Mladenov, whose job should have long been deemed pointless considering that no “peace process” actually exists, expressed his “concern” about the “ongoing and serious escalation between Palestinian Islamic Jihad and Israel.”

Not only does Mladenov’s statement create a moral equivalence between an occupying power, which instigated the war in the first place, and a small group of a few hundred armed men, it is also dishonest.

“The indiscriminate launching of rockets and mortars against population centers is absolutely unacceptable and must stop immediately,” Mladenov elaborated, putting great emphasis on the fact that, “there can be no justification for any attacks against civilians.”

Shockingly, Mladenov was referring to Israeli, not Palestinian civilians. At the time that his statement was released to the media, there were already dozens of Palestinian civilians that had been killed and wounded, while Israeli media reports spoke of few Israelis who had been treated for “anxiety.”

The European Union did not fare any better. The EU parroted the same American knee-jerk response by condemning “the barrage of rocket attacks reaching deep into Israel.”

“The firing of rockets on civilian populations is totally unacceptable and must immediately stop,” a statement by the European bloc read.

Is it not possible that Mladenov and top EU foreign policymakers do not truly comprehend the political context of the latest Israeli onslaught — that embattled Israeli Prime Minister Benjamin Netanyahu is using military escalation as a way of fortifying his weakening grip on power.

Considering this, what is one to make of the poor media coverage, the inept analyses and the absence of balanced reports in major Western news media?

In a report published by the BBC on November 13, the British broadcaster referred to “cross-border violence between Israel and militants in Gaza.”

But Gaza is not an independent country and, per international law, it is still under Israeli occupation. Israel declared Gaza a “hostile territory” in September 2007, arbitrarily establishing a “border” between it and the besieged Palestinian territory. For some reason, the BBC finds this designation acceptable.

CNN, on the other hand, reported on November 13 that “Israel’s military campaign against Islamic Jihad” is entering its second day, while emphasizing the U.N. condemnation of the rocket attacks.

CNN, like most of its American mainstream counterparts, reports on Israeli military campaigns as a part and parcel of some imagined “war on terror.” Therefore, analyzing the language of U.S. mainstream media with the purpose of underlining and emphasizing its failures and biases, is a useless exercise.

Sadly, U.S. bias regarding Palestine has extended to mainstream media in European countries that were, to some degree, fairer, if not somewhat sympathetic, with the Palestinian peoples’ situation.

El Mundo of Spain, for example, spoke of a number of Palestinians — making sure to emphasize that they were “mostly militants” — who “died” as opposed to “were killed” by the Israeli military.

“The escalation followed the death of Gaza’s armed branch leader,” El Mundo reported, failing once more to pinpoint the culprits in these seemingly mysterious deaths.

La Repubblica, which is perceived in Italy as a “leftist” outlet, sounded more like a rightwing Israeli newspaper, in its description of the events that led to the death and wounding of many Palestinians. The Italian newspaper used a fabricated timeline that only exists in the mind of Israeli military and decision-makers.

“Violence continued. Several rockets were thrown towards Israel by Gaza’s Islamic Jihad (militants), breaking the brief truce, according to (rightwing Israeli newspaper) The Jerusalem Post and to the Israeli army.”

It remains unclear what “truce” La Repubblica was referring to.

France’s Le Monde followed suit, reporting the same deceptive and cliched Israeli lines and emphasizing statements by the Israeli military and government. Interestingly, the death and wounding of many Palestinians in Gaza did not deserve a place on the French newspaper’s homepage. Instead, it chose to highlight a comparatively irrelevant news item where Israel denounced the labeling of illegal settlement products as “discriminatory.”

Maybe one could have excused these across-the-board journalistic and moral failings if it were not for the fact that the Gaza story has been one of the most covered news topics anywhere in the world for over a decade.

It is obvious that the West’s “newspapers of record” have maintained their blind spot on fairly reporting on Gaza and intentionally kept the truth from their readers for many years so as not to offend the sensibilities of the Israeli government and its powerful allies and lobbies.

While one cannot help but bemoan the death of good journalism in the West, it is also important to acknowledge with much appreciation the courage and sacrifices of Gaza’s young journalists and bloggers who, at times, are targeted and killed by the Israeli army for conveying the truth on the plight of the besieged but tenacious Strip.