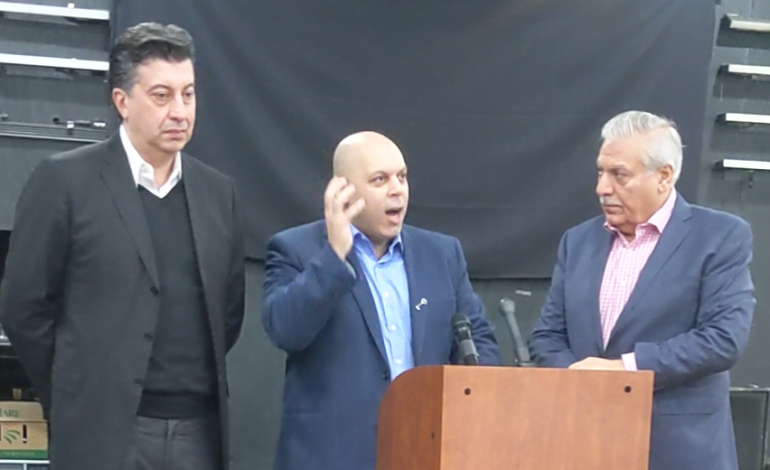 DEARBORN ⁠— Arab American community leaders representing a wide group of civil rights advocates, political and local civic organizations held a press conference on Thursday, November 21 to express their strong disapproval of Governor Whitmer’s trip to Israel this week and her decision to ignore their community concerns prior to booking it.

The trip is Whitmer’s first international trade trip as governor, but her visit comes during a month in which at least 34 Palestinians were killed in Gaza by the Israeli occupying military forces, a statement from the group read. Whitmer left on Sunday and expected to spend seven days in Israel.

“The timing of the governor’s trip could not be worse,” said Amer Zahr, a Palestinian American comedian and University of Detroit Mercy law professor who spoke along with The Arab American News Publisher Osama Siblani and Arab American Civil Rights League Chairman Nasser Beydoun.

Among the victims in Gaza was a family of eight, three adults and five children who were killed while they slept in their home. The Israeli military admitted targeting the building, which happened a few hours before a cease-fire began.

Despite Metro Detroit’s status as the Arab American capital of the United States and the state of Michigan being home to hundreds of thousands of Arab Americans, no community members or leaders were consulted prior to Whitmer’s trip, those at the press conference said.

The group released a statement of concerns they would have shared with Whitmer if they’d had the chance and read from it at the press conference. The conference was supported by organizations including the American-Arab Anti-Discrimination Committee (ADC), the Council on American-Islamic Relations (CAIR-MI), the Arab American Political Action Committee (AAPAC) and the Arab American Civil Rights League, among other local organizations.

“We would have loved to have sat down with the governor and talked to her about our concerns, why this trip is not at the right time and for the right reasons,” Siblani said. “However, we were not given the opportunity to talk to our governor about such an important decision to make a trip at this time to the state of Israel while it is bombing Gaza and two days ago bombed Syria as well.”

Zahr said that the community didn’t find out about Whitmer’s trip until this past Sunday, the day she left for Israel, much like everyone else.

“We are a hard-working, successful and politically active community,” he added. “One of the core concerns and issues for the community is the matter of human rights and self-determination.” He referenced Israel’s ongoing military blockade and occupation of Gaza, which is depriving its residents of food, water, medical supplies and basic freedoms.

“By taking this trip at this time the governor is legitimizing these actions and we must question how and why she has done this and how does this serve our state.”

Siblani and Zahr also questioned Whitmer’s inclusion of Joseph Gasper, the director of the Michigan State Police, considering Israel’s long history of military occupation, war crimes and police profiling, hate, bigotry and oppression against Arabs and Africans inside Israel and the occupied land.

This past summer, U.S. Rep. Rashida Tlaib (D-Detroit) was denied entry into the West Bank by Israel, despite her status as a member of Congress and the country’s (Palestine) status as her homeland, a press release from the community leaders said. Israeli Prime Minister Benjamin Netanyahu also labeled Palestinians as an “existential threat” to Israel last week.

Whitmer’s trip is happening at the invitation of the Israeli government and is hosted by the Jewish Federation of Metropolitan Detroit.

The governor’s spokeswoman Tiffany Brown said Whitmer, “supports all members of our diverse state,” a report from The Detroit News said. “Further, Michigan governors have a rich tradition of traveling to Israel to strengthen our business ties and meet with leaders to discuss how we can partner to attract more businesses and jobs to our state.”

“We feel that her actions are an affront to the Arab American community,” he said. “And what’s particularly disturbing for a civil rights organization is that she would take the head of the Michigan State Police to Israel with her. And we know from various human rights groups what the Israeli policing is all about; it’s about racial profiling; it’s about shooting innocent, unarmed civilians; it’s a lack of due process, so I don’t think there’s anything Michigan can learn from the Israeli police or the (military) that we would want them to come back and use in Michigan.”

He added that community leaders would like Whitmer to see the other side of the story, including what’s happening in the West Bank and Gaza, something most other political leaders rarely do.

Siblani said he spoke with some members of the Commission on Middle Eastern American Affairs in Michigan, but that they were not consulted on the trip, either. They heard about it from the media the same day the governor departed to Israel.

“They were not even aware of this visit,” he said. “…I don’t understand what is the purpose of having a commission if its members are not consulted on issues that deal with the Middle East and the communities they represent in Michigan.”

He also asked Whitmer to take the opportunity to learn from what he called a “major mistake.”

Siblani added that the community supports Whitmer on many issues and hopes for an opportunity for more dialogue in the future.