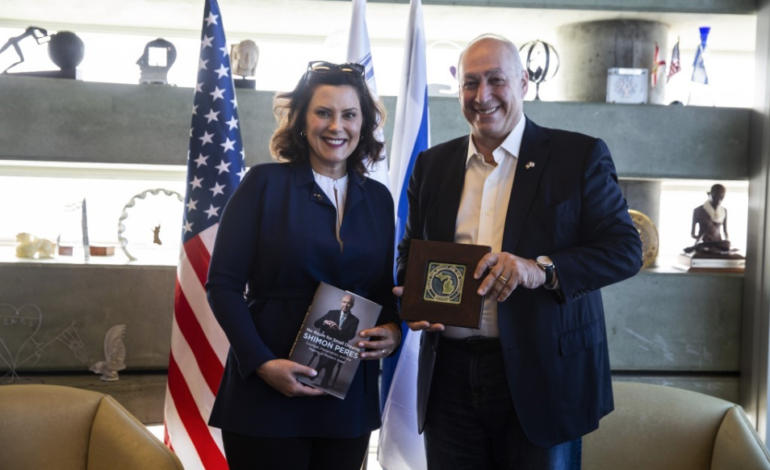 Governor Whitmer with Chemi Peres at the Peres Center for Peace and Innovation. Photo courtesy of Gov. Whitmer's press office

DEARBORN — Governor Whitmer is currently visiting Israel.  We Arab Americans became aware of this trip, like most Michiganders, from media reports this past Sunday, November 17, the same day she departed.  Michigan is home to the largest concentration of Arab Americans in the United States, boasting several hundred thousand residents of Arab descent. We are a hardworking, successful and politically active community. One of the community’s core concerns and issues is the matter of  Palestinian human rights and self-determination.

The timing of the governor’s trip could not be worse. Just this month, the Israeli Occupying Forces killed at least 34 Palestinians in Gaza. Among the victims was a family of eight, three adults and five children, who were murdered while they slept in their home. The five children ranged in age from 13 years to 3 months. In addition to the bombardment, Israel continues to choke off Gaza by imposing a strict blockade that limits access to food, medicine, water and other essentials needed to survive.  By taking this trip at this time, the governor is legitimizing these actions, and we must question how and why she has done this. How does this serve our state?

This past summer, U.S. Rep. Rashida Tlaib (D-Detroit), a Palestinian American, was denied entry into the West Bank by Israel. A member of Michigan’s congressional delegation was refused the right to visit her ancestral homeland because of her political views. Once again we ask, how can the governor of Michigan legitimize these actions? How does this serve our state?

The prime minister of Israel, Benjamin Netanyahu, labeled Palestinians an “existential threat” to Israel last week. He has been rightly described by many presidential candidates as an outright racist. It does not benefit the state of Michigan to lend support and credibility to Israel’s Netanyahu at a time when he is personally under investigation for corruption and his government’s actions fly in the face of international law. How can the governor of Michigan legitimize this racism and bigotry? How does this serve our state?

Also of great concern to the community is the inclusion in this trip of Joseph Gasper, the director of the Michigan State Police. Numerous global human rights organizations have chronicled Israel’s practices of racial profiling, excessive force and collective punishment. Is it the intention of the Michigan State Police to import to our state the Israeli values and practices of hate, bigotry, profiling, violence and oppression?  How does this serve our state?

What is most disturbing about this trip is the governor’s decision to completely ignore the Arab American community. Our perspective, concerns and points of view were never taken into account. No community leaders were consulted for opinions about this trip.  For generations, the Arab American community has been active, productive and visible. We are a diverse community, made up of Muslims and Christians, and our diversity has made Michigan a better state. Finally, Michigan is home to tens of thousands of Arab American refugees and immigrants who have been adversely affected by the actions of the Israeli government. Despite all of this, our perspectives and experiences were completely ignored.

Unfortunately for the community and the state, this is not the first time the governor has paid no attention to our concerns. Last year, during her gubernatorial campaign, Gov. Whitmer expressed her deep support for both the State of Israel and Michigan’s 2016 anti-BDS legislation. This particular legislation prohibits our state from contracting with individuals or companies that support boycotts of Israel. Unquestionably, this law violates the First Amendment of the U.S. Constitution.  The governor of the state of Michigan put the interests of a foreign nation over the constitutional protections afforded to her constituents.  Shortly after she exhibited prioritization of Israel over the rights of Michiganders, Gov. Whitmer met with Arab Americans. During that meeting, Gov. Whitmer assured attendees that when issues surrounding Palestine surface again, the community would be included in the conversation. Sadly, as we see now, this was not the case.

The events of this week lead us to the conclusion that Gov. Whitmer refuses to acknowledge the importance of our community as an essential part of this discussion and us as constituents who deserve equal treatment.  We are left to feel disrespected, discounted and disregarded.

Most importantly, Gov. Whitmer should not use our home state to lend support or provide any credibility to an apartheid state like Israel.

Our opinion matters. Our community matters. Our state and its interests matter. We are proud Michiganders. We shall not sit silent in the face of such actions by Gov. Whitmer or anyone else.