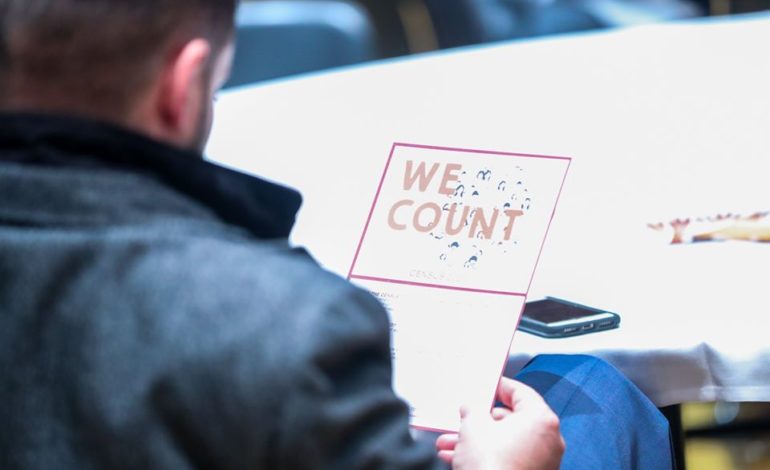 An attendee at a 2020 Census kick-off event in Dearborn reads in informational booklet. The U.S. Census Bureau is ramping up its efforts to reach out to ethnic communities to work towards a complete and accurate count. Photo: Imad Mohamad/The Arab American News

DETROIT — In a Wednesday teleconference, leaders from the U.S. Census Bureau briefed media outlets that serve the Middle Eastern/North African (MENA) communities on the status of the 2020 Census, describing the efforts underway for all people to be accurately counted and the opportunity for individuals to apply for temporary jobs supporting the operation.

The U.S. Constitution mandates that a census of the population be conducted every 10 years. Census Bureau population statistics inform how billions of dollars in federal funds are allocated for critical public services like hospitals and healthcare clinics, emergency response, schools and education, and roads and bridges.

The 2020 Census will also determine how many seats each state gets in Congress and guide the drawing of local political boundaries. In mid-March 2021, households will receive an invitation to participate in the census with an option to respond online, by mail or by phone.

“We are working closely with state and local governments, the business community, civic organizations, nonprofits and the faith community to accomplish our goal of counting everyone, including young children and babies,” said Marilyn A. Sanders, Chicago regional director for the U.S. Census Bureau.

Sanders underscored that census responses are confidential and protected by law.

“We do not share your information with law enforcement agencies or immigration officials,” she said.

Sanders also provided an update on the recruiting for the 2020 Census operation, emphasizing the importance of hiring census workers to work in the communities in which they live.

“We are offering competitive pay, flexible schedules and the opportunity for individuals to make a difference in their own communities for the next 10 years,” she said.

Individuals interested in working on the 2020 Census should visit www.2020census.gov/jobs.

With a team of multicultural audience experts advising on campaign messaging and strategy, VMLY&R is the marketing communications partner for the 2020 Census. VMLY&R Strategy Director Basem Hassan explained his marketing campaign’s research process and insights.

“We are relying heavily on trusted voices in the MENA community to help ensure everyone understands what is at stake in the 2020 Census,” he said.

The Census Bureau officials were joined at the briefing by Nada Al-Hanooti, executive director of the Michigan office of Emgage, and Rima Meroueh, director of advocacy and community engagement at ACCESS, who addressed why the MENA communities should fully participate in the 2020 Census.

Al-Hanooti also encouraged Arab Americans to apply as census takers to help build confidence in the operation among the community.

No inclusion of MENA category on the census form

After the conference, The Arab American News reached out to Hassan to discuss a MENA-related census issue that has come under recent criticisms. The new census form will not include a separate MENA category, despite decades-long calls to change the bureau’s policy.

Hassan said that in his nationwide research of MENA communities, he found this racial categorization to be a criticism and not necessarily a barrier to MENA populations engaging with the census.

The bureau conducted research in 2015 into the inclusion of a separate “Middle Eastern or North African”  category and found including such a tick box would in fact “helps MENA respondents to more accurately report their MENA identities” and that it was optimal to use a dedicated MENA response category.

Despite these findings, the bureau did not take on MENA as a category. Hassan cautioned that this omission should not be construed as an under-representation of MENA in census data.

Race question on the 2020 Census form. Middle Eastern and North African respondents will be asked to pick a race and then include country of origin or ethnicity.

“The instruction for MENA, because we are so diverse, is to select the ethnicity that we most identify with,” he said. “When one writes their country of origin, the bureau has a way of tracking that back to a MENA category.”

“If we as a community come out en masse and be counted, it can only help,” he added. “If we’re not present and counted, it will be harder to demand that we be a tick box on future census forms.”

More information on a complete and accurate count of MENA on the 2020 Census will be released in an FAQ supplement in the coming weeks. For now, the country of origin subcategory under the race tick box is critical towards the MENA count.

The census in Dearborn

The Dearborn community came together at a Census 2020 kick off event at the Ford Community and Performing Arts Center on Wednesday.

Wayne County residents can apply to be census takers or field representatives, both of which are hourly jobs, or salaried regional technicians.

Links for application for these jobs are: