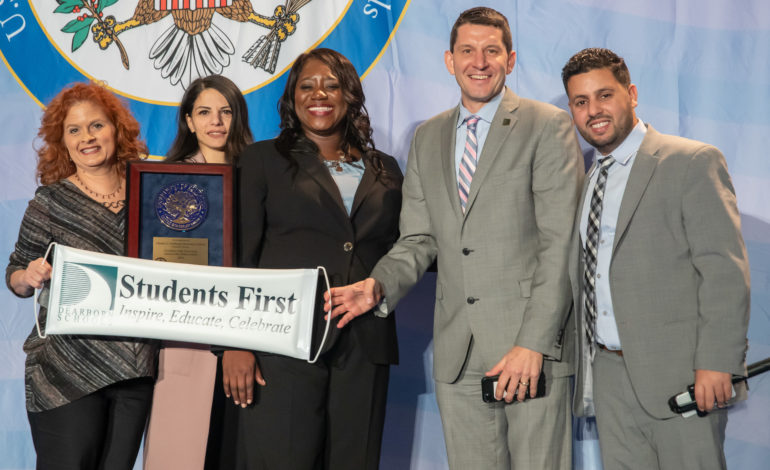 Lindbergh was named an award winner in September and on November 15 received the award from the U.S. Department of Education during a special ceremony. Superintendent Dr. Glenn Maleyko, Lindbergh Principal Zainah Tiba and teacher Jennifer Knaus accepted the award.

Maleyko had already been in Washington for the National Superintendent Gala and Policy Forum earlier in the week. The event was part of his term as the Michigan Superintendent of the Year. Board Trustee Adel Mozip, who was also in town for other reasons, was able to join the group for the Blue Ribbon Award ceremony.

“We are extremely proud of Lindbergh,” Maleyko said. “Only 13 schools in Michigan received a Blue Ribbon Award this year out of more than 3,500 schools. I am also very proud of our district for having three schools named national Blue Ribbon Schools within three years.”

Lindbergh Elementary has 325 students in Young 5s kindergarten through fifth grade. The school opened in 1928, a year after Charles Lindbergh made his historic trans-Atlantic flight on the Spirit of St. Louis.  Last year Lindbergh Elementary was recognized as a Lighthouse School under the international Leader in Me program, which teaches students skills to succeed at school and in life. Fourth and fifth graders can join the National Elementary Honors Society.

Statewide, 46 percent of students were proficient in English language arts and 41 percent in math on the M-STEP. Principal Zainah Tiba was understandably proud of her school’s Blue Ribbon recognition. Every class in the school was able to pose for a picture with the plaque after it came home.

“It has been truly an honor and privilege to be part of such an outstanding group of educators here in D.C.,” Tiba said. “It reinforces how extremely proud we are of our entire community, especially our students.

“None of these accomplishments would be possible if it weren’t for our community,” she added. “Our ability to support, collaborate and work tirelessly for our students is exceptional. Through this our students understand the importance of school and community involvement.”