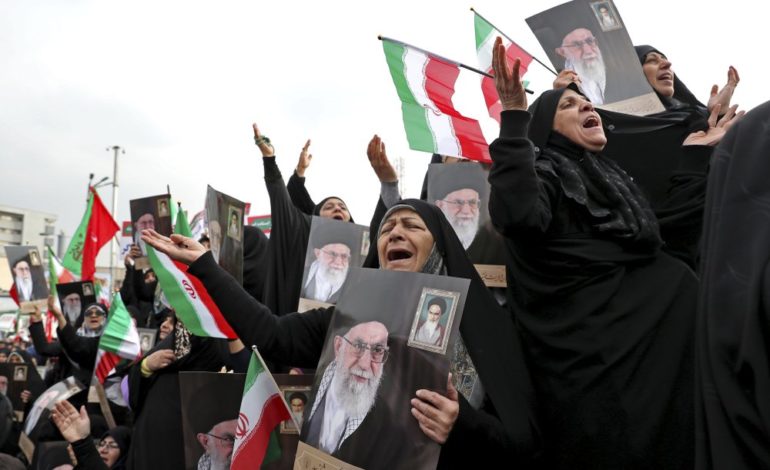 Supporters of Supreme Leader Ayatollah Ali Khamenei at a pro-government rally held on Monday to denounce last week’s violent protests. Iran blames the U.S. and its allies for stoking the unrest and vows to defend its borders. Photo: Ebrahim Noroozi/AP

TEHRAN – After 143 people have reportedly died in protests in Iran over rising fuel prices, which took a particularly violent turn last week, Iran’s Revolutionary Guard is threatening the U.S. and its allies against encroachments into the nation’s affairs.

General Hossein Salami, head of the Revolutionary Guard, told supporters on Monday that last week’s violent protests were a result of meddling by U.S., Britain, Israel and Saudi Arabia. He said the rise in gas prices was a “mere pretext” for an attack on the country.

“I recommend they (foreign countries) look at the marches today, to see who the real people in Iran are and what they are saying,” said Foreign Ministry spokesman Abbas Mousavi, who also spoke at the rally.

Amnesty International, the London-based human rights group which released the death toll, has said that there is clear evidence of the Iran’s authorities and security forces using firearms on unarmed protests. The death toll has climbed since protests began on November 15.

Many filled the pro-government protests on Monday, with Iran’s state television channel covering the event. Authorities cracked down on Internet and social media for days during the protests, making it hard to determine the exact severity of the protests.

The government has not released an official death toll. It also took punitive measures against a London-based TV channel that aired videos of the anti-government protests by freezing the assets of individuals associated with it. The channel is believed to be linked to Saudi Arabia.

The unrests began with U.S. sanctions crippling Iranian oil exports and coincide with mass protests in Iraq and Lebanon against governments with pro-Iranian elements.

The government has denied Amnesty International’s death toll estimates and has said that several people, including members of security forces, have died. It also claims to have arrested as many as 1000 people in connection with the unrest.