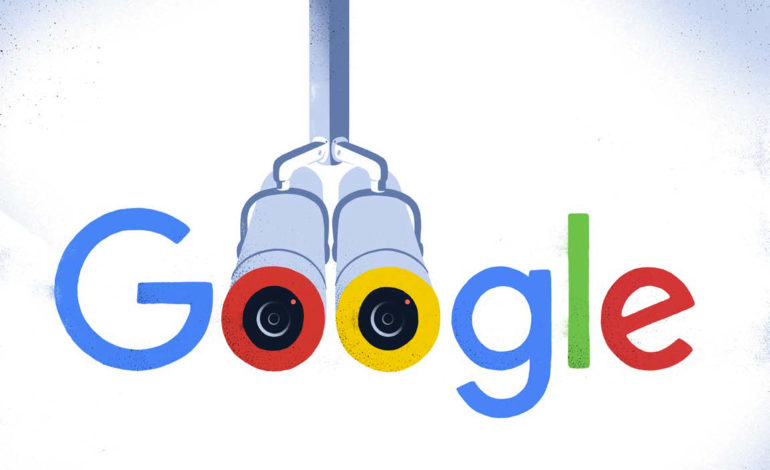 Amnesty International’s new report argues that the tech giants have an unprecedented hold on millions of users' personal and intimate data, which creates a power differential between powerful companies and their users, and increases threats to human rights. All images by Sebastien Thibault

The report, titled “Surveillance Giants: How the business model of Google and Facebook threatens human rights”, lays out the enormous hold on personal information and data enjoyed by the tech companies. Researchers warn that this centralization and subsequent sale of personal data amounts to a direct threat on rights of privacy, freedom of opinion and expression, freedom of thought and the right to equality and non-discrimination.

“Google and Facebook dominate our modern lives – amassing unparalleled power over the digital world by harvesting and monetizing the personal data of billions of people,” said Kumi Naidoo, secretary general of Amnesty International. “Their insidious control of our digital lives undermines the very essence of privacy and is one of the defining human rights challenges of our era.

“To protect our core human values in the digital age – dignity, autonomy, privacy – there needs to be a radical overhaul of the way Big Tech operates, and to move to an Internet that has human rights at its core,” he added.

The report contends that Google and Facebook have established dominance over the primary channels that most of the world, outside of China, relies on to realize their rights online.

The various platforms they own, including Facebook, Instagram, Google Search, YouTube and WhatsApp, facilitate the ways people seek and share information, engage in debate and participate in society. Google’s Android also underpins most of the world’s smartphones. Google and Facebook chipped away at our privacy over time. We are now trapped. Either we must submit to this pervasive surveillance machinery – where our data is easily weaponized to manipulate and influence us – or forego the benefits of the digital world. – Kumi Naidoo, secretary general of Amnesty International

It highlights that though other big tech companies like Amazon and Apple hold a significant share of the personalized information market, Facebook and Google continue to dominate the area and have set up a “new global public square” of ideas and engagement.

The report argues that opting in and utilizing the social media landscape has become a double-edged sword for users of the two platforms. As lives become increasingly intertwined and dependent on Facebook and Google’s technologies, users are forced to pay for these “free” services with their intimate personal data, which is constantly tracked and collected.

“The Internet is vital for people to enjoy many of their rights, yet billions of people have no meaningful choice but to access this public space on terms dictated by Facebook and Google,” Naidoo said.

“To make it worse this isn’t the Internet people signed up for when these platforms started out. Google and Facebook chipped away at our privacy over time. We are now trapped. Either we must submit to this pervasive surveillance machinery – where our data is easily weaponized to manipulate and influence us – or forego the benefits of the digital world. This can never be a legitimate choice. We must reclaim this essential public square, so we can participate without having our rights abused.”

The Cambridge Analytica scandal, in which private information from Facebook users was harvested and then used by Ted Cruz’s presidential campaign, shows that information mined for nefarious purposes is the same data used to generate personalized advertisement experiences by Facebook and Google. The companies’ complex algorithms exist to aid advertisers in strategically marketing users.

Personalization also means the catering of users’ experiences towards their ideological interests. The report finds that Facebook and Google’s algorithms are designed to “nudge people towards particular outcomes based on an individual’s unique personal characteristics.” These algorithms are said to take away personal autonomy through distraction and constant bombardment and manufacture actions and beliefs in such a way that they pose a threat to people’s right to think freely without coercion.

As such, Amnesty International has called for a “new Internet” in which governments take action to overhaul the surveillance-based business model and protect us from corporate human rights abuses by enforcing robust data protection laws and effective regulation of Big Tech in line with human rights law.

Facebook CEO Mark Zuckerberg has continuously insisted, most recently in front of a U.S. Congressional committee, that the data is collected and mined and sold to advertisers to pay towards the company’s operating budget and for its profits. He has stated that collecting users’ personal data is the only way to keep the social media service free.