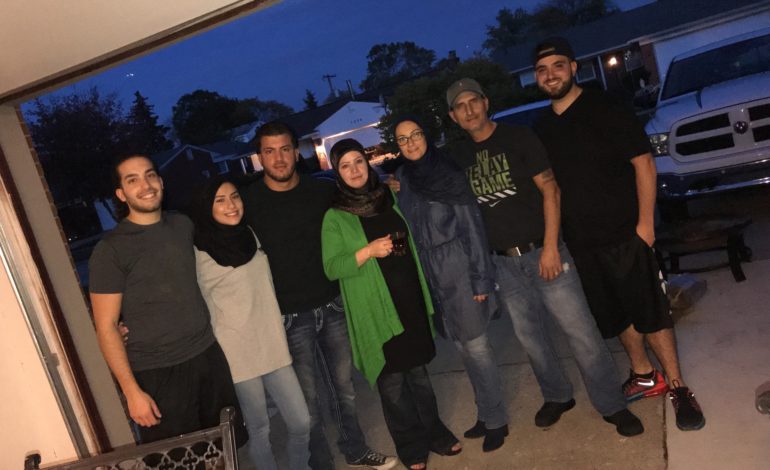 Median El Moustrah (second from right) with family and friends. El Moustrah has been a resident of the U.S. for 30 years. His family, supporters and medical professionals all agree that sending him to Lebanon would spell a death sentence for the husband and father. Photos courtesy of Mariam Charara

DEARBORN HEIGHTS – Immigration and Customs Enforcement (ICE) plans to deport a very ill Dearborn Heights resident to Lebanon, an act which can potentially mean a death sentence for the beloved 49-year-old husband and father of three.

Median El Moustrah has been diagnosed with multiple serious medical conditions, including diabetes, liver disorder, chronic hepatitis B and poor hearing, and requires regular treatment for all of them. Pages over pages of medical opinion from his doctors have advised against traveling in his condition. ICE has ignored these medical opinions and have deemed him fit to fly.

El Moustrah was seeking a liver transplant until ICE ordered him to return to Lebanon despite the country’s current civil unrest and a government shutdown that would make the operation impossible. Once in Lebanon, he will not be able to get the medical attention he needs. Weeks of protests have severely affected medical facilities in Lebanon. El Moustrah’s daughter, Mariam Charara, a social worker in Detroit, is now pleading for her father’s life and safety. She does not want to see a repeat of a needless tragedy, like the one earlier this year involving Jimmy Aldaoud.

Immigration officials accused El Moustrah of marriage fraud in 2012 because he couldn’t remember his wedding anniversary 15 years after he’d been divorced and remarried. His green card was revoked despite a deposition from his ex-wife explaining that their marriage was legitimate and describing the circumstances of their divorce.

El Moustrah has been a resident of the U.S. for 30 years, pays for his own medical insurance and does not have a criminal record. He has strong ties to the community in Metro Detroit. Immigration officials accused him of marriage fraud in 2012 because he couldn’t remember his wedding anniversary 15 years after he’d been divorced and remarried. His green card was revoked despite a deposition from his ex-wife explaining that their marriage was legitimate and describing the circumstances of their divorce. El Moustrah’s lawyer made a last ditch request for a stay with ICE but was informed hours before Thanksgiving that her client’s removal is, “…an ICE civil immigration enforcement priority.”

El Moustrah was detained on November 12, at a scheduled check-in appointment with ICE. He is currently detained at the Calhoun County Jail in Battle Creek. He has always been compliant and cooperative with ICE and willingly provided all information necessary upon its request.

A rally will be held next Monday at El Moustrah’s residence at 8465 Berwyn Street in Dearborn Heights at 10 a.m. U.S. Rep. Rashida Tlaib (D-Detroit) and other community leaders will be in attendance. The community is encouraged to come stand with El Moustrah’s family and show support for one of our own.