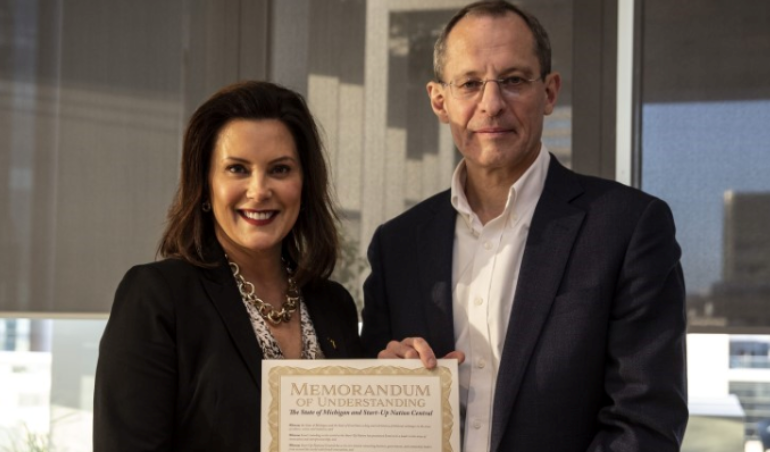 DEARBORN – Prior to Gov. Whitmer’s departure for Israel on Sunday, November 17, the seven-day trip drew sharp criticism from a coalition of Arab American and American Muslim leaders, who questioned her timing given the Trump administration’s recent announcement reversing a longstanding U.S. State Department legal opinion that Israeli settlements in occupied Palestine are illegal according to international law.

The trip also came during a time in which at least 34 Palestinians were killed after the Israeli military admitted it bombed a building just hours before a cease-fire began and killed a family of eight in their home, including five children.

Whitmer said the timing for the trip was “right” considering the Michigan state legislature is taking “hunting and Thanksgiving breaks.”

Arab American leaders also questioned Whitmer’s decision to ignore their input prior to the trip. She did not reach out to Arab American community leaders and did not consult with the Michigan Commission on Middle Eastern Affairs before her visit.

On her trip, the governor signed a memorandum of understanding with the Israel-based tech NGO start up-Nation Central, which will pave the way for the state of Michigan to collaborate on, “technology solutions that have the potential to improve opportunities and quality of life for Michigan citizens.” She also announced a new collaboration between the state of Michigan and the Israeli autonomous vehicle company Mobileye.

The trip was hosted by the Jewish Federation of Metropolitan Detroit in coordination with the Michigan Economic Development Corporation.

The trip had a much deeper significance than business deals according to many local Arab American leaders and activists, including Huwaida Arraf, a Detroit-based attorney and co-founder of the pro-Palestine International Solidarity Movement.

“Governor Whitmer’s trip to Israel should be terribly troubling, not just to the Arab American community, but to every Michigan taxpayer concerned about human rights,” she told The Arab American News.

“Our tax dollars paid for her trip to a country that has long been criticized by the United Nations and various human rights organizations for its serious human rights violations, including potential war crimes and crimes against humanity, against the indigenous Palestinian people and, in the last few years, against African asylum seekers.

“Just this week, Israel deported the Israel/Palestine country director of Human Rights Watch, joining the company of Iran, North Korea and Sudan in banning access to the human rights organization.”

“The business ties that the governor went to pursue contribute to Israel’s ability to continue its abuses with impunity,” she said. “Information about Israel’s abuses is readily available, but the governor chose to ignore it.

“If she claims not to know, there are plenty of constituents who will be happy to educate her so that she does not continue to make Michiganders complicit in Israel’s human rights abuses.”

Rula Aoun, the director of the Arab American Civil Rights League and a 19th District Court magistrate in Dearborn, said she agreed with a statement released by local Arab American leaders last week condemning the timing of the trip and lack of engagement with the local community.

Aoun said that she wished Whitmer would have “incorporated more of a balanced approach to reflect her understanding of a big chunk of her constituency” and added that she hoped the Michigan government, “never steps foot in Israel again for the many human rights violations they engage in.”

“It was kind of surprising to us that she would go so abruptly, not engaging in any form of discussion or organizing any activities to show at all that she cares about this ongoing conflict and what our feeling about it is,” Aoun added.

“It is disappointing from our perspective as a civil rights organization that Governor Whiter has taken her first foreign trip to Israel, especially given the propaganda campaign by the government to usurp the civil liberties of American Muslims, Arab Americans and others who seek to speak out against the illegal Israeli occupation and its atrocities (through the Boycott, Divestment and Sanctions [BDS] movement),” he said.

“It is a really sad state of affairs that our governor would go there under the guise of trying to improve the Michigan economy without speaking to our community and relaying our concerns that we have in terms of the Israeli government and its treatment of Palestinians, as well as their (anti-BDS) campaign to usurp the civil rights of American citizens, including Michiganders.”