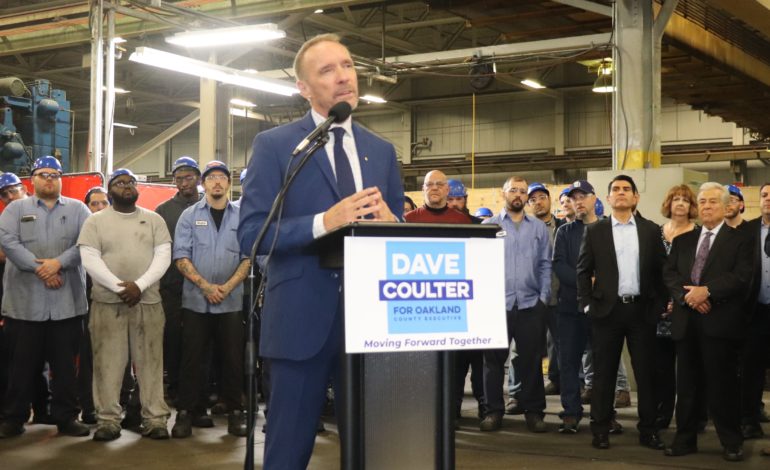 Oakland County – On Thursday, Oakland County Executive David Coulter announced the support of nine of Oakland County’s Democratic commissioners for his 2020 campaign. Coulter said the wide support for his campaign underscores the confidence his colleagues have in his leadership.

“In just three short months, working together, we have already put in place a number of accomplishments for Oakland County residents,” Coulter said. “The broad support of my colleagues on the Board means a great deal to me because it signals they are confident in the work of my administration.”

Coulter has cited several key accomplishments during his short tenure as executive for one of Michigan’s most populated counties. They include a balanced, three-year budget; investing in safe water, health care and local road improvements; raising wages for county employees to a base of $15 an hour; establishing transparent contracting policies and the County’s first comprehensive non-discrimination police; creating a chief diversity, equity and inclusion officer and hiring a complete county census coordinator and a welcoming Oakland coordinator to build on initiatives already started by commissioners.

“Dave Coulter is the best choice for county executive, hands down,” said county board chairman David T. Woodward.  “Dave earned the confidence of my caucus members and me because of his vision, proven track record and determination to make the lives of hard-working families better.  He’s the partner we need to keep moving Oakland County forward.”

The Commissioners endorsing Dave Coulter for county executive include: