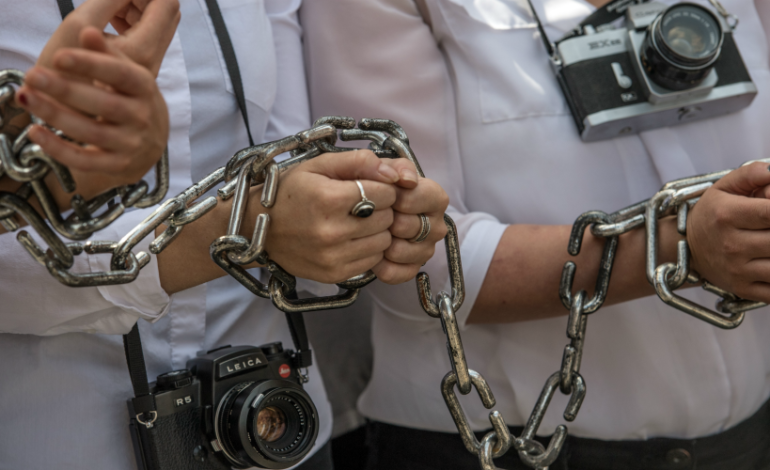 It is hardly surprising to see Middle Eastern countries at the bottom of the World Press Freedom Index, as the worst violators of freedom of the press. But equally alarming is the complete polarization of public opinion as a result of self-serving media and, bankrolled by rich Arab countries, whose only goal is to serve their specific, often sinister, agendas.

One does not need to highlight of how state-controlled media in the Middle East lacks the minimal required degree of partiality, let alone integrity. Only a deluded person would argue that governments that kill, torture and imprison journalists, intellectuals and social media activists have an iota of respect for the freedom of the press and expression — in fact, of any kind of freedom at all.

Of the 180 countries classified by Reporters Without Borders’ annual report on press freedom, seven Middle Eastern countries are listed at the bottom 10 percent category of the world’s worst violators.

In 2018, Israel, which often prides itself on being “the only democracy in the Middle East”, ranked 88th, a hardly shocking realization, considering its constant targeting, killing, wounding and arresting of Palestinian journalists. The Palestinian Authority achieved an even worse rank, at 137th place. It is telling that not a single Middle Eastern country has made it to the top 30 percent rank.

In November, an independent panel of United Nations’ experts resolved that the death in jail of the democratically-elected president of Egypt, Mohammed Morsi, was a “state-sanctioned arbitrary killing.” If this is the fate of an elected president, imagine the fate of ordinary journalists who dare criticize the Egyptian government for its systematic violence, corruption and lack of transparency.

However, we often place all of our focus on this sad state of affairs and neglect the bigger picture, the fact that honest, objective and trust-worthy journalism in the Middle East is suffering a long, agonizing death. This is not only an outcome of government crackdowns on the media, but also of the well-financed propaganda empires that have recruited thousands of journalists in the region and beyond to fight an ugly, seemingly endless turf-war.

Thousands of foreign journalists, with no cultural or political connection to the Middle East, were shipped in, to replace their Arab colleagues, and to participate, willingly or otherwise, in the dirty propaganda campaigns championed by one rich Arab countries or another.

However, it has not always been this way. When the United States invaded Iraq in 2003, a generation of capable and courageous Arab journalists rose from the ashes of that war. While Western journalists allowed themselves to be embedded among U.S. soldiers, thus entering Baghdad and other conquered Iraqi cities on the back of American tanks, Iraqi and Arab journalists were killed, imprisoned and tortured. Navigating the small margins of freedom available in their own countries, journalists in Egypt, Jordan, Saudi Arabia and elsewhere responded to the plight of Iraqis, writing openly against the U.S., Western designs in Iraq and the entire region.

In the following years, a new breed of Arab journalists took their places in the trenches as citizen-journalists. They challenged us all, narrating stories that were never told and writing about issues that state-sanctioned media would never dare touch.

All of this culminated in the brave display of unabashed reporting that first accompanied the revolts and upheaval in the Arab world, known as the “Arab Spring.” Whenever state media failed to report on the bloody crackdowns by government security forces, citizen-journalists stepped in, filling the gap and exposing the atrocities with the hope of holding the culprits to account.

But that brief honeymoon quickly disintegrated, when counter-revolutionary forces managed to regain the initiative. Over the last eight years, Arab governments gradually understood the significance of the press and especially social media in mobilizing the public. The massive crackdown on these journalists has not ceased since. Thousands of journalists were imprisoned and tortured. Many disappeared, leaving no trails to inform their families on whether they are dead or alive.

The ongoing onslaught was quickly joined by another form of media warfare. All state-run media throughout the Arab world were stuffed with loyalists. All opposition-run media were either shut down or faced numerous restrictions that made it nearly impossible for them to play a meaningful role in challenging their countries’ official discourses.

As Gulf Arab countries descended into their own internal conflict, large sums of money were dedicated to expanding their political outreach and influence. Thousands of foreign journalists, with no cultural or political connection to the Middle East, were shipped in, to replace their Arab colleagues, and to participate, willingly or otherwise, in the dirty propaganda campaigns championed by one rich Arab countries or another. The boundaries of that war extended to the rest of the world where newspapers were acquired, websites set and TV news stations established, all with only one goal in mind — countering the propaganda of the enemy and imposing their own.

Sadly, many journalists willingly allowed themselves to participate in this shameful display, betraying the basic standards of good journalism, in fact good moral judgment. Of course, there are those who refused to sell out despite the repercussions of their choice. The thousands of journalists who are currently held in Middle Eastern jails are testimony to the courage and bravery of our colleagues.

But this is not the end of the story. Good journalism must not be allowed to die. We must fight back, in the name of Tareq Ayyoub, who was killed by U.S. forces in Iraq in 2003, and Yaser Murtaja, who was killed by Israeli snipers in Gaza in 2018, and thousands like them, who are either dead or spending tortuous years in Arab or Israeli prisons.

We cannot let fear control us or money compromise our values. Arab regimes have their own agenda — the need to survive at any cost. The Israeli government has its own agenda — silencing any Palestinian call for freedom. Rich Gulf states have their own agendas — defending their political, economic and strategic interests. But who will stand for the agenda of the people, for their freedom, human rights, and ultimate liberation? If it is not us, then who?