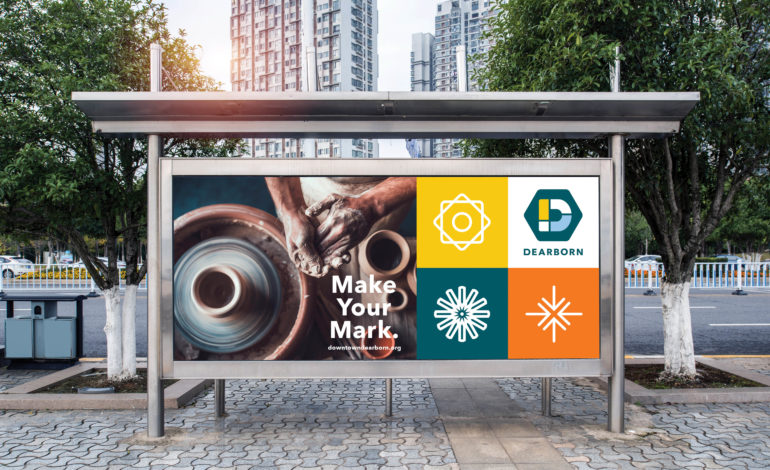 Promotional imagery shows what new billboards could look like on a Dearborn walkway. The new rounded Dearborn logo is part of a marketing project by the city’s Downtown Development Associations and will not replace the city’s seal.

DEARBORN — The city of Dearborn unveiled a new look this week. Reactions from Dearbornites to their city’s new image ranged from utter disappointment, confusion and complete ambivalence to positive reactions to the fledgling and diverse new rebranding project.

Much was made of the city’s introduction of its new, more modern website and social media logo. The rebranding effort, a now two-year project, with a one year development process spearheaded by the East and West Dearborn Downtown Associations, is a culmination of business and branding research that employed community outreach and the input of certain key “stakeholders” from the community.

Though the new look changes the way residents will interface with the city’s physically, with planned streetscape and public space updates to reflect the new brand, the rebranding itself was designed to enhance how the city plans to attract new businesses and residents.

It is now apparent that aesthetics matter for both residents and the DDA. A new informational page, brandingdearborn.com, shows how the city plans to attract economic activity that has a younger, millennial quality, in hopes to compete in the current tech and innovation centered globalized economy, albeit with pushback from some residents towards this modernization.

“If it ain’t broke, don’t fix it,” offered one Facebook commentator as a counter to this rebranding effort.

The Arab American News talked to East and West Dearborn DDA Executive Director Cristina Sheppard-Decius this week about the new brand in hopes of clarifying why and how the rebranding effort came about and what it means for the city’s residents.

“For a number of years, we had been wanting to do a new brand for the districts in the city,” she said. “We started having broader conversations about it with our stakeholders, the city government and the districts themselves.

“Out of our planning session we had back in early 2016, one of the biggest things that we thought would be transformation for was the image of Dearborn. To do that, we are addressing this image on a number of levels, by looking at what message we’re putting out. We needed to make sure that we are succinctly providing a good story and image of what Dearborn is and where we’re going.”

Sheppard-Decius said that part of the image upgrade initiative was to save the city money by looking to partners to invest in the project. The brand is meant to pull “all of the assets” of Dearborn together into one cohesive message that can work across platforms, shaping the way the city can reach out to hire new talent, bring unique businesses and make the city an overall friendly place to live, work and play. Sheppard-Decius calls this the making of a “community-wide brand.”

The logo cannot replace the city’s official seal, which is used in all official city business. That seal itself is not available for non-governmental projects, something the new logo, combined with a font and image library, can be used for.

Residents speak out about community input

We made sure the development process was inclusive and talked to groups and individuals that reflect the city’s cultural diversity. We made sure it included our business partners and corporations. — Cristina Sheppard-Decius, executive director of the East and West Dearborn DDAs.

Facebook comments about the city’s new green, rounded logo showed residents comparing it to trash and recycling companies or brands like BP and others. Some were upset  that the new logo misses the mark on the city’s historic and iconic imagery. Others criticized the city for not hiring local talent in designing the logo and not having input from the residents.

Sheppard-Decius said the new imagery had to be included in all aspects by which the city interacts with the outside business community and potential residents, thus the change in the appearance of the city’s Internet presence, as well as future marketing and recruitment materials. The rebranding focuses on the city’s diversity, history of innovation and interconnectedness.

As for community input, Sheppard-Decius said the DDA looked for insights into its rebranding efforts both from residents and from groups and individuals outside of the city.

“We made sure the development process was inclusive and talked to groups and individuals that reflect the city’s cultural diversity,” she said. “We made sure it included our business partners and corporations.

“We spoke with students from UM-Dearborn and other focus groups along those lines. We made sure to poll a younger demographic to make sure their message was being carried through.”

Sheppard-Decius said the DDA also reached out to different neighborhood associations and especially the Arab American Community to get input. Some 2,000 surveys helped shape the story behind the rebranding, which the designers then took into account.

The DDA included an advisory committee from a cross section of investors and residents and weekly public meetings about the rebranding.

Several designs were workshopped and brought to the East and West DDA boards in public meetings. A “Brand Style Guide” on the rebranding website explains the design process in depth:

“The Dearborn logo consists of the mark and logotype. Varied shapes representing rich mosaics, vibrant neighborhoods, lively downtowns and diversity come together to create a united and connected logo mark. The hexagon shape is inspired by both the beehive, symbolizing community, and nuts and bolts supporting the theme of hands-on innovation. Rounded corners convey friendliness and approachability, much like the personality of Dearborn.” The logo for Dearborn’s new brand

Two companies, Octane and Applied Storytelling, were contracted to work with the DDA and the city of Dearborn on the branding. Octane is headquartered in Detroit, with its lead being a former Dearborn resident, while Applied has an office in Dearborn with its project leads working and living in the city as well.

Both companies have worked with the Henry Ford Museum complex on project in the past.

The rebranding project, a form of promotional operation that many cities and their development districts undertake, largely used what’s called tax capture: Revenue collected from increasing property tax values in those districts and put towards projects to attract economic activity, including promotions.

As such, a board was set up by the DDA, which included Dearborn’s mayor and representatives from the county, to oversee the project and approve its various aspects.

Dearborn City Councilman Michael Sareini told The Arab American News this week that the residents should know the board did not include a representative from the City Council, nor does the City Council have authority over such a board’s decision. The DDA is a separate entity from the Council, in charge of promoting development and economic growth in different business districts of the city.

“These districts are created under state law and have to specify how many representatives sit on their boards from the city and the county,” he said.

In Dearborn’s case, the board did not include any representatives from the City Council. Furthermore, the City Council does not have authority over such a tax-captured, DDA-led and board certified project’s operations, Sareini clarified, for those residents concerned about whether the project and its many elements were put through the Council for vote.

Sareini said that these are normal projects DDAs take on in every community; and that though he would have liked to see the money go to more infrastructural and beautification efforts in the districts, creating a brand for the city was the board’s decision.

The project has an overall projected cost of $480,000. A little less than half of this projected budget has been spent already. $100,000 out of the projected cost was given to DDA by Ford Land, a commercial and real estate subsidiary of Ford Motor Company, with the city of Dearborn itself approving $50,000 for the project. The rest is tax capture revenue used by East and West Dearborn DDA for the project.