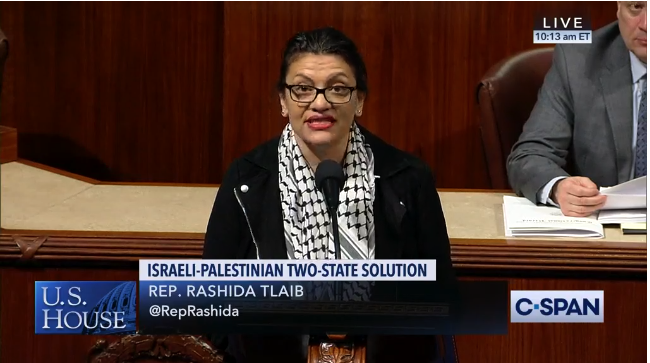 U.S. Rep. Rashida Tlaib (D-Detroit) speaks on the House floor against a resolution calling for a two-state solution. The resolution failed to acknowledge Israel's occupation of Palestine and its routine violations of the basic rights of Palestinians.

WASHINGTON, D.C — Congress approved a resolution supporting a two-state solution for the Israeli-Palestinian conflict last Friday, December 6. The vote was 226-188.

The resolution, “H.Res.326 — Expressing the sense of the House of Representatives regarding United States efforts to resolve the Israeli-Palestinian conflict through a negotiated two-state solution”, expresses the belief that only a two-state solution to the Israeli-Palestinian conflict can ensure Israel’s survival as a secure Jewish and democratic state and fulfill the legitimate aspirations for a Palestinian state.

It also expresses the sense that any U.S. proposal to achieve a just, stable and lasting solution to the conflict should endorse a two-state solution and discourage steps that would put a peaceful resolution further out of reach.

The resolution language states that the “United States has worked for decades to strengthen Israel’s security through assistance and cooperation on defense and intelligence matters” in order to enhance the safety of United States and Israeli citizens.

It references a 2016 10-year Memorandum of Understanding under the Obama administration, reaffirming U.S. commitment to annual military assistance and cooperative missile defense programs with Israel, which it considers to be in the national interests of both countries. U.S. Rep. Debbie Dingell (D- Dearborn) speaks on the floor of the U.S. House reiterating her commitment to a just two-state solution to the Israeli-Palestinian conflict – A video grab

Although terminology recognizing occupation and violence against Palestinians at the hands of Israeli forces did not appear in the resolution, it did recognize a 20 year bipartisan opposition to settlement expansion, moves toward unilateral annexation of territory and efforts to achieve Palestinian statehood status outside the framework of negotiations with Israel.

Out of those who opposed the resolution, U.S. Rep. Rashida Tlaib (D-Detroit) honored her grandmother in stating that the resolution legitimized inequality, ethnic discrimination and inhumane conditions for Palestinians in the region.

“Prime Minister Netanyahu and the Likud Party have actively fought against a two-state solution and took steps to ensure its demise,” she said. “They increased their illegal taking of Palestinian homes and imprisoned more Palestinian children than ever before.”

She pointed out that Israeli laws acknowledge that only Jews have the right to self-determination and have effectively made Palestinians second-class citizens.

“Separate but equal didn’t work in our country and I can’t see that it is possible in other countries,” she added. “Given our nation’s history of segregation, we should recognize when such injustices are occurring. We cannot be honest brokers for peace if we refuse to use the words illegal occupation by Israel.”

U.S. Rep. Debbie Dingell (D-Dearborn) rose in support of the resolution. She recently came under criticism for taking her name out of a resolution that condemned the Israeli legal system’s capture, imprisonment and torture of Palestinian children.

“It is critical that we take serious steps to reiterate the United States’ commitment towards a just two-state solution to the conflict that allows both Israelis and Palestinians to live in peace side by side,” she said. “Settlement activity in the West Bank has increasingly threatened the viability of a future Palestinian state in the region and there is now open talk of Israeli annexation of the Jordan Valley.

“Settlements erode any possibility of a continuous, viable Palestinian state.”

Dingell also criticized the Trump administration’s policies in support of Israeli aggression against Palestinians, recognizing its steps as a roadblock toward enacting peace in the region.

“The Trump administration’s policies have discredited valid Palestinian claims to also have their capital in Jerusalem,” she said. “We also cannot forget the humanitarian situation in Gaza, which is untenable.”

U.S. Rep. Andy Levin (D-Bloomfield Hills) gave strong support to the resolution and said that without a two-state solution Israel’s future as a secure democratic homeland for the Jewish people would be in jeopardy.

“My colleagues have spoken a lot about the need to safeguard Israel’s security and that is also why I am here today,” he said. “We are at a moment when the prospects for a peaceful two-state solution— something that has long had overwhelming bipartisan support in this country and from presidents from both parties— could be fading.

“If we let them fade, prospects for lasting security in Israel will fade as well.”