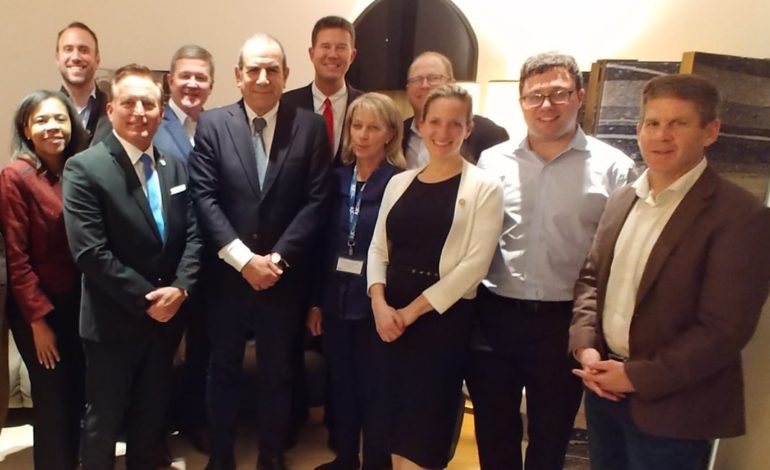 Benson (third from right) in this photo from Twitter posted by Iowa Secretary of State Paul Pate.

LANSING — A little less than a month after Gov. Whitmer visited Israel to attend events and conduct business with technology based companies, Michigan.gov announced that Secretary of State Jocelyn Benson was also visiting as part of a bipartisan delegation from the National Association of Secretaries of State this Monday.

Her trip was sponsored by Project Interchange, an institute of the global Jewish advocacy group American Jewish Committees, and included 10 other secretaries of state. The stated purpose of the trip was to examine cybersecurity policies and practices to better protect election administration, business services and other areas.

Benson’s delegation planned to visit Tel Aviv, Haifa, Israel’s northern and southern borders and Jerusalem, and also planned to meet with Palestinian civic and business leaders in Ramallah in the Palestinian Authority.

Benson’s visit comes at a time where local Arab Americans have grown increasingly frustrated with ongoing American military and financial support for Israel, especially considering its military admitted it accidentally bombed a building in Palestine last month just hours before a ceasefire, killing a family of eight in their home, including five children.

In all, at least 34 Palestinians were killed during the period prior to Whitmer’s visit.

Huwaida Arraf, a Detroit-based attorney and co-founder of the pro-Palestine International Solidarity Movement, said she was not surprised by Benson’s visit although she was highly disappointed.

“I’m not necessarily ‘surprised’, as I know that Israel expends considerable energy and resources to promote itself as a leader in various sectors, largely as a way to detract from its continued occupation and oppression of the Palestinian people,” she said in an email to The Arab American News.

“This effort involves working with organizations and individuals across the U.S. (and the world) to draw politicians, officials and other influencers to Israel. So, I know that Israel has agents working hard on this.

“However, I’m disappointed and extremely upset that our elected representatives are using my tax dollars to visit and collaborate with a state responsible for grotesque human rights abuses, modern day apartheid and ongoing settler-colonialism.”

Israel spent $19.7 billion on military and security in 2017, a $2 billion increase from the previous year, and has been positioning itself as a leader in cybersecurity, especially as the highly-charged 2020 U.S. election draws near.

But critics say these expenditures are being used to enforce the occupation of Palestinian lands that has been deemed internationally illegal, a distinction that the Trump administration removed last month in a historic and controversial shift of United States policy.

“It’s particularly disturbing that U.S. officials turn to Israel to collaborate on security issues considering that country’s poor human rights record and the fact that Israel gets its ‘expertise’ largely from experimenting on Palestinians, whose human and civil rights Israel does not protect or respect, ”Arraf added.

On Thursday, December 19, Benson retweeted a message from Iowa Secretary of State Paul Pate, calling Israel “a leader in #CyberSecurity.”

Israel’s cybersecurity track record is also a cause for concern, Siblani said, noting an October lawsuit against Israel’s NSO group by Facebook, Inc. alleging the cybersecurity company’s spyware infected the phones of users after being delivered through the WhatsApp messaging platform, an encrypted service that is widely used because of its privacy advantages and by people of Middle Eastern descent. The Israeli company allegedly targeted the mobile phones of more than 1,400 users in 20 countries, including more than 100 human rights activists, lawyers, journalists and academics over a two-week period. Facebook is the parent company of WhatsApp.

“Israel interferes the most in our elections than any other nation in the world,” Beydoun told The Arab American News, adding that he did not feel it was right for Benson to visit because of Israel’s continued denial of voting rights to Palestinians in the occupied territories.

This year, Prime Minister Benjamin Netanyahu’s Facebook page was also sanctioned by the company after a chatbot linked to his account sent a message that “Arabs want to annihilate us all – women, children and men.”

According to the Adalah Legal Center, a non-profit, non-sectarian Palestinian-run legal center in Israel which maintains a discriminatory laws database, more than 65 Israeli laws discriminate directly or indirectly against Palestinian citizens in Israel.

“What we have seen as a result of U.S. law enforcement training with Israeli police and military is the militarization of our police forces, increased racial profiling and violent repression of nonviolent protests. Earlier this year, Amnesty International joined a lawsuit against an Israeli cybersecurity company whose product is being sold to and used by repressive regimes to target activists, journalists and human rights defenders. It’s outrageous.”

As of press time, no update had been given by Benson’s office about the results of the trip, which was scheduled to conclude December 20, but Arraf said she believes the business relationship is unnecessary for several reasons.

“Neither Michigan nor any other state needs to turn to Israel for this kind of expertise,” she said. “I am confident that Michiganders do not want their officials bringing home mass surveillance and militarized policing. This is not the ‘expertise’ that Michiganders want or need.”

Zahr also criticized Israel for its continued practice of apartheid and discriminatory voting system, as well as Benson and the other secretaries of state who participated in the trip, which was funded by the American Jewish Committee. He criticized the committee for supporting Israeli bombing campaigns against the beleaguered Gaza Strip.

He added that he believes Benson’s visit to Ramallah was “simply an attempt to whitewash a visit to a nation that doesn’t practice equal voting rights”, calling the visit “disturbing” for a leader in charge of Michigan’s elections.

“It’s very disturbing that any secretary of state would go to a nation that formally practices apartheid in a nation of 5 million people that don’t have the right to vote for a nation that occupies them,” Zahr said, adding that Israel surveils Arab voters at the polls and discourages them from voting through intimidation.

“Israel is a nation that doesn’t practice democratic, equal rights or voting rights. There’s nothing she can learn about equal voting rights or practices from Israel.”