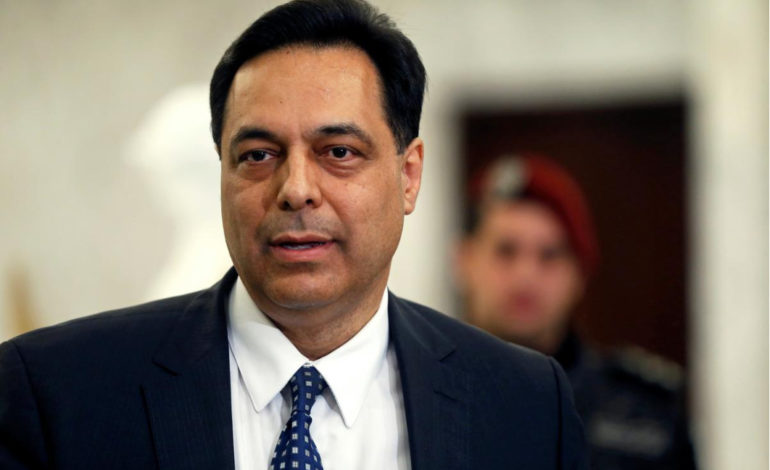 Hassan Diab talks to the media after being named Lebanon’s new prime minister, at the presidential palace in Baabda, Lebanon, December 19. - Photo by Reuters

BEIRUT — Lebanon’s newly named prime minister said on Thursday he would quickly form a government to pull the country out of economic crisis after he was designated with backing from the Hezbollah group, Amal Movement, Free Patriotic Movement and their allies.

Hassan Diab, a little-known academic and former education minister who surfaced as a candidate overnight, said he would address the grievances of protesters who have been demonstrating for two months and urgently enact a reform plan.

The designation set the stage for a cabinet that excludes allies of the United States and Gulf Arab countries while underlining the influence of Iran’s friends in Lebanon. The move would complicate efforts to secure Western financial aid, analysts say.

Lebanon, facing its worst economic crisis since the 1975-90 civil war, has been seeking a new government since Prime Minister Saad al-Hariri resigned on Oct. 29, prompted by the protests against the ruling elite.

Efforts to reach a deal on a new premier have been hampered by divisions that reflect tensions between Hariri, who is aligned with Western and Gulf Arab states, and other major parties, including the largest Christian bloc represented by the Free Patriotic Movement led by Gebran Bassil, son in-law of President Michel Aoun, Hezbollah, Amal Movement and their allies in the parliament. Washington regards Hezbollah as a “terrorist group” and has imposed sanctions on it.

“I will work hard to form a government as soon as possible,” Diab said in a speech. “All our efforts must focus on stopping the collapse and restoring confidence.”

He said the crisis required all sides to stand together and that the priority in government would be for specialists.

Diab also sought to reassure protesters angry at an elite they accuse of steering Lebanon towards crisis, saying, “I have heard your voices, which are expressing long-standing pain and anger at the state we have reached.”

President Aoun held consultations with deputies on Thursday on designating the new premier, who under the country’s sectarian political system must be a Sunni Muslim.

Aoun, a Maronite Christian, is required to designate the candidate with the most support.

The move to nominate Diab signaled a decision by Hezbollah and its allies to abandon efforts to forge a consensus with Hariri and pick a candidate of their choosing.

But it was not immediately clear how quickly a government would be formed. For now, Hariri, Lebanon’s leading Sunni politician, will stay on as caretaker prime minister.

Lebanon’s crisis has been growing, with banks imposing tight capital controls, the pound slumping by a third from its official rate and companies shedding jobs and cutting salaries.

Last week Fitch cut Lebanon’s credit rating for the third time in a year, warning it now expected the country to restructure or default on its debt.

“A government with a Hezbollah-backed prime minister would be even less likely to secure support from the Gulf countries… and might also potentially reduce the chances of Lebanon getting support from the IMF if the U.S. raises concerns,” said Jason Tuvey, senior emerging markets economist at Capital Economics.

A senior banker expressed concern Hezbollah is too preoccupied with its struggle with the United States and said the “real battle” was against “liquidity meltdown.”

Members of parliament with Hariri’s Future Movement told Aoun it would not take part in the next government, a source close to Hariri said.

Hariri had seemed on course to be nominated prime minister, but withdrew his candidacy on Wednesday.