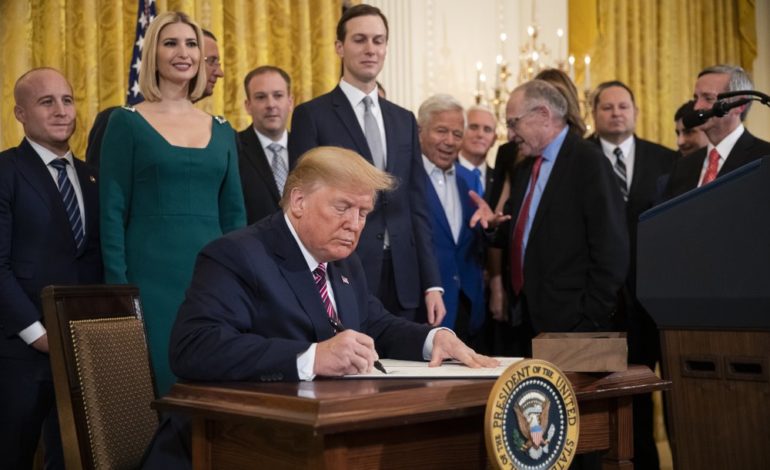 President Trump signs an executive order to eliminate criticism of Israel on college campuses at a Hanukkah reception at the White House. Photo: Manuel Balce Ceneta/AP

WASHINGTON, D.C – In an extraordinary move that flies in the face of civil rights protections, President Trump signed an executive order on Wednesday to interpret Judaism as a nationality. The order expands Title VI of the Civil Rights Act of 1964 protections against discrimination to prosecute cases of perceived anti-Semitism on college campuses.

The move, which was pushed for by Trump’s son-in-law Jared Kushner, was explored over the past year by Trump’s domestic policy aids. Once acts of discrimination are noted to occur on a college campus with the education institution failing to combat them, the federal government can withhold funding from it.

The executive order is yet another step towards eliminating legitimate critiques of Israeli occupation of Palestine and its long recognized violations of international human rights laws by outlawing divestment efforts on college campuses.

The Boycott, Divest and Sanction (BDS) movement has gained traction in academic settings in recent years, with blatant pushback from conservatives and occupation supporters under the guise of protection against anti-Semitism. Threats of losing funding from the federal government and other sources has caused university’s to purge or punish well respected scholars and faculty.

The order will effectively interpret Judaism as a race or nationality, not just a religion, according to the New York Times, which first reported on the order.

The executive order is not legislation and can be overturned by the next president. It does, however, strategically bring about failed congressional acts that similarly stifled free speech and criticism against the internationally recognized human rights violations committed by the Israeli apartheid state. An Anti-Semitism Awareness Act of 2016 passed the Senate, but failed in the House that year.

By developing and executing the order, the White House is aligning itself with the U.S. State Department in its definition of what constitutes anti-Semitism. The U.S. is a member of International Holocaust Remembrance Alliance (IHRA), whose non-binding “working definition” includes such manifestations of the anti-Semitism that may include “the targeting of the state of Israel, conceived as a Jewish collectivity” or “denying the Jewish people their right to self-determination, e.g., by claiming that the existence of a State of Israel is a racist endeavor.”

Ironically, Trump made comments that invoked derogatory stereotypes of strong associations with finance and wealth in the Jewish community at the Israeli American Council National Summit earlier this week.

Prominent Democrats have joined Republicans in supporting legislation to manipulate civil rights law on the books to further eliminate, by fear of reprisal, any criticism or Israeli policies through the legitimate act of boycott.

Recently, a resolution passed on the House floor, to much objection, that expressed a strategy and path towards peace by recognizing that “that only a two-state solution to the Israeli-Palestinian conflict can ensure Israel’s survival as a secure Jewish and democratic state and fulfill the legitimate aspirations for a Palestinian state.” No mention was made of the Israeli occupation and violence against Palestinians as a possible blockade to peace in the region.

DACA beneficiaries could stay in the U.S. for years