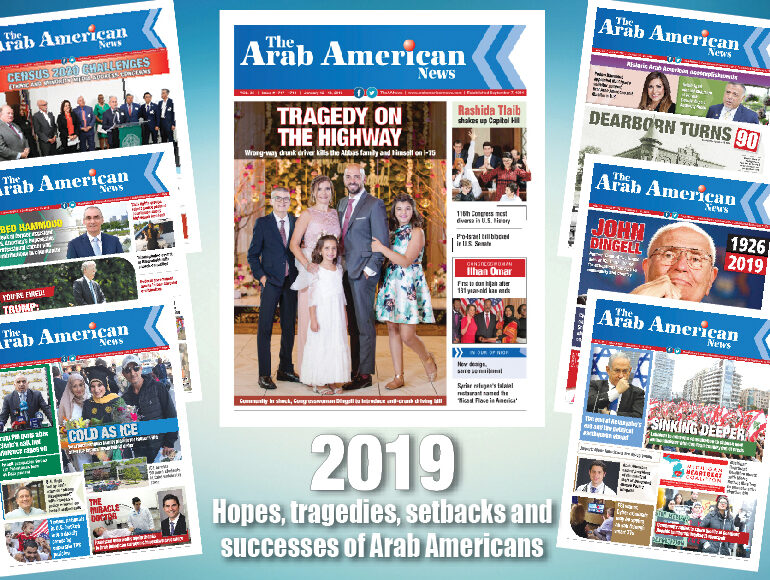 Top local stories in 2019 included the 35th anniversary celebration of The Arab American News. Our newspaper will continue its commitment telling the community's stories in the new decade.

It has been another important year for Arab Americans and we have been fortunate to cover many of the more important issues affecting our vibrant community in Michigan. We hope that with this recap, our readers can gain a sense of the many ways Arab Americans continue to play an integral role in our state, its economy and its lifeways. We do our best to see these issues in an objective light, with concerns to our community at the center. As thoroughly interlinked as we are to our state, Arab Americans share many of the same hopes and fears as any other Michigander, or with any other American for that matter.

Below is a summary of some of the highlights from 2019, categorized by month. All issues are available to be viewed on our website: //arabamericannews.com/flash-newspaper/

The year started out with a tragedy as thousands mourned the passing of the beloved Abbas family at the Islamic Center of America in early January. The family was killed at the hands of a drunk driver in a tragic car accident on 1-75 in Lexington, Kentucky while on their way back home from a vacation in Florida.

AAPAC vice president and Dearborn notable Fadwa Hammoud made history by becoming the first Arab American and Muslim solicitor general in U.S. history. She is part of a new investigation into the Flint water crisis along with Wayne County Prosecutor Kym Worthy.

Due to a controversial sting operation that many said teetered on entrapment, a Dearborn Heights resident and Palestinian student was detained and subsequently deported after she signed up for classes at a fake university set up by the federal government in Farmington.

Thousands of mourners lined up to pay tribute to a “a true hero”, former Congressman John D. Dingell

Many lined up at the Ford Community and Performing Arts Center in Dearborn to mourn the passing of the longest-serving member of Congress in U.S. history, John Dingell Jr. The former Congressman was known as a friend to many Arab Americans and the legacy of his relationship with the community lives on in his widow, U.S. Rep. Debbie Dingell (D-Dearborn).

The Arab American News staff, editors and publisher reflected on 35 years as the community’s main source of news, with a gala in March that brought together many friends, supporters and community leaders in celebration of the paper’s long history.

A resolution drafted by two Dearborn Heights City Council members stirred controversy, debate and a fiasco that has lasted the better part of an entire year. The resolution sought the services of a private law firm to conduct a forensic audit into the city’s book after allegations of misappropriation of funds were levied at Mayor Daniel Paletko’s administration. After many legal battles, the mayor has yet to sign the resolution.

The local Arab American community mourned the loss of one of its influential and successful leaders, Mohammed Turfe, who died at the age of 88 on Wednesday, March 27 after a two-year battle with pancreatic cancer. Turfe was one of the main founders of the Islamic Center of America at its much smaller original location on Joy Road in Detroit in 1950. The ICA’s current location in Dearborn is considered to be the largest mosque in North America.

U.S. Rep. Debbie Dingell (D-Dearborn), a dear friend to the community, held her first community iftar dinner at Byblos Banquet, pledging to make the event and annual tradition. Other Michigan politicians held their own Iftar dinners, joining in acts of solidarity with Muslim Americans as they observed the holy month of Ramadan across the nation.

Creators Yasmeen Kadouh and Rima Imad Fadlallah launched their new podcast to much local and national attention. The podcast continues to be a success and has encouraged other Arab Americans to tell their stories through the format.

Attorney and AAPAC President Mona Fadlallah was appointed a part-time magistrate in the 20th District Court.

Local politicians joined a conference organized by New Michigan Media in its effort to highlight the importance of the 2020 Census for local ethnic communities. The census efforts will ramp up in the coming months and The Arab American News is committed to doing its part in getting the word out about complete count efforts in Metro Detroit.

As he prepared for August primary election in Dearborn Heights, City Council member and real estate superstar Dave Abdallah reflected on his career and the many ways he cherishes his service to his community. Abdallah went on to maintain his seat on the council in November’s general election.

We covered primary races in Dearborn Heights and Hamtramck, two Arab American hubs in Michigan. Other communities around Metro Detroit also geared up for primaries, with many cities seeing influxes of Arab American businesses and residents.

Community leaders, including our publisher Osama Siblani, met with federal officials to discuss their concerns about the so-called terrorist watchlist and its implications for the community’s civil rights. Much was revealed in ensuing weeks about the watchlist, including the sale of the information held on federal servers to private entities.

Abed Hammoud: A look at the former assistant U.S. Attorney’s career and contributions

Judge Helal Farhat: A brilliant career at a young age

At his investiture ceremony in Dearborn, Third Circuit Court Judge Helal Farhat, a tireless worker on behalf of justice, celebrated his oath of office with friends, family and supporters.

The ACC celebrated 40 years in 2019. A profile of its operations in the revitalized Seven Mile district illuminated the organization’s profound impact on the Metro Detroit region. The revitalization of the historic Chaldean neighborhood is just one of ACC’s many projects in the tri-county area, focusing on immigrant and refugee resettlement and important public health and behavioral services.

The Arab American Political Action committee celebrated is 22 years of commitment and service to the community at a dinner gala in Dearborn. The organization also gave its list of endorsements for the year’s general elections.

The AAPAC-endorsed BRICS Dearborn Schools bond failed by a narrow margin at the polls, while Dearborn Heights maintained the status quo at its City Council and Hamtramck saw new faces on its Council.

Arab American leaders, civil rights advocates and activists seeking justice for the people of Palestine joined in public outrage over an official trip to Israel by the Michigan governor. Whitmer ignored community concerns by not informing it of her decision to visit the country. In December, another Secretary of State Jocelyn Benson took a similar trip without consultation with Michigan’s Arab Americans.

A historic medical trial lead by Dr. Mohamad Bydon, a neurosurgeon and spine specialist at the Mayo Clinic, has yielded miraculous results for a patient who was paralyzed from the neck down due to a spinal cord injury.

After long and controversial preliminary exam, which we covered extensively, a judge in Hamtramck dismissed all charges against Yemeni political activist Ibrahim Aljahim. Aljahim was accused of sexual assault on a high school student with special needs. Wayne County prosecutors have since appealed the judge’s decision.

U.S. Rep. Rashida Tlaib (D-Detroit) joined the family and friends of Lebanese American Median El-Moustrah to plead for humanity as ICE prepared to deport the severely ill father and businessman.