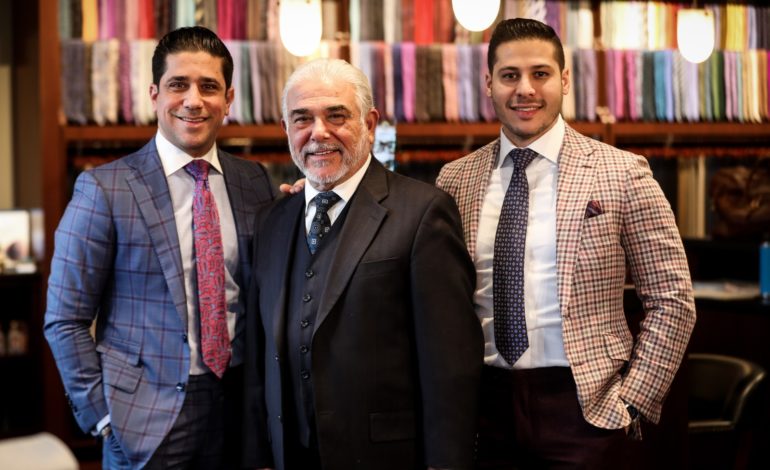 Alex Hamka (left) with his father, Kassem and nephew, Mike Dabaja at his custom clothier shop in Northville. Though his fine custom wardrobes exude luxury and elegance, Hamka’s story is one of hard work, ingenuity and respect for the knowledge and skill passed down through generations. Photos: Imad Mohamed/The Arab American News

Though miles away from the Arab American hubs of Dearborn and Dearborn Heights, the town has its own connections with Michigan’s Arab community, with many flocking to its shopping outlets, not to mention residing and building businesses in the area.

A third generation custom tailor and well known corporate image consultant, 39-year-old Alexander “Alex” Hamka has built quite the clothing empire in this bustling suburb. His custom wardrobe and tailoring business has seen much success and adoration since it opened its doors 15 years ago. The custom wardrobe on offer brings together old world charm, exquisite tailoring and high-end but always on-trend men’s fashion that has been the garb of many a celebrity and business mogul, bringing Hamka much notoriety in the clothing business.

Certainly, a “wall of fame” in the fitting room tells the story of such a rising success, with pictures of notables from Hollywood to the professional sporting world and other grateful past clients of Hamka’s custom clothier business. Behind the flash and pomp, however, is the humble story of working-class grit, ingenuity and constantly evolving business practices that set Alexander’s apart.

Despite the well-crafted media campaign and promotion for his business, Hamka likes to stay out of the limelight, preferring instead to be with his customers or in the back of the shop with his extremely skilled tailors, where its all-hands-on-deck once a custom order comes in. In fact Hamka, a skilled tailor himself, is deeply involved in all aspects of the operations, even branching out with his consultation services and building strong relationships with various manufacturers across the world.

In short, his story is a testament to the hard work and success of many Arab Americans in the Metro Detroit area. The Arab American News visited Hamka, his father, Kassem and nephew, Mike Dabaja at Alexander’s on a snowy Tuesday afternoon.

“I was an apprentice at my father’s tailoring shop, which was in Laurel Park Mall (in Livonia),” he said. “Growing up, I only understood the business second hand. I didn’t realize how important tailoring was till he got sick.”

Kassem Hamka contracted the West Nile Virus when his son was a young college student, pursuing pre-dental studies. Alex left school to take care of the Livonia shop as his father recovered in a hospital for the next eight months. He would go on to teach himself what his father had learned through generations of cloth making and custom tailoring in Lebanon.

“I got the opportunity to dress some very influential guys,” Hamka said. “I found myself extremely happy and began thinking about the future.

“Tailors are a dying breed. You won’t find many. I knew that being good with my hands was a translatable skill. If I had entered the dental field, I would still have to open my own business. On those terms, the two careers were on equal footing for me.”

At Alexander’s, you’re exposed to the best. In the sense that you’re turned on by the idea of looking good. It’s about self-respect and about feeling good. Even the younger generation, Arab American or not, is beginning to understand that putting on a suit attracts a level of respect. — Alex Hamka

Hamka decided to follow his family’s footsteps, which has undoubtedly made many of his local customers grateful. In 2004, he opened his own clothier shop at its present location. Though bringing his family’s lineage and craft with him, opening his own business was about carving out a strong position in the clothing market.

“The goal was to dominate the region and take control,” Hamka said. “I wanted to be known as one of the best tailors in Michigan.”

He had heard of a vacant space in the area, but insistence from some local residents also played a part in Northville being a choice for his new shop. Another impressive aspect of Hamka’s journey is how young he was when he entered the business. At 24, he was the only tailor at his flagship shop, which meant being on the front lines of all customer services, purchasing and bookkeeping.

This independent spirit remains at the heart of the operation to this day, though its scale and scope has increased dramatically. Alexander’s Custom Clothiers routinely works with prominent business people, with companies recruiting Hamka to dress their CEOs and with visitors from foreign countries. Hamka is also partnered with a consulting group that provides etiquette training for such executives.

“My education about the business continues to this day,” he said.

Now a young veteran of the field, Hamka’s focus on his business is as sharp and precise as the lines and curves structuring one of his painstakingly crafted bespoke men’s suits. He was kind enough to give The Arab American News a glimpse into the back end of the operation, where his team was busy applying generations of tailoring practices to expensive fabrics, weaving beautiful thread to conjure yet another eye-catching suit. Kassem Hamka owned a custom tailoring shop in Livonia, where his son Alex ended up learning about the trade

Hamka spoke lovingly in Arabic with one elderly tailor, checking on the progress of an order. “Blueprints” for customized sleeves lay sketched out, as Hamka explained the process, which utilizes in-house tailoring down to the button holes. A lot of the work is done by hand by a staff of tailoring specialists Hamka gradually employed once demand for his suits picked up. Popular television shows like Mad Men and Boardwalk Empire have undoubtedly brought an interest in suits, especially among young men. With this comes a rise in custom shops all over the state. Hamka noted, however, that many of them do not have tailors on staff, something that sets Alexander’s apart. For a price, an Alexander’s customer is able to choose their own fabric, get measured with Alexander’s own proprietary templates and gets custom treatment through the tailoring process in the back.

“It’s important for me to stay sharp, stay in the back room and learn as much as I can from our experienced tailors,” Hamka said. “Our goal is to make sure that when the suits are done, they’re done right the first time.”

In 2015, Hamka purchased the building next door and expanded his showroom. The showroom also features ready made outer-wear, shoes and other accessories for customers on the fly.

The family’s tenacity is reflected in Hamka’s nephew. Bright-eyed and extremely personable, the 20-something Dabaja is a strong presence on the shop floor. No stranger to success himself, Dabaja is a professional accountant and runs the CommonWealth Group accounting firm in Dearborn with his brothers Khalil and Sam. He continues his work with Alexander’s, often drawing clients in need of accounting and financial services from the shop, the place where he learned his business chops early on. Hamka made sure all of his nephews worked at the shop at some point, exposing them to the broader world and people from different cultures and experiences.

“Growing up, we all look up to my uncle,” Dabaja said. “I was lucky enough to learn from my grandfather and my uncle. Not many can say that.

“I do a lot of the tailoring myself,” he added. “I look back at this experience as a blessing. To be able to get it at such a young age, and see their vision — I wanted to hold on to it and not let go. I’ll spend late nights here sometimes, much like my uncle has for years. This place helped me understand the business world in a special way.”

“At Alexander’s, you’re exposed to the best,” Hamka said. “In the sense that you’re turned on by the idea of looking good. It’s about self-respect and about feeling good. Even the younger generation, Arab American or not, is beginning to understand that putting on a suit attracts a level of respect.”

Alexander’s Custom Clothing is located on 124 West Main Street in Northville. Hamka encourages those interested to call the shop and ask about its program.