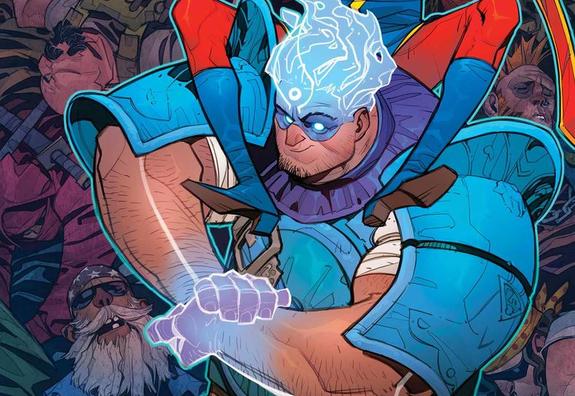 DEARBORN — A new Arab American superhero named Amulet (AKA Fadi Fadlallah) is expected to debut in March, bringing diversity and intrigue to the country’s most famous line of comics.

The character, who is set to make his debut in the 13th issue of Magnificent Ms. Marvel is the creation of the book’s current author Saladin Ahmed and Jordanian American illustrator Sara Alfageeh, who worked together on illustrating and designing him.

Amulet is expected to assist Kamala Khan, aka Ms. Marvel, in the series. Khan is a fictional superhero who became the first Muslim character to headline her own comic book in March 2013. Currently, the storyline has placed her in an alien world struggling to battle an arch-nemesis named Kree Stormranger who spawned from Ms. Marvel’s Spider-Man style suit.

Amulet is a hulking ally who is strengthened by his trademark superhero neckwear. Alfageeh said she expects him to be embraced when he makes his debut this coming spring. She also said she was given creative freedom to design him, which resulted in one of the most unique looking characters in the Marvel universe.

“Saladin let me have a lot of fun with this concept,” she said according to a report from Screenrant.com.

“We talked about his defensive-style powers and how they tied into his background as a Lebanese kid. The blue and white color palette and the circular design were pulled from the Nazar, a symbol that pops up all over the Middle East that protects the wearer from the evil eye — the harmful intentions of others.

“A bit of a historical, supernatural touch. We tend to associate sharp corners and edges with evil, and rounded designs and circles with good. This character is a gentle giant, so I wanted to make sure that even with his size he was shaped like a friend.”

Ahmed called the new character “mysterious” and “fun”, according to Marvel.com.

“Amulet is a fun, mysterious new character who will be playing a role in Magnificent Ms. Marvel for months to come,” he said.

“We’re keeping most of the details of him close to our chests, but I can tell you that his powers are magical in nature and that he is an Arab American superhero from Michigan.”

Marvel Comics holds a special place in Ahmed’s life story as well, the author said to its website.

“As an Arab American who basically learned to read from Marvel Comics, being able to team up with the phenomenally talented Sara Alfageeh to bring Amulet into the Marvel Universe is literally a dream come true. We can’t wait for fans to meet him.”

The Magnificent Ms. Marvel is currently being carried by Green Brain Comics on Michigan Avenue in Dearborn and several other local comic book stores.