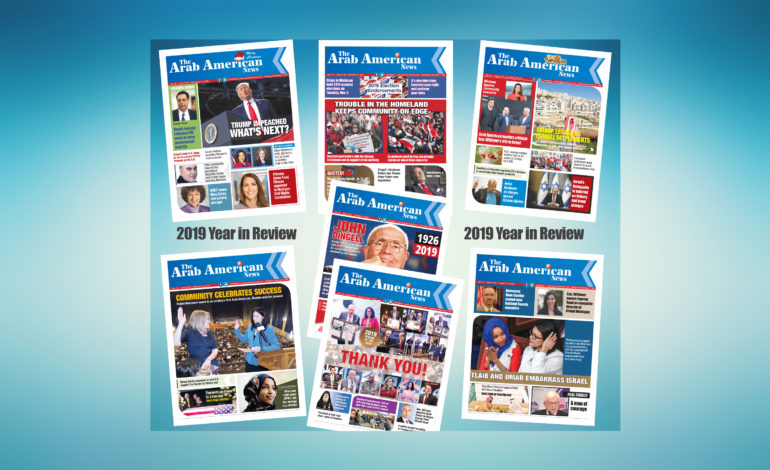 It’s been a eventful 2019 in regards to national stories involving or affecting the Arab American community, with President Trump, U.S. Reps. Rashida Tlaib (D-Detroit) and Ilhan Omar (D-MN) among those making headlines along with a series of controversies involving the BDS movement, Israel’s occupation of Palestine and more.

The following are the biggest and most important stories of the year by month, as covered by The Arab American News:

Tlaib, hijab-wearing Omar sworn in as first two Muslim American congresswomen – Tlaib and Omar were sworn in on copies of the Qur’an as a 181-year old law was changed allowing Omar to wear her hijab.

116th Congress most diverse in U.S. history— A record number of women, 126, were included, along with a record 43 women of color.

Trump reaches deal to end shutdown, threatens another if wall is not built— Government employees head back to work after a 35-day shutdown.

U.S. Rep. Ilhan Omar fires back at Trump as AIPAC controversy continues— Omar sparks controversy with “all about the Benjamins” comment about AIPAC lobbyists’ spending in Congress.

Number of hate groups increases amid rise in White supremacy— Number of active hate groups rose to its highest level in two decades in 2018, report finds.

West Virginia lawmakers nearly come to blows over GOP display linking Rep. Omar to 9/11 terrorist attacks— A photo of the World Trade Center on fire with an inciteful picture of Ilhan Omar displayed at state capitol leads to the resignation of a key state official.

U.S. Census to collect responses in Arabic for first time ever, among 13 other languages— Arabic speakers allowed to submit responses to 2020 Census in their native language.

Muslim soldier suing U.S. Army alleges she was called a terrorist and forced to remove her hijab— Cesilia Valdovinos announced she would sue the United States Army after her command sergeant major allegedly forced her to take off her hijab in front of her colleagues.

Trump gives up on citizenship question on 2020 Census- Trump abandons plans to include controversial question.

Trump’s Middle East envoy Greenblatt, architect of “peace plan,” set to leave post— “The vision is now complete and will be released when appropriate,” Trump administration says about controversial plan.

Rep. Ilhan Omar files for divorce from her husband, Ahmed Hirsi— Congresswoman cites an “irretrievable breakdown” of her marriage.

Report shows how tech companies profit from anti-Muslim violence and bigotry— The Action Center on Race and the Economy (ACRE) releases a report showing the role that Big Tech platforms, Wall Street firms and right-wing media plays in fanning the flames of anti-Muslim bigotry.

Muhammad makes the list of top 10 U.S. baby names for first time ever— Name takes the number 10 spot after coming in 14th in 2018.