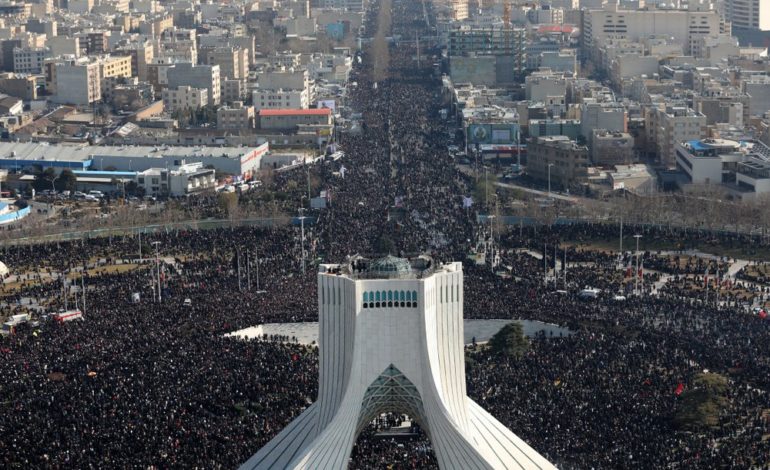 A photo released by the Office of the Supreme Leader shows the immense crowd at Tehran's famed Azadi Square, as an estimated 1 million Iranians gathered in the country's capital to mourn the U.S. assassination of General Qassem Soleimani.

TEHRAN — On Monday, in the wake of the January 2 targeted killing through a missile strike of Iran Revolutionary Guard General and important political figure Qassem Soleimani, throngs of Iranians mourned the death of a beloved leader.

Aerial views and independent reports on the ground told of a vast procession of mourners, a mass that stretched out as far as the eye could see. A million people crowded the streets of the nation’s capital, according to one estimate.

The only thing more palpable than grief were the cries of outrage and retaliation against the slaying of the general, who was close to Iran’s Supreme Leader Ayatollah Ali Khamenei. Footage of Khamanei leading a prayer over the caskets of Soleimani and others killed in the strike shows the religious leader openly weeping while delivering the prayers. The scene played out in the same mosque where prayers were said over the body of Islamic Republic founder Ayatollah Ruhollah Khomeini, after his death in 1989. That ceremony paled in comparison to the crowds Soleimani’s killing brought out in different cities.

Soleimani’s remains were later transported to the holy city of Qom, where another massive crowd broke out. In Tehran, Soleimani’s daughter Zeinab openly called for revenge and called President Trump “crazy.”

“The families of the American soldiers … will spend their days waiting for the death of their children,” she said to the adoring crowd.

Nasrallah said responding to the killing was not only Iran’s responsibility but the responsibility of its allies as well. He said, however, that U.S. civilians should not be targeted.

“The American army is the one that killed them and it is the one that will pay the price,” Nasrallah said, although U.S. civilians in the region “should not be touched” because this would serve the agenda of President Trump.

Uncertainty looms as the world awaits to see just how these threats of retaliation will materialize. On Monday, a letter by a top U.S. marine general circulated that seemed to indicate the country would be backing off its military presence in Iraq, in accordance with a weekend Iraqi parliamentary vote recommending U.S. remove all remaining troops from the country.

Defense Secretary Mark Esper told reporters, however, that no such decision had been made.

“There’s been no decision whatsoever to leave Iraq,” he said.

As of now U.S. officials indicate that they are aware of a possible “tit-for-tat” response by Iran. Protection of U.S. military in Iraq has increased, though no broad recommendations for heightened security at military bases worldwide has been given.