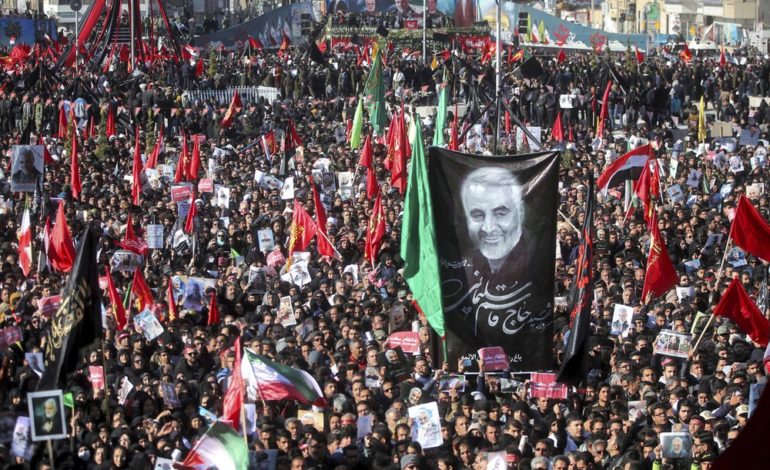 Just a day after this photo was taken in the city of Kerman at a funeral for slain General Qassem Soleimani, Iran launched more than a dozen ballistic missiles at two bases in Iraq that housing U.S.-led coalition personnel. Photo: Erfan Kouchari/Tasnim News Agency

Reuters reports the firing of more than a dozen ballistic missiles from Iranian territory. There is no immediate news on injuries though U.S. officials confirmed the strikes. Iran has warned the U.S. and its allies in the region not to retaliate as a result of this attack. The U.S. acknowledged the targets were Ain Assad air base in Iraq’s western Anbar province and a base in Irbil in the semiautonomous Kurdish region.

Just a day after mass processions crowded the streets of Tehran and other cities to commemorate the death of one of the country’s top leaders who was instrumental in defeating ISIS in the region, Iran’s Revolutionary Guard conducted what looks to be one of its 13 reported strategies. A stampede broke out on Tuesday at Soleimani’s funeral in his hometown of Kerman where more than 200 were injured.

“We are warning all American allies, who gave their bases to its terrorist army, that any territory that is the starting point of aggressive acts against Iran will be targeted,” The Guard issued a warning through a statement on Iran’s state-run IRNA news agency.

The U.S. thus far has warned of possible attacks on key sites in the region, including trade ways and vital routes for global energy supplies. U.S. embassies have been put on high alert and the U.S. military has geared up training and deployment, including the deployment of the specialized Army Rangers.

White House spokeswoman Stephanie Grisham said President Trump had been briefed on reports of an attack on U.S. facilities in Iraq and was monitoring the situation.

“We are aware of the reports of attacks on U.S. facilities in Iraq,” she said in a statement. “The president has been briefed and is monitoring the situation closely and consulting with his national security team.”

In other news, Iran’s parliament has passed a bill declaring the U.S. military’s command at the Pentagon and those acting on those involved in the targeted killing of Soleimani as “terrorists.” The decision serves as counter to an April declaration by Trump to label the Revolutionary Guard a “terrorist organization.”

U.S. officials insist that Soleimani’s murder was justified due military intelligence that indicated his forces planned to attack U.S. targets though no evidence of these plans has been provided.